What If... Conan the Barbarian Were Stranded in the 20th Century? 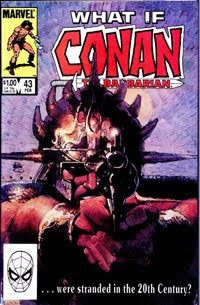 What If? #43's special theme is sequels, specifically sequels to past What If? stories. Later this week, I'll have occasion to update one of those realities (which isn't in and of itself a What If?), but today, we have a point of divergence in a story that was already divergent: A sequel to What If Conan the Barbarian Walked the Earth Today? At the time, that story was something of a hit and the readers were promised in the letters page that we would never see a sequel, in large part because of the character of Danette, based on Roy Thomas' lady love. WIF #13 was in part a love letter to her and she wasn't meant to become a recurring Marvel character. Well, Peter Gillis and Bob Hall had other ideas...

What If Vol.1 #43 (February 1984)
Based on: What If? #13
The true history: In an alternate universe, Conan is temporally transported to modern day New York. With help from a sexy cabbie called Danette, he finds a way to get home. With the police thinking him a burglar, he runs to the roof of the Guggenheim and is hit by magical lightning that sends him back to the Hyborean Age.
Turning point: What if Conan got to the roof minutes sooner?
Story type: Conan Crossover
Watcher's mood: Headlights 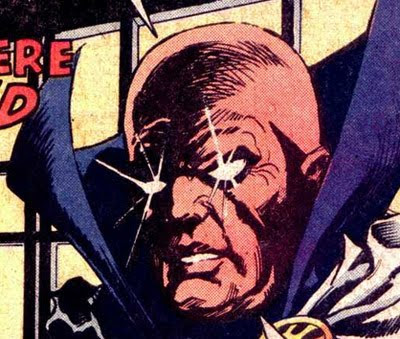 Altered history: In this second generation reality, Conan misses his fateful meeting with a lightning bolt by getting to the roof sooner, and allowing the cops to get the drop on him. Conan fans should look away now. 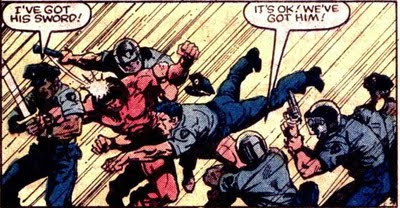 If you thought his getting beaten in a climbing competition by Thor was bad, then I feel for you here too. This isn't going to get any better, just to warn you. Conan is given a hearing where his public defender tries to enter an insanity plea, but Conan isn't crazy, he's just a fish out of water. His non-crazy play: Escaping from the court room!

He soon becomes a criminal, though it takes him a while to learn the language and get the concepts we take for granted. 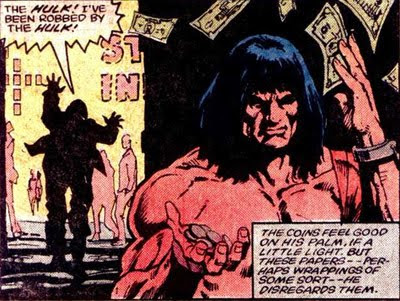 He moves up in the ranks of the underworld, and finally gets enough cash to show up at Danette's doorstep all pimped up. (Told you it was going to get worse.)

She throws him out, of course. Roy's lady isn't into pimp scum. She's not Conan's first or anything, so whatever. Roy can have her (Watcher's note: Roy gets her in every conceivable universe). Conan then decides to start his own gang, and recruits the baddest black bruisers around. They call themselves the Barbarians. They follow him gladly because he has "the spirit of a black warrior". I couldn't make this stuff up if I tried. 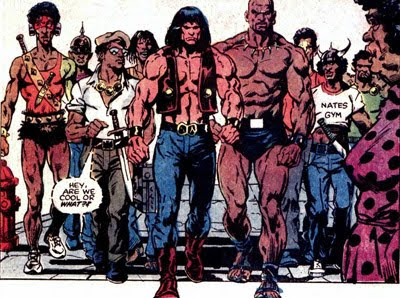 His gang goes on a rampage, and when they try to rob a museum showing a Hyborean exhibition, FINALLY some Marvel heroes take notice. Well, hero singular. Captain America, in fact. 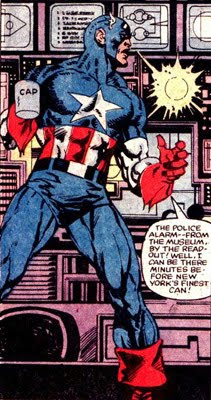 It's sword versus shield with Conan coming out on top, but never landing a killing blow. It ends in Civil War fashion, with Cap convincing Conan to give up and the barbarian walking away. Cap can tell he's a good man at heart, and as the police scratch their heads and bow down to the spirit of '76, he invites him to become an Avenger. Will he or won't he? 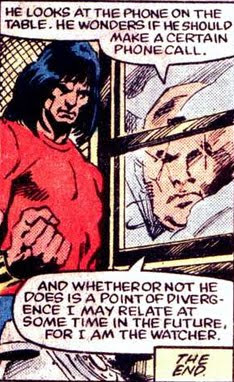 The Watcher never told us. Filthy cliffhanging liar.
Books canceled as a result: Marvel's Conan books take a turn for the worse and the Howard estate take their keys away.
These things happen: Afraid not, though this isn't the last Conan in the 20th century What If story. He'll be back.

Next week: What if Captain America Were Not Revived Until Today?
My guess: "Today" being 1984, I'll say... He votes Walter Mondale.
Comics Conan What If?