What If? Extra! Who Survived Korvac's Reality?

At the end of What If? #32 - "What if Korvac blew the whole damn universe up?" - I made the claim that as everyone was dead, the entire Marvel comics line would have promptly collapsed. My mistake, as there was still one breath of life left in the universe. Yep, survivors. In What If? #43, we get a sequel to that "Everyone Dies" story.

See, when the universe was about to die, some unknown force pulled three people out of space-time. It stands to reason that if you weren't in the universe when it was destroyed, you could survive. And so it was with... Doctor Strange! 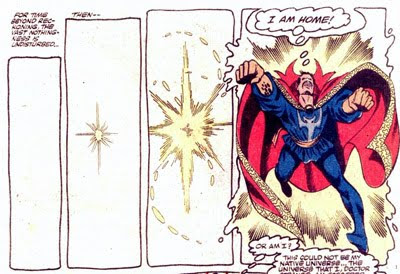 The Sorcerer Supreme flies around the void for a while, pondering the imponderables. It looks like he pretty much failed to protect his domain, but since it was destroyed by science, it's hard to blame him. In time, he meets other survivors re-entering the universe: The Silver Surfer and Phoenix. The new "Defenders"?

Together they lock onto an anomaly in the void: The Ultimate Nullifier. I guess it never destroys itself. But what to do? Strange seizes on the idea of nullifying the emptiness, hoping it resurrects reality (it's magic logic), even if it means the trio would be destroyed doing so. But wait! Here comes the ghost of the universe to stop them! 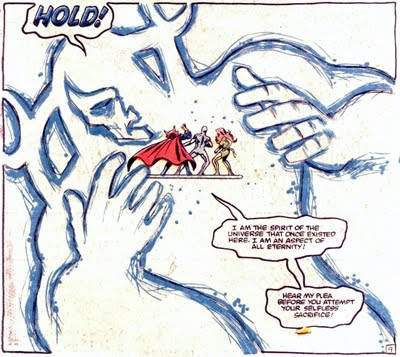 He's in Heaven now and doesn't WANT to be raised from the dead. He just wants to rest in peace and stand as a warning to other universes, a lone headstone in the meta-cosmic cemetery. The trio of heroes decide to respect its wishes and go explore the multiverse in search of a new reality. Phoenix in particular seems keen to find a world where the Phoenix died. Boy, are they ever in trouble. As for Strange, he remains at his post, defending the void from supernatural incursions.

How Buddhist of him.

So no new Defenders. At best, the Marvel universe can dish out the most boring Dr. Strange comic of all time. As for the identity of the unknown force, with everyone nullified, the only real suspect is Mark Gruenwald, revisiting past glories and that fateful day when he destroyed the whole of the Marvel Universe and Jim Shooter couldn't do a damn thing about it.
Comics Dr. Strange What If?