What If... Sub-Mariner Had Saved Atlantis from its Destiny? 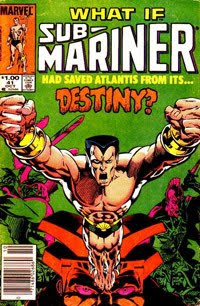 Alan Zelenetz pens this story of the deep, and a young Marc Silvestri does his best impression of John Buscema on the art. There's definitely a Conan the Barbarian vibe to this one, if only because of all the trash talking. If you thought the Conan-Thor team-up was shouty a couple weeks ago, you have no idea what true trash talk is like. This is an issue almost entirely populated with Atlanteans, and where do you think Namor learned to talk?

What If Vol.1 #41 (October 1983)
Based on: The flashback in Sub-Mariner Vol. 1 #1
The true history: Twenty years ago, Destiny attacked Atlantis and sucked Namor's mind right out of his skull. A defenseless Atlantis falls, as Emperor Thakorr and Namor's mom Princess Fen are killed along with thousands. The city is destroyed and the survivors scatter across the seven seas. Years later, the Fantastic Four will find a the amnesiac Sub-Marine living on the streets of New York.
Turning point: What if Namor did a little less trash talking, and a little more thrashing?
Story type: Momentary Difference (give or take an Attuma)
Watcher's mood: Reflective 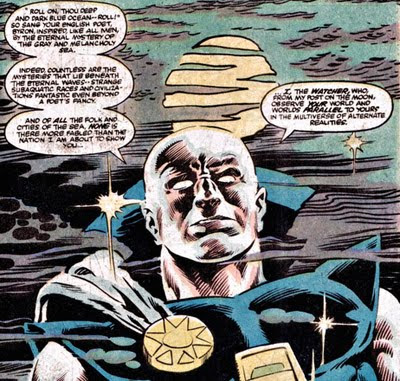 Altered history: In this version of events, Namor doesn't stop to chat with Destiny. He immediately goes for the beat down of the century. Though there is a little trash-talking too.

He follows up by hiding the Crown of Destiny deep under the marine soil. But while he's away, politics have been happening. His evil cousin Byrrah has convinced Emperor Thakorr to make him regent and then given him sleeping pills. He puts Fen in jail, and recruits the help of the Warlord Krang and the High Priest Kormok (who both want to assassinate him at the earliest opportunity and take power) and takes the throne. 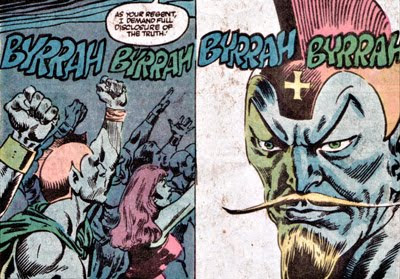 Maybe Namor was taking his time, but by the time he returns, his cousin is parading his signet ring and has turned the population against their rightful prince. Namor's not happy, but what can he do except go to bed? While he's sleeping it off, Byrrah kills the sleeping emperor and drops the murder weapon next to Namor's bed. Krang walks in for the frame up. 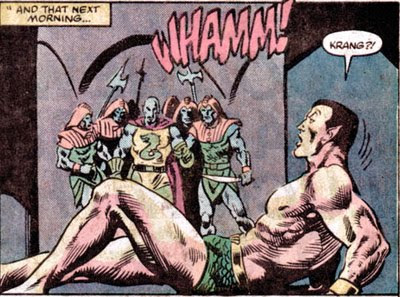 So Namor is forced to flee Atlantis. Neptune appears before him and tries to give him a royal trident to go back and liberate his people, but Subby's mighty pissed that everyone would assume he would have killed his granddad, and he's not going back. Even the Lady Dorma now has a toothbrush over at Byrrah's. Screw them all! Before you know it, Byrrah is taxing the people into destitution and loving it.

Krang and Kormok are about to do something when Attuma the Barbarian attacks the undefended city. 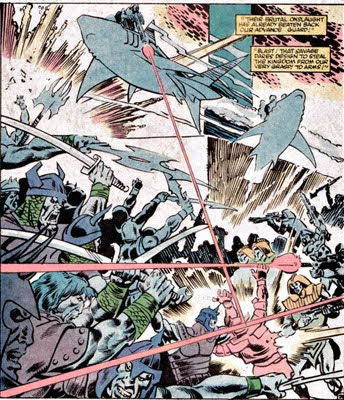 It doesn't go well and they soon sent a party to beg Namor to come back. He's kind of busy looking at blondes, quite frankly. 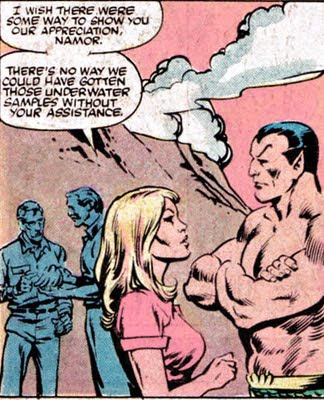 But he weighs the possibility that it's a trap with the idea that Attuma's killed his mom and who knows who else, and finally decides to return. Neptune once again appears and this time, Namor takes the trident. When he arrives, he's all St.Crispin's Day, but the people... 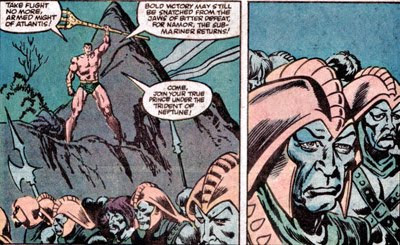 ...well the people just aren't into it anymore. Cue a big ass fight between Namor and Attuma, in which Neptune's trident actually does something. 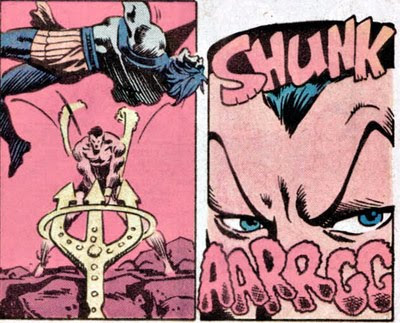 The city is in ruins and the citizens beaten. Will they accept the prince who abandoned them to this fate? Nope. They scatter across the seven seas (seem familiar?) and Namor is left sitting on a throne, the king of rubble.

Aww... As the great Marcellus once said in the censored tv version of Pulp Fiction: "That's pride [long awkward silence]... Pride!"
Books canceled as a result: I don't believe there would be any. Jump ahead 20 years in the timeline, and I doubt Subby's still sitting there. He still gets himself entangled with the FF, still busts Cap out of his ice cube, and so it goes.
These things happen: As a fictional place, it's easy to screw with Atlantis. It's been destroyed multiple times (most recently by Nitro in the 2007 Sub-Mariner series and a Sentinel in Dark Reign). I guess it gets reborn a lot too. Namor has ruled it and been thrown out a few times also. Atlantis' fortunes goes in and out with the tides.

Next week: What if the Invisible Girl Had Died?
My guess: Hell of a time finding the body.
Comics What If?

snell said…
I love how Namor sleeps in the exact same trunks he wears around all day. No time wasted on clothing changes for the Avenging Son!!
September 4, 2010 at 11:19 AM