Reign of the Supermen #14: Byrnified Superman 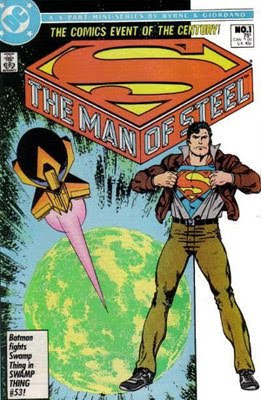 I'd read my share of Superman stories before 1986, but I wasn't a loyal subscriber to any of his series. Then, my fave writer-artist from Fantastic Four, Alpha Flight, et al., John Byrne, jumped ship and rebooted Superman for the post-Crisis era and I was hooked. Getting into Superman from the ground floor was an experience you couldn't really claim to have had before unless you were around in 1938, but here I was, holding the Man of Steel mini-series in my hands and living the dream. His Krypton was an alien wasteland, his Clark Kent a football hero, and his Lex Luthor DC's answer to the Kingpin. It was awesome.

It wasn't without its problems, mind you. While it was great to see all the Superman concepts reinvented, it also played havoc with DC's timeline. Had Superman only been fighting two-bit crooks for all those years before a single supervillain came out of the woodwork? Or was he something of a rookie compared to other Justice Leaguers? Some revamped concepts didn't really work. His Brainiac was lame and his Supergirl didn't really work, but at least he threw us for a loop each and every time.

In a quest to take Superman away from the excesses of pre-Crisis continuity (what the Silver Age wrought), Byrne also changed the nature of Superman's powers, making them more psionic in nature. Superman could lift an outrageous amount of weight, but after a certain limit, would somehow project an antigravity field around the object so that it wouldn't collapse from the stress. His hear vision became a type of directed pyrokinesis, with only his red eyes the only tale-tell sign that he was using it. Over-explaining things? Yes, there's definitely a Marvel sensibility at work, where powers had to be explained to get No-Prizes or be detailed for the Marvel Universe Handbook.

In time, and with each passing Crisis, much of what Byrne (and the writers that supported or followed him) did with Superman passed into the night. Superman once again shoots beams from his eyes and freeze breath from his mouth. He was once again the Legion's Superboy. Supergirl and Krypto also survived Krypton's destruction. Brainiac is back to bottling cities. And yet, there are things he did that have become Superman canon. That Superman is a solar battery, thus explaining why his powers work under a yellow sun. The place his human parents hold in his world. Cat Grant and Ron Troupe. LexCorp. And going all the way back to the beginning, the look of the Kryptonian Science Guild and Kal-El's rocket.

No matter the realities undone since the mid-80s, Byrne left an indelible stamp on Superman and his family of books. Most of all, he's the reason a whole other generation of readers flocked to the Superman books when they were at their ebb, putting the #1 superhero back on the pedestal where he belonged.

(Two weeks in... how m'I doin'? Personally, Reign has been a great motivator. I hope you're having as much fun with it as I am.)
Comics Reign Superman

twistyarm said…
You're doing great Siskoid; this is as much fun as your ST episode reviews! Long live the Supermen!
November 3, 2010 at 11:30 AM

As for today's installment, I have to say I really liked the reimagined Brainiac. I suppose he might have come into his own under the pen of Roger Stern, but I thought that version of Brainiac was one of the highlights of the era.
November 3, 2010 at 1:16 PM

Dan said…
Byrne's Superman was good, but his Lex Luthor was effing great. The "Lex rejects the notion that Clark and Superman are one and the same" story and the one where Luthor is so casually and mercilessly cruel to a small-town waitress (and then at the end you find out that this is kind of a hobby of his) are two of the best Luthor stories ever.
November 3, 2010 at 2:08 PM

Siskoid said…
Matt: I did like the green, blond, bearded Brainiac, but his start as a carnival act (in pink!) was definitely not on my list of best redesigns.

Anonymous said…
I'm very much liking the Reign of the Supermen. I don't see it getting stale since there are so many peculiar takes on Superman over the decades, so keep them coming.
November 4, 2010 at 5:20 AM

LiamKav said…
I prefer a lot of the reinvention Byrne did to the Superman mythos, but then again I am only (just) 30, so i guess I'll always have nostalgia for that (and Wally West) in a way that the 40-something DC writers won't.

Also, the Byrne Superman seems to be what influenced the DC Animated Superman, and Lois and Clark Superman, who (to me) said the line that defines how I think of him:

"Superman is what I can do. Clark is who I am."

Making Clark a functioning human was the best change made. Pretending to be an absolute moron 90% of the time was just... silver age.
November 4, 2010 at 12:52 PM

Jeff R. said…
I guess I'll have to make the vigorous case against the Byrne version, then.

I. Turning Krypton from a place of wonders whose loss was a great tragedy for Kal-El and the entire universe into a thing of dystopic sterility who's destruction comes mainly as a relief was almost as boneheaded a move as possible.

II. Making Luthor a powerful businessman was a great idea. Making Luthor _only_ a powerful business man was a horrible one. Superman needs for his archenemy to be a genius inventor, not just someone who buys the work of other geniuses. (Alan Moore, armed with only a two-sentence description of what Byrne was going to do, got the character right and gave us what he would eventually slide into...) If Byrne wanted a pure kingpin figure, Morgan Edge was available.

III. Byrne had no right to destroy and forbid load-bearing pieces of Legion continuity, darn it. And besides that, taking out that early career, the time spent with peers from the future, and most importantly the early friendship with Luthor. [Luthor is not supposed to worry Superman just because he's trying to kill him, but because he represents his greatest failure: but for him, Luthor might have been a great man.] The details with the hair were silly, sure, but the underlying psychology was a loss that eventually had to be restored.
November 4, 2010 at 2:11 PM

The nice thing with the multiple versions and timelines is that we can have a Last Son of Krypton AND an inventor Luthor AND a childhood friend Luthor AND a businessman Luthor AND both a sterile and a lively Krypton and enjoy stories from all those versions (for example, I really like the Krypton destroyed by its computer Brainiac from the animated series).

There was potential for stories in the sterile Krypton etc., while writers today find more potential in different versions. They'll tell those stories until the well runs dry, then find new avenues.

Current continuity seems to have migrated towards a certain consensus mixing pre-Crisis, post-Crisis, movie and television (Smallville) elements of the character.
November 4, 2010 at 2:29 PM

LiamKav said…
Yeah. I read "Birthright" thinking that some of it was better than Man Of Steal, some worse.

Mainly though, I was thinking "why?" Marvel don't republish Spider-Man's origin story every 15 years, sending fans into a tizzy as to whether the name of Uncle Ben's killer was revealted or not. With the occasional horrendous mistep aside (I'm looking at you, "One More Day"), Marvel Big Events seem to be "what can we do with the universe now?", rather than DC's more backward looking "what can we change about the origin of our universe now?"
November 4, 2010 at 3:04 PM

LiamKav said…
I'm also guessing the reason for removing the Legion stuff is that is overly complicates Sueprman's origin without really adding anything. I don't think any version outside the comics has ever used it, even in something like the Animated Superman where they spent the entire first episode with Clark just being a baby.

(And yeah, I know that there was a cartoon about the Legion that was supposed to be quite good. I can't say if it added anything to Clark's character though.)
November 4, 2010 at 3:06 PM

Jeff R. said…
Liamkav: So exactly which war did Flash Thompson serve in immediately after high school, and how old is he again?
November 4, 2010 at 3:30 PM

Sea-of-Green said…
My favorite episode of that series was Supes "first meeting" with Batman. Mockingbird was, and remains, an interesting footnote in that meeting -- Byrne's own attempt to create his own over-the-top Batman villain.
November 4, 2010 at 3:32 PM

Liam: As Jeff says, Marvel retcons its properties too, it just doesn't normally make an event of it. Nor does DC ONLY do retconning events.
November 4, 2010 at 4:27 PM

LiamKav said…
The Flash thing (and Iron Man's origin) is a bit different. Whenever you tie a characters origin into a war it creates issues after a few years. It's an unavoidable issue when you have a sliding timeline. It's annoying, but unless you want to go the Nick Fury route it's unavoidable. It's interesting that DC have far less instances of people being tied to wars, apart from obvious stands outs like the JSA.

And fair enough, DC events aren't solely We Are Now Changing Continuity. But the 80s had the first crisis, the 90s had Zero Hour, the 00s had Infinite Crisis... I'd say rebooting history every 10 years is a bit too much. Yeah, it means that if you don't like a certain aspect of Batman's origin you can wait around knowing that it's likely to be retconned out in a few years, but it also means you can't get attached to it.
November 4, 2010 at 5:03 PM

suedenim said…
Obligatory comment: Remember that Marv Wolfman and Jerry Ordway, who were doing Adventures of Superman at the same time Byrne was doing his titles, deserve a good portion of the credit and/or blame for "Byrne's Superman."
November 4, 2010 at 8:58 PM

Siskoid said…
Which is why I both mentioned them (4th paragraph) and used the word Byrnified as opposed to "Byrne's".

Craig Oxbrow said…
The first episode of The Animated Series actually made me cry, with the family giving up everything to save Kal-El.

(Probably didn't help that I saw it a couple weeks after visiting my brother, sister-in-law and three-year-old niece on the other side of the planet. But damn.)
November 6, 2010 at 2:15 PM

Siskoid said…
At least that planet didn't blow up.

I didn't read it as it was released (still a Marvel guy then) but have read most of it via backissues and trades.

What it boils down to for me, and the reason I like it, is the emphasis it put on Clark Kent, the man. Like LiamKav quoted: "Superman is what I can do. Clark is who I am."

For all the little changes that kinda bug me (I love Byrne's Luthor but wish he'd been more of a mad scientist too, some of the psionic explanations get too nitpicky even for me) they are worth it to get that complete 180 on the relationship between Clark and Superman, and that's something that, for the most part, has stuck, even after most of Krypton has been brought back.

I love the idea that Superman is the secret identity. Plus, it's such an elegant way of explaining away the whole "how good a disguise are glasses, really?" thing: no one has any reason to believe Superman isn't just Superman.
November 9, 2010 at 10:51 AM

Michael May said…
I'm finally getting caught up on blog-reading and am VERY much enjoying this series. Love it!
November 12, 2010 at 4:15 PM

Siskoid said…
As I consider you one of the blogosphere premiere Conoisseurs of Cool, I'll take that as a high compliment.
November 12, 2010 at 4:33 PM