I got The Pacific in time for Remembrance Day, but sadly couldn't watch it on the day itself. I don't get HBO, so I'm coming to the long-awaited sequel to Band of Brothers fresh. 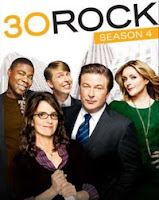 DVDs: Every week, it seems like I flip a tv series, and this week, it's 30 Rock Season 4. It continues to be my favorite comedy series and additions to the supporting cast last year have been a delight. (I mean, how can you not love a Julianne Moore/Elizabeth Banks combo, or a Buzz Aldrin guest appearance?) I don't feel like it's getting tired, at all. The DVD features commentary tracks on 10 of the 22 episodes, varying in quality, but usually funny, depending on your patience for false facts, giggling, and interviews with Lorne Michaels. There are also deleted scenes, behind the scenes at a couple episodes, the Tennis Night in America video, a photo gallery, and a full episode of Ace of Cakes featuring 30 Rock's wrap party.

ur Asian film this week was The Warlords, a bleak historical war epic starring Jet Li, Andy Lau and Takeshi Kaneshiro set in the late 19th century. The focus isn't on the action, even skipping important battles with time cards, but on the friendship and betrayals of three blood brothers who changed the course of Chinese history. Where there is action, it's pretty awesome. And where there isn't, the acting more than makes up for it (nice to see Jet Li being allowed something other than "stone face"). Though our Western backgrounds mean we don't know anything about the pictured conflict, this has the feel of a Saving Private Ryan, that shows off the realities and hardships of war, though it is at the same time operatic. The DVD features about a half-hour's worth of deleted/extended scenes, and a very good 35-minute behind the scenes feature.

ooks: I finished Time Unincomporated Vol.1... again. I'd left it half-read because I didn't want to read Lance Parkins' notes on writing The Eyeless before I'd read that novel. Well, the chapter wasn't THAT spoilery, but I have a better grasp of Lance's references having just read The Eyeless, so I'm glad I did it that way. He doesn't just talk us through the process of being commissioned for, and writing, a book based on an active property (i.e. Doctor Who), but also gives genuine advice to any aspiring novelist/storyteller. Some of it seems obvious, but probably isn't, though the bits about the editorial process are definitely enlightening. Parkins uses The Eyeless as an example of how and why changes are made and reveals things about his style and its qualities through the discussion. Definitely adds value to this book from Mad Norwegian Press.

Austin Gorton said…
I don't get HBO either and am hoping to get my hands on the Pacific soon as well.

Season 4 was actually the first season of 30 Rock that I watched. I chose Studio 60 back in the day, and then was reluctant (as I usually am) to start a show midstream. But I finally got sick of it winning tons of Emmys and not knowing for myself how good it was so I started watching, and now it's one of my favorite shows.

Siskoid said…
Like you, I initially thought that Studio 60 and 30 Rock were the same show and that I had to choose one to support.