What If... the Alien Costumed Had Possessed Spider-Man? 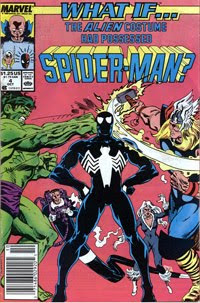 Another "recent past" storyline from the 80s (but we'll see next week that it's not what Volume 2 does exclusively), this time by Danny Fingeroth and up-and-comer Mark Bagley.

What If vol.2 #4 (October 1989)
Based on: Amazing Spider-Man #258
The true history: When Spider-Man's symbiotic costume starts giving him trouble, his girlfriend the Black Cat recommends he go see Reed Richards. Richards uses a sonic device to isolate the creature and reveal its true nature. Spidey goes back to his original costume, and the symbiote eventually becomes Venom.
Turning point: What if the Black Cat didn't encourage Spider-Man to go see Reed Richards?
Story type: Slayer
Watcher's mood: Shiny foetus 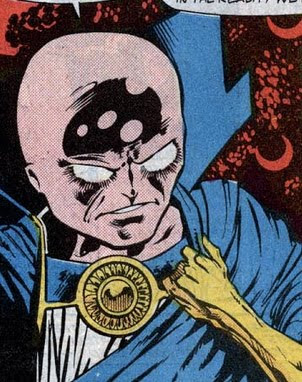 Altered history: Because the Black Cat doesn't suggest Reed Richards as a possible avenue for help early on, Spider-Man goes to the Baxter Building on his own at a different moment. Reed isn't there, so he goes to see Dr. Connors (the Lizard) instead. Connors doesn't come up with any answers and so it's only days later that Spider-Man finds Reed at home, and by then, it's too late. The symbiote has permanently bonded to him. 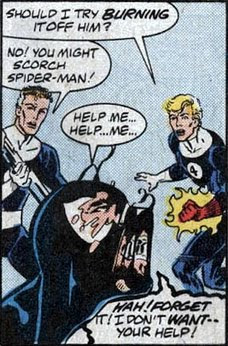 The combined scientific and mystical expertise of Richards and Dr. Strange are unable to free Peter Parker from the symbiote, which is now completely controlling him. It escapes. Later, Dr. Strange is about to send the Hulk to the Crossroads dimension when the possessed Spider-Man arrives and pulls the Hulk out of the wormhole. It releases a spent Peter Parker and takes over the Green Goliath. 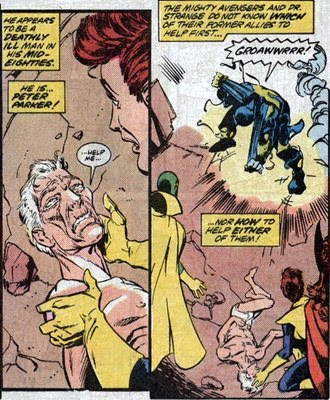 The Hulk-symbiote jumps away, while the other heroes are left caring for an aged Spider-Man. Peter Parker is now older than his dear old Aunt May, so he goes to visit her one last time. 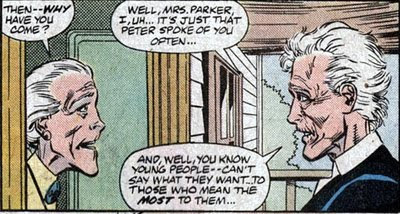 Within days, he's dead of old age. The Black Cat shows up at his funeral and leaves with the Kingpin. He can offer her something no one else can.

Reed Richards builds a better sonic weapon to use against the symbiote, and he and the Avengers track the creature down. There's a big fight at Mount Rushmore where the symbiote lets Bruce Banner go, drained of gamma energy, and bonds to Thor instead. 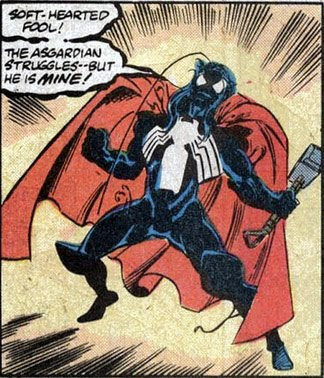 It's too powerful now and neither the Avengers nor Reed's gun can do much to it. So he brings in the biggest sonic gun there is: Black Bolt. 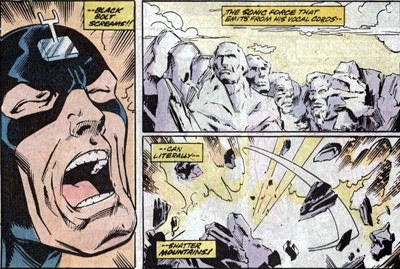 Thor is released, and the symbiote weakened. Dr. Strange prepares to send it to the Crossroads dimension where it won't be able to do any harm (I guess he needs to finally cast the thing so he can free a slot for another 9th level spell). 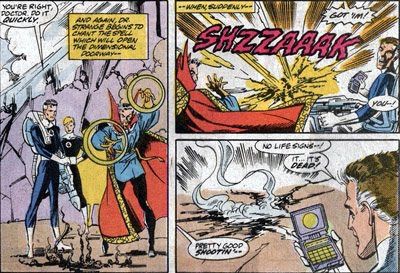 SHZZAAAK! That's the sound of the Black Cat killing the symbiote in revenge. She stole the schematics from the Baxter Building and had the Kingpin's guys build her one. In exchange, life-long servitude. What is it with Spider-Man's romantic entanglements and deals with the devil?
Books canceled as a result: Spider-Man's books are all canceled (bring in the clone!), as are any future Venom projects (and there was some rejoicing). I think the Hulk will survive this. Bruce Banner can never really be free from his curse, and I doubt he was drained "forever".
These things happen: Though the symbiote would go on to develop a "personality" of its own and infect a variety of individuals, it never actually possessed Peter Parker himself. Superhumans it did bond with (or try to) over the years include Ms. Marvel and Franklin Richards.

Next week: What if Wonder Man Had Not Died?
My guess: You mean he's dead?
Comics Fantastic Four Hulk Spider-Man Thor What If?

Nik said…
The second series of What If was hit or miss but this one always was a real favorite of mine. We weren't quite in the "all crossover all the time" era yet and so seeing the entire Marvel Universe trying to take down the black costume was pretty cool. And Thor ROCKS the Venom look! It's like Gene Simmons with a hammer!
November 13, 2010 at 3:12 PM

Anonymous said…
Despite the really depressing parts, this issue was a lot of fun. Issue 1 aside, I think What If...? vol. 2 had a really strong first couple years.

Shlomo Ben Hungstien said…
come to think of it the alien costume kinda reminds me of that "tar" creature (Armus)that killed Tasha Yar. by the way Siskoid do you know if Kahn: Ruling in Hell #2 has come out yet?
November 13, 2010 at 10:08 PM

snell said…
Yes, Khan #2 was out this very week.