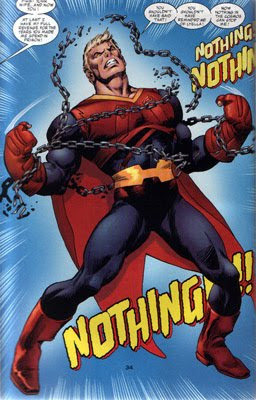 If Stan the Man wasn't using Superman's name and iconography, we would be calling this reimagining an analog. Salden is a police officer from a super-advanced, high-gravity planet who accidentally follows a (bald) criminal (who killed his girl) onto a "space-time bender" powered by a green element. He finds himself on Earth where our weak gravity gives him the ability to fly and great strength and speed, and where our thin atmosphere gives him the equivalent of super-senses. To boot, the guy's super-intelligent and learns English in a manner of minutes. Only 26 letters in the alphabet? Rudimentary! Lois Lane also features as an eager agent for this overnight media superstar. She names him Superman while Clark Kent is a name he chooses for himself based on street signage.

I think Stan Lee's best bit is why this Superman becomes a superhero (aside from already being a cop). He wants Earth to start putting money into their space program so that he can eventually get home. However, he finds that we spend most of our money on fighting crime and wars! So he'll get THAT under control, and hopefully a Terran space-time bender will be just over the horizon.

Adam Hughes designed this Superman's look, knowing that the art chores would go to John Buscema. So he made him look tough and rugged, as befits Buscema's art. Stan wanted a Kryptonian Clint Eastwood. Hughes' uniform was inspired by the Royal Canadian Mounted Police's, but that's rather subtle in the finished product. The scar on his face makes an "S" shape, an idea from editor Mike Carlin.

The Just Imagine Secret Files show that no matter who Superman really is, he's gonna make people freak out about his ability to lift cars. 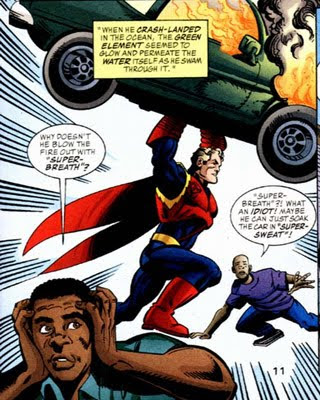 Siskoid said…
Hey, don't be shy about ripping the scans right off this blog. Reign has some crossover with your latest (and most brilliant) 365 Days, so you'll find guys freaking out from time to time (I think this is maybe the 4th I've shown to date).
December 30, 2010 at 8:52 AM