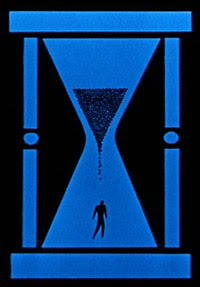 The second DWAITAS (Doctor Who: Adventures in Time and Space) RPG re-formatting I wanted to do (after Voyagers!) is based on the show that got me interested in time travel in the first place, at a very early age: The Time Tunnel. In retrospect, the one-season Irwin Allen wonder ('67-'68) isn't that great (as with Voyagers!, mostly because it doesn't treat either time travel or history with any kind of authenticity), but the two-fisted scientists Doug & Tony were childhood heroes of mine. How to recreate that show with the DWAITAS rules, then?

Tropes
Project Tic-Toc is a top secret government facility buried deep under the Arizona desert. At the center of the project is the Time Tunnel, a gateway to the timestream. In the show, two scientists entered the Tunnel and were lost in time, while back at the Project, a team worked tirelessly to bring them back. Your game can emulate the show by "losing" the characters in the time stream, or it can make time travel more controlled, allowing exploratory teams to go into time and come back safe and sound (the Tunnel IS able to do this). See below for how the nature of time in the show make the latter idea less interesting. In any case, the following elements should be taken into account when converting DWAITAS to TTAITAS:
-Like Voyagers!, Time Tunnel deals with history as seen through the eyes of the movies. The Old West of westerns, the Rome of old gladiator films, the siege of Troi as presented by Homer, that sort of thing. Everyone speaks English. Don't sweat the details.
-Though history is more lethal than it is in Voyagers!, the characters should be able to handle most situations with their fists, or perhaps a short prop sword. Time Tunnel is a world of two-fisted action in the B-movie style.
-History is fixed. Nothing the characters do can change it, and everything they do turns out to be part of established history. In the show, Doug & Tony are always trying to warn people of impending disasters, Japanese attacks, etc. despite the damage this would theoretically do to their timeline. In fact, they will either not be believed, will save people who were originally save, and frequently CREATE the history we all learned in school (they think of the Trojan Horse, for example). Paradox is not a word used on the show.
-In addition to time travel, this is a world where the supernatural (Nero's ghost, Merlin) and aliens exist. It's also a cold war era show with the other side poised to create their own Time Tunnel. Feel free to make use of these.
-Now for the important bit: The Tic-Toc crew. To truly recreate the show's experience, there should be a competent crew back home either trying to bring your guys home, or at least helping them in various ways (see The Time Tunnel for tricks that can be accomplished). These can be handled in one of two ways. First, it can simply be (a large) Story Point expenditure used to justify an equipment dump, NPC disappearance, etc. More fun would be to have each player also play a member of the home team, allowing them to think of solutions and rolling the dice to see if they can successfully achieve their proposed tactics. The GM can throw all sorts of problems their way - anything from exploding consoles to enemy saboteurs to budget reviews - to control the amount of possible interference and give these secondary characters something to do. It should also be possible to divide your total pool of players into travelers and crew, though it would mean alternating between two groups often, or else players being patient while the other scene plays out. 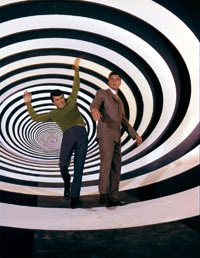 The Tunnel appears to be an infinitely long structure and those entering it while it's active disappear through time in a flash of sparks. The crew can control the reaction to send the person to a particular time, but an uncontrolled trip can cause problems, like the impossibility of bringing the person back. Those sent through time (or "transferred to the Tunnel") seem to fall through the vortex and land (usually in a roll) in the target time period. The travelers are somewhat at the mercy of the home crew. If the destination is unknown, the crew must scan through history until it finds its travelers. Thanks to a viewer superimposed on the Tunnel, the travelers can be watched. The viewer will sometimes show scenes that are relevant to the dangers facing the travelers, but how or why is not known. To force the travelers to transfer to the Tunnel requires a difficult Tech roll to "lock on", which may fail depending on dramatic necessity. Such failures might bring a historical personage from history to the Tunnel's mouth (troubles ensue). If it succeeds, the travelers are pulled from danger and shunted to another time (at random if the travelers are "lost"). Just before they transfer, the clothes they wore when they originally started time traveling reappear on their bodies. Any number of things can interfere with the viewer and the Tunnel's operation. In the facility itself, there can be technical faults, power supply problems and the like. In history (which includes the future, there seems to be no limit to the range of the Tunnel though Earth and at most its orbit are a constant), Tunnel operations have been disrupted by alien tech, ghostly manifestations and a comet's gravitational pull. But once the travelers have been "locked on", even if they can't be brought back, the crew can usually bring back people and things in their vicinity, or send help (people or equipment) back in time to the PCs.

Because history is fixed, exploratory teams who can choose their destinations and return at any time can be harder to put in danger. The pilot for the unproduced 2002 remake (it's on the Time Tunnel DVD, vol.2) used the idea of a time storm that disrupted history, forcing Tunnel staff (who remembered the original timeline) to go back and fix things (à la Voyagers!). Your own Tic-Toc could function that way, but it would be a totally different game (just as it would have been a completely different show).

Character Sheets
Here are some sheets I made for the two stars. Click on them to double their size. First Doug: 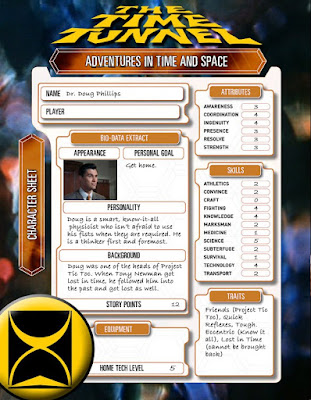 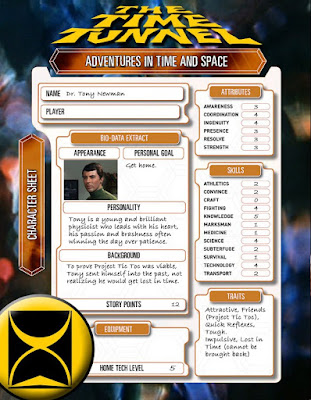 Yes, they have the exact same Attributes. Such was the writing on the show.

And of course a virgin sheet for your own timelost heroes: 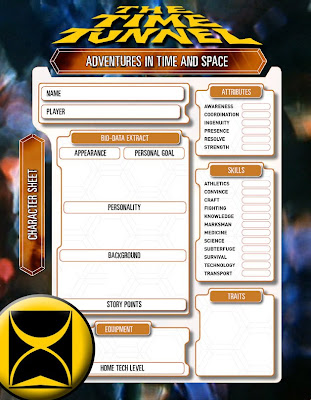 Again, I hope you're enjoying these. Next time, a show that's a little closer to us in time, and a lot closer to people's hearts.
Doctor Who RPGs TV