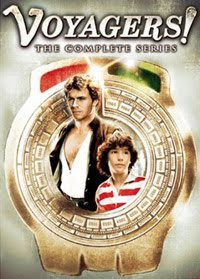 Doctor Who: Adventures in Time and Space (or DWAITAS) of course allows you to run time travel games via a TARDIS, but there are other possibilities. What about Voyagers!, the terrible little time travel show that aired on NBC in the '82-'83 season? Yes, it was badly put together, but the concept can still be used as the foundation for a "time agents" series. This is the first of three alternative settings for DWAITAS I aim to do.

Tropes
Voyagers! features a sort of time agency that (apparently, many things are not plainly stated) recruit people from across human history, make them go through training at "Voyager School" and sends them into the time stream to historical troublespots where they must "fix" history and make sure it goes along the correct path. Each Voyager is given an Omni (a time travel device, see below) and a guidebook full of historical detail (for game purposes, the guidebook gives Voyagers a +2 bonus to their history-related Knowledge rolls). The following elements should be taken into account when recreating the show:
-Though there is violence, there is little to no NPC death in the episodes. Non-lethal solutions should be sought by Voyagers to prevent accidentally subverting history.
-Voyagers! deals with Hollywoodized history. The apocryphal is real, and time periods are closer to our IDEA of them (from movies) than the actual time period. Obviously, everyone in every time and place speaks English (though sometimes with accents).
-While most Voyagers travel alone, small teams have been known to work together. Obviously, the show is about Phineas Bogg taking a companion, Jeffrey, under his wing. They've worked with a Voyager called Olivia as well. So a group of 2 or 3 Voyagers isn't unheard of.
-Stories often begin with a landing years after the deviation, giving players the first act to figure out what went wrong and when, then going back to the correct moment to fix things.
-There is no explanation as to why history so often deviates from established facts. An enterprising GM might lay in slow (or sudden) revelations as to why, expanding from the show's premise. Maybe history is only as it is because the Voyager leadership wants it so (the guidebook is a blueprint for what they want history to be). Maybe there are very subtle enemy time agents or rogue Voyagers out there. Or more simply, it's possible the discovery of time travel has shaken the timeline, creating eddies that threaten to take it off course. The Voyagers may feel responsible for repairing the damage, or want to prevent history from smoothing itself out so that time travel is never invented.
-Don't sweat the details. As long as the big banner events of history happen, it doesn't matter exactly how the result was achieved. 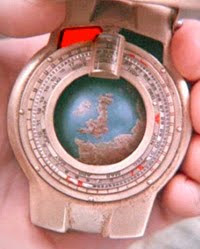 The Omni
In the Voyagers! campaign, the players use an Omni instead of a TARDIS. The Vortex trait is not required to use one. The Omni looks vaguely like a pocket watch. Inside are an indicator of date and place and two lights. If the red light is blinking, something's wrong with history. If the green light turns on, history is proceeding normally. Voyagers can set the Omni to the time and place of their choice, but leaving it on automatic mode will necessarily send them to a deviation in time. Voyagers can escape a situation by simply pressing the button on top of the Omni, but will be sent to an automatic location. They frequently have to deal with two problems "simultaneously", one immediate, and the other which they must "get back to". When the Omni's button is pressed, the Voyager and anyone touching him or her are whisked into the "cosmos", flying through time and space to their new destination. They invariably appear in the air and fall to earth. The Omni will usually find something soft for them to fall onto (a pile of hay, for example), but even when they don't, no injuries are usually incurred. Omnis are set to a range of years a specific Voyager has been assigned to (Bogg's ranged from Antiquity to the 1970s, for example). Omnis have been known to malfunction, especially when they've repeatedly been dirtied. Maintaining an Omni without a guidebook is a Technology roll at -2.

Character Sheets
Here are some sheets I made for the tv show's characters. Clicking on them will double their size. First Bogg: 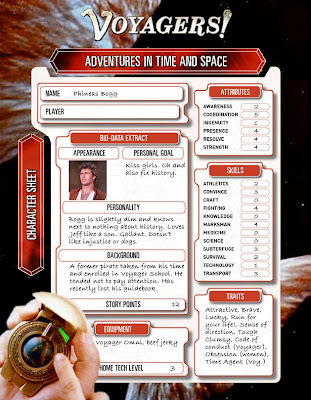 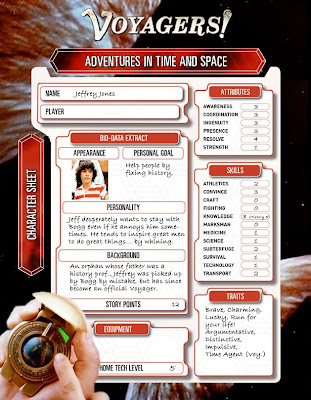 And a virgin sheet for your own Voyager: 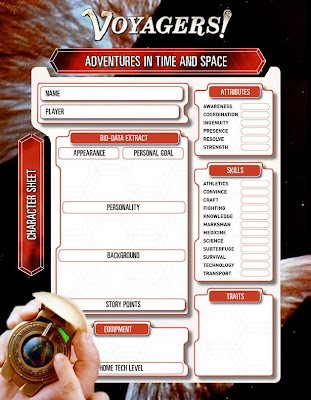 Hope you enjoy them. I'll be looking at a more popular time travel show next time!
Doctor Who RPGs TV