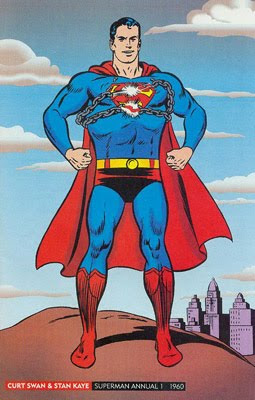 There are really two Silver Ages. There's Marvel's, which featured flawed heroes with personal problems in full-length, even continuing, stories. And there was DC's which embraced the high level of craziness of books like Adventure Comics (the LSH), Haney's Teen Titans, and yes, I think its best poster child, 60s Superman comics. These parallel Silver Ages have things in common: The creation of new characters, the rebirth of the superhero genre, and an emphasis on (completely wrong-headed) science. In the Superman books, the latter was taken to new heights.

A Silver Age Superman story is often 8-12 pages (or else is called a "novel"!) and ends with a twist as contrived as the story's premise. Superman is all-powerful, existing more to foil Lois Lane's attempts at discovering his secret identity than to stop bad guys. Superman isn't used so much as a proper character than as a concept. Stories were frequently ABOUT Superman, as opposed to stories FEATURING him. And so we have a large number of stories that explore his powers and how they might malfunction, about Krypton and what happened/might happen there, about Kryptonian biology and how it can be transformed, about Superman's ability to keep a secret identity with the sole help of glasses and how that silly status quo can be kept in place, and about permutations of the Superman icon like other survivors from Krypton, strange transformations and imaginary stories. The Silver Age Superman stories add a great deal to the Superman "continuity bubble", without really creating a continuity. Lots is added, but nothing ever changes.

I'm part of that segment of the comics-related blogosphere that praises the "pure comics" aesthetic of the Silver Age and the work inspired by it (everything from Kirby's 70s stuff to, say, Scott Pilgrim or Umbrella Academy), and I love to both read and write posts about some wacky, barely justifiable comic book story like Superman Red/Superman Blue or The Two Faces of Superman. And while there are some awesome writers still going that route, the Silver Age keeps on giving. Especially through its Superman books.

Sadly, while DC has given its Golden Age comics its own Earth (and for a good while, integrated it into its sole Earth), it hasn't done the same with the Silver Age. I think they really should. The DCU needs a place where that kind of craziness can exist. Maybe All-Star Superman's Earth?
Comics Reign Silver Age Superman