Reign of the Supermen #80: Superman of Earth-A 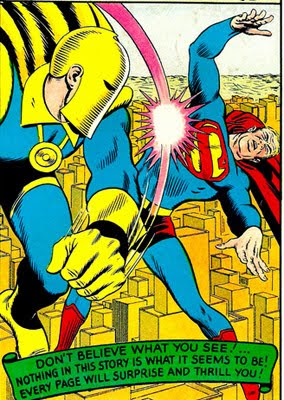 It must be the Silver Age when...

Johnny Thunder of Earth-2 wants to meet his Earth-1 self, forcing his magical Thunderbolt to bring him across dimensions, but Earth-1 Johnny is a crook who takes control of the Thunderbolt to commit crimes! Bad Johnny makes the T-bolt put his Johnny in a coma, and then go back in time to make sure the Justice League's members never become heroes (for Superman, that means keeping Krypton from blowing), creating an alternate timeline he calls Earth-A. The JSA, looking for their late Johnny, come looking for him and discover what bad Johnny's been up to. Bad Johnny makes his T-bolt kick them off Earth-1, but their return disguised as the Justice League (Dr. Fate magically impersonates Superman). Bad Johnny retaliates by sending the T-bolt back in time once again to turn six crooks into the Justice League (how he gives "Ripper Jones" Superman's powers is beyond me). This Bad JLA fights the JSA, but fail because they're not very good at using their powers (in Superman-A's case, he can't withstand Dr. Fate's magics). Though the JSA tries to magically fix history, only the T-bolt can undo his own spell. After a big fight on the moon between Bad Johnny's invented monsters, he gets frustrated at his losses and wishes that the whole story never happened. The T-bolt grants the wish and Good Johnny never even visits his Earth-1 counterpart.

And that's how only you, me and the Thunderbolt know this even happened.
Comics JLA JSA Reign Silver Age Superman