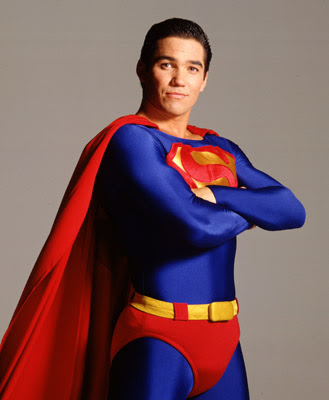 Superman on a conservative TV budget... can it be done? Lois & Clark (a great pun) did it by making the show more about Clark Kent than about Superman, focusing on the romantic comedy aspect of the Clark/Lois/Superman triangle. We don't talk about it much these days, Smallville having taken over the Superman television ideal, but it was a fairly pleasant show. Of course, we mostly watched it for Teri Hatcher, didn't we? 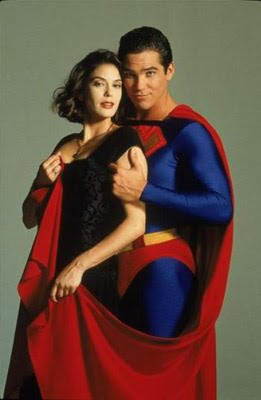 However, while I'd be lying if I thought Dean Cain was in any way the best fit for either Clark or Superman, the show did feature my favorite Perry White in Lane Smith. K. Callan and Eddie Jones made a great Martha and Jonathan Kent as well. John Shea as Lex Luthor followed the post-Crisis businessman model, but with his curly hair, seemed like a younger version of Gene Hackman than comics' bald baddie. And this really WAS a post-Crisis (Byrnified) Superman. Clark became Superman, not the (Silver Age) opposite. His powers were weaker (a by-product of television, but still in keeping with his portrayal in comics post-1986). He had both his parents and they played an important part in his life. Cat Grant, Emil Hamilton, Baron Sunday, Bibbo... And as with the comics, Clark would start dating Lois, tell her his secret, and eventually marry her. Each season brought one of these events to the fore, allowing the romance to evolve. This wasn't a static show. In need of re-evaluation?

Superman Curse: DId the famous Superman curse ever hit Dean Cain? Well, he did wind up hosting the Ripley's Believe It or Not remake. If that sort of television limbo doesn't count as a curse...
Reign Superman TV

Craig Oxbrow said…
It was a fun little show, and he flew really pretty well. Nothing showy like Smallville's super-whoosh rocket flying, just casually leaving the ground and flying off like it was totally natural.

Paul C said…
John Shea was a really great Luthor and Teri Hatcher was a pretty good Lois. It's just a shame about Cain's 'glasses on, glasses off' approach to playing Superman. There was no attempt on Cain's part to play Superman any different to how he played Clark, it undermined the whole thing.
January 9, 2011 at 11:40 AM

Jon K said…
I enjoyed Lois & Clark a lot, but man, did the show start going off the rails in that last season!

You know, I don't get why anyone even thinks there's a "Superman curse," given that only George Reeves and Christopher Reeve had anything happen to them that could be considered a curse... what about Kirk Alyn, the first person to play Superman on the movie screen in two serials? Or Bud Collyer, who originated the voice of Superman on radio, and later did the voice of Superman on Filmation's animated series? Did something happen to either of the actors who played Superboy? Or is the curse so specific it only hits people who play Superman whose last name starts out with "Reeve"?

Shlomo Ben Hungstien said…
i can't disagree more with everyone here. i thought the show was way too campy. i thought the first episode was alright but lost interest in it altogether after the next episode. plus i never like Dean Cain as Superman. he just didn't have the right look for the role. Smallville was fairly consistant with decent episodes for it's first few seasons but since then it seemed like the writers can't seem to take the show in any clear direction. i gave it another shot around the time they were bringing Checkmate into the story and again with that JSA episode. but as usual they only gave you snippets of any story arcs that had anything to do with Checkmate while you had to endure episodes that were otherwise uninteresting. and once i saw the Hawkman look on the show i pretty much just had to turn the TV off.
January 9, 2011 at 1:31 PM

Siskoid said…
The Superman curse is a bit of silliness which is why I'm poking fun at it here.

Curse pushers have invoked some kind of superman suit-wearing ratio necessary for the curse to come into effect, saving radio versions, Smallville stars and even Dean Cain from it.

I suppose those people also extend the curse to other stars, like Margot Kidder's stint as a bag lady. Anything to create a "pattern".
January 9, 2011 at 1:37 PM

LiamKav said…
It might be because I was just the right age for Cain to be my first "live Superman" (too young for Reeve, too old for DCAU Superman) but I always liked him. Sure, he didn't differentiate Clark and Superman much, but I put it down to that oft-quoted "Superman is what I can do. Clark is who I am" line. Superman wasn't really a whole other identity... just a guy doing a job.

Was Cain partially Japanese? Like 1/4? I'm sure I read that somewhere, and if it's true I'm quite surprised that he was even considered to play America's Greatest Hero (sorry, Steve Rogers). Not because I think he shouldn't, but because I thought that the TV companies wouldn't go for it.
January 9, 2011 at 9:32 PM

Siskoid said…
He was born Dean George Tanaka, and according to Wiki: Cain is of French Canadian (hey me too), Irish, Welsh, and Japanese (from his paternal grandfather) descent.
January 9, 2011 at 9:51 PM

LiamKav said…
Aha, I knew it. Still, people who are older than me, was there any comment to someone a teeny bit "ethnic" playing Superman, or am I underestimating the US media?
January 10, 2011 at 6:12 AM

Siskoid said…
It was a different time. I really don't remember any kind of mention that Dean Cain even WAS a quarter-Japanese, or that he was inappropriate for the Superman role based on ethnic criteria.

LiamKav said…
That's cool. I just find it interesting when you compare it to the fury (FURY!) over a black guy playing a clearly real Norse God in Thor.

There was something else I found interesting about the L&C Superman - he had his hair reversed compared to previous versions. Clark had natural hair, whereas Superman had it "styled". Partly because we'd be seeing more of Clark than Superman, but also I guess to emphasise that Clark was the real person.
January 10, 2011 at 9:23 AM

Maki P said…
I remember this show! I used to watch it with my parents when I was a kid; I think it's the reason why I'm such a die-hard Lois/Clark fan nowadays. Ahh, the memories...
And for the record I didn't watch it for Teri Hatcher, I was more interested in Dean Cain's form fitting costume
June 25, 2011 at 8:12 PM