Reign of the Supermen #82: Super-Flash 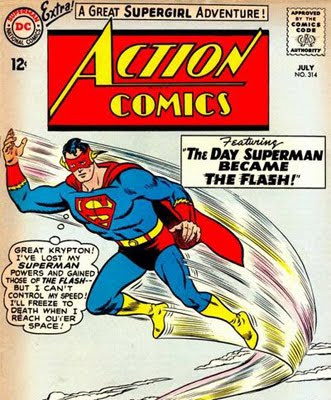 In a story sure to keep Amalgamondays in business for the next month, we discover that Jor-El knew full well what Kal-El's destiny would be if he sent the rocket to Earth/Smallville. In fact, he apparently analyzed what would happen if he sent him a bunch of other planets and chose the optimal superhero role for him.

Not so optimal? Becoming other members of the Justice League.
This week: Becoming the Flash
Landing site: Gangor, a near-duplicate of Earth orbiting a red sun
Adoptive parents: A scientist and his wife
A new life: Kal-El becomes a brilliant young scientist. He and his father discover an "energizing force" that Kal is sure won't harm him (today we'd say it was the Speed Force). Bathed in it, he gains super-speed, puts on a friction-resistant costume (the "S" stands for speed!), and soon loses control of his momentum, speeding into space and without his yellow-sun triggered Kryptonian powers, chokes in outer space.
Final score: F

Come back next Amalgamonday for another of Jor-El's spins on the Great Computer Forecaster!
Comics Flash Reign Silver Age Superman