Reign of the Supermen #84: Super-Menace 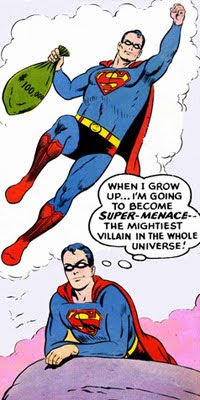 The story of Super-Menace is a piece of Silver Age awesomeness that I can't believe isn't mentioned more often. It retcons Superman's origin to show it bouncing off a spaceship that then fires a duplication ray at it. Yes, you didn't know this but there were TWO Super-Babies who crashed down to Earth. One was found by the loving Kents, the other by a morally objectionable criminal couple called Wolf and Bonnie Derek. 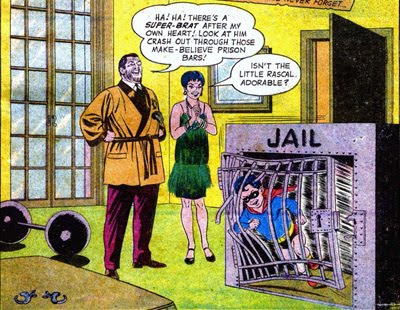 They are HORRIBLE people who don't even give their adopted son a name (aside from Super-Brat) and teach him only to hate and commit crimes, keeping him in a mask all his life so they don't mistakenly take him for the one true Babe/Boy/Man of Steel, and hoping to exploit him for their own ends. He's a quick learner too, soon bringing home his first safe, stealing giant jewels from other planets and throwing giant snowmen down mountainsides to terrorize the locals. 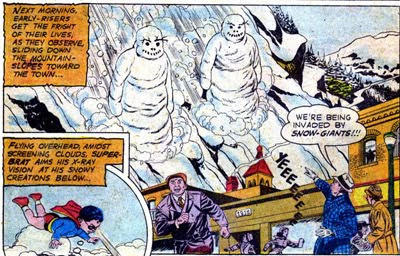 He doesn't get to have a secret identity, so he doesn't go to school or get to socialize with anyone. He grows up in the shadow of Superboy as Super-Bully, just causing havoc and having the Teen of Steel fix the disasters he engineers, but unable to show himself as per his parents' wishes. During these difficult years, Super-Bully discovers he's somehow immune to kryptonite, but though "more powerful" than Superboy, he's still jealous of him. He even tries to steal his girlfriend by posing as Clark Kent, but this is the Silver Age, and he stumbles upon one of Lana's attempts to prove Clark is Superboy... by giving him a box of chocolates filled with kryptonite!!! 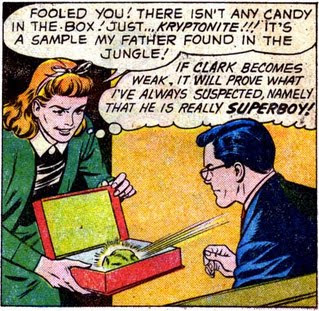 It doesn't work on him, so he's actually done the real Superboy a favor. Attempts at winning Lana, and later, Krypto, fail miserably. Super-Bully somehow makes it to adulthood without ever being seen and become the Super-Menace. He's still causing trouble, like taking over the mob for his dad, vandalizing the Superman Museum and, you know, pushing the Earth out of its orbit. Stuff like that. His dad finally takes off the leash and sends him to kill Superman. The two meet over an easily stompable vein of uranium. 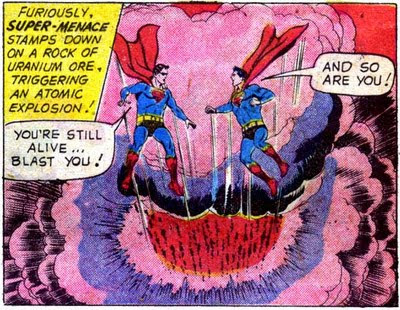 With his x-ray vision, Superman reveals that Super-Menace is a "force manifestation", not a real person, which explains why he's not dying of kryptonite exposure when he brings some meteors down to Earth. Super-Menace realizes he finds no joy in Superman's imminent death and that spark of decency quickly grows. If crime isn't good, then how else did his parents mislead him? He saves Superman's life then flies to his parents', just as they're getting a divorce. That can be rough on any kid, but it's even worse when they start calling him a freak. He commits suicide by "returning to pure force", taking them with him.

And so ends the menace of Super-Menace... in a super murder-suicide.

BONUS! How the tell the real Superman from the fake in this story 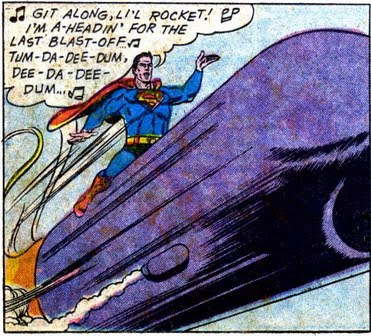 The real Superman always has a song in his heart.
Comics Reign Silver Age Superman

Siskoid said…
It was yellow and chartreuse.