Reign of the Supermen #88: Superman of Aztlan 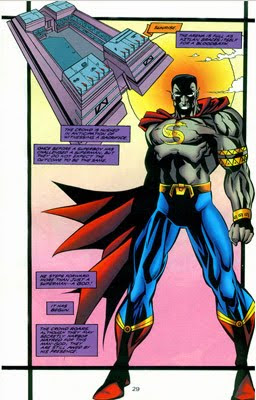 The year is 10859. The world is Aztlan, a human colony that had adopted the Aztec culture. The premiere hero of this world is Superman, a descendant of a metahuman called Sanson who, 500 years before, had passed himself off as the Aztec god Quetzalcoatl to inspire his people to greatest, setting himself and his successors up as men-gods to be worshiped and obeyed. Each generation chooses a successor among the meta-humans of the planet (many his illegitimate children) to become Superboy and eventually, the new Superman.

The current Superman helps people, sure, but he asks for offerings. Luxuries, money and of course, girls. And he also doles out lethal punishments to those who break temple law. And he would be the last of his kind. This was a Superboy Annual, kids! And he would put an end to that dynastic evil!

But that's a story for another day...
Comics Reign Superman