Reign of the Supermen #93: Kal 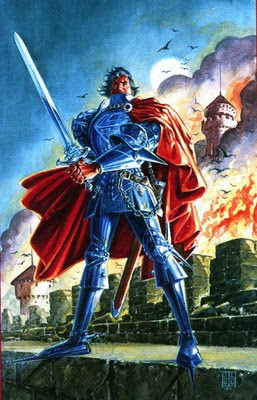 The Elseworld graphic novel that has baby Kal-El land in the Middle Ages would get a high rating for the José Luis Garcia-Lopez art alone, but it does a little better than that by including a scene in which Kal is smothered in molten lead and keeps on fighting. 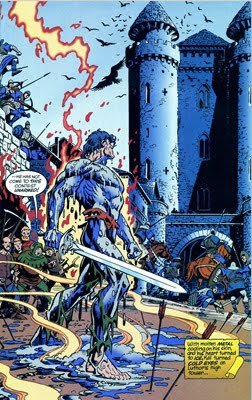 A role-playing aside
I've had an Ancient-to-Middle Ages Superhero RPG idea in my files for a while, and this is the kind of book that makes me believe it could be done smoothly. Of course, characters in fantasy RPGs routinely have "powers" (usually through magic), so what would make such a game a Supers game? Stuff to keep in mind:
-Supers have a strong origin story. Powers (or motivation/skills) should be built into the character's origin.
-Powers follow a clear theme, not the random assemblage of spells and magic items used by fantasy characters.
-Villains should also be built like Supers with the same attention to origin and theme.
-One of the things that separates Superhero RPGs/stories from the rest is the type of motivation characters have. Fantasy characters, for all their "alignments", are often a mercenary lot, looting tombs and fallen foes, taking odd jobs, etc. Fantasy superheroes should be more altruistic, fighting evil or lawlessness for its own sake. Robin Hood, for example, is a "superhero" (well, he's Green Arrow, isn't he?).
Though obviously, books like Thor and Hercules feature both myth and superheroics, those feel more like fantasy characters brought forward into a superhero world. Dave Gibbon's and Garcia-Lopez Kal presents a model for historical superheroics that don't feature magic at all, but rather use science-fiction tropes in a primitive setting. Closer to what I'd like to do than, say, the sword&sorcery League of Justice (though that's a fair model too).
Comics Reign RPGs Superman