Reign of the Supermen #95: Steel 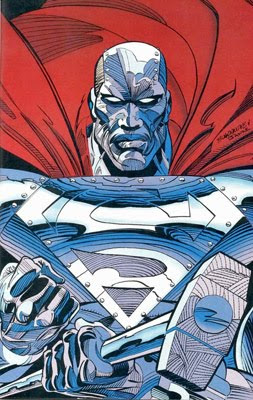 It was perhaps obvious back in the actual Reign of the Supermen that John Henry Irons wasn't the "real" Superman (in fact, none of the new Supermen were), but my money was still on him, as perhaps the receptacle of Superman's soul. Certainly he was the only member of the replacement quartet to espouse Superman's values, even if Superboy eventually followed suit. He looked awesome, he had a great "everyman" vibe going thanks to his armor's blue collar appliances (nails and a sledgehammer), and to this day, I consider him DC's first-tier hero of color (no matter how many times DC puts Cyborg on house ads).

Sadly, after doing his part in Superman: The Man of Steel, events conspired to cut him off from his Super-roots. His solo series had him in an S-less armor (I think none of the looks he's sported have been anywhere near Bogdanove's original design), moving to Washington D.C. and later, Jersey City. Grant Morrison at least his value when he recruited him into his JLA, where John became the team's Tony Stark in more ways than one. John's power, first and foremost, is that he's a great inventor, the kind of guy who could build an armor in Osama's cave and practically did. His appearances in various Superman titles of late has kept him at that level, but haven't really put him shoulder-to-shoulder with other top tier DC heroes.

Giving up his spot to his niece, the Infinity Inc. "revival", none of these stories were worthy of him. This is one of the few DC heroes who got a movie, but in his trademark lack of commercial luck, it happened to be one of the greatest stinkers of the superhero movie genre (no small order). The new Steel title on the stands this month may be another nail in the coffin (literally). First of all, because I don't stare at spoilery solicitations very much, I thought it was #1 of a new series. But no, it's a one-shot, really just the first issue of a Doomsday mini-series. Doctor Who extracanonical writer Steve Lyons has gone on record saying DC imposed a variety of changes on his initial pitch, which had Steel and Metallo (a more sensible match-up) and presumably some kind of direction. Instead, it's a 20-page fight that reintroduces Steel through voice-over and Doomsday as a sort of Super-Adaptoid. Incredibly flimsy. The final panel tries to have us believe Doomsday killed Steel: 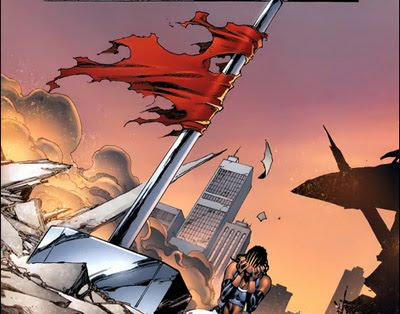 But it might be a red herring. Why reintroduce us to a character, only to have him die within 19 pages? If he's dead, why did Doomsday take his body with him when he took off for the next one-shot? This better not be another "Death of the All-New Atom" DC. I don't know if I could stand another whitewashing hysteria on the Internets even I wasn't a fan of Steel. But really, DC? You now want me to check on his health in an OUTSIDERS comic? Are you INSANE?
Comics Reign Superman

snell said…
As I said elsewhere, Steel's new role in the DC Universe is to get the crap kicked out of him so the audience can see how badass the villain is (see his getting put into a coma by Atlas in the recent Superman(less) storyline). He the new J'onn J'onzz!!
January 23, 2011 at 11:25 AM