Reign of the Supermen #96: Aqua-Superman 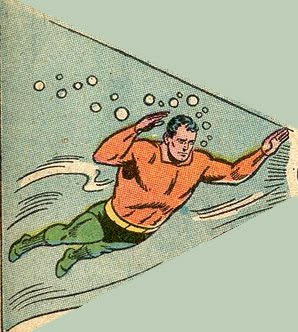 Amalgamondays continue with that same story in which Jor-El checks on what baby Kal-El's life would be like if he sent the rocket to other planets via magic science computer. It's all about becoming different Justice Leaguers, apparently. There is no such thing as coincidence in the Silver Age...

This week: Becoming Aquaman
Landing site: Valair, an ocean planet
Adoptive parents: A nice couple from an underwater city.
A new life: Kal-El can live underwater without problems and even develops the merfolk's telepathy (I'm gonna go for a No-Prize here and say it's because they unlocked that part of his brain with their mind powers) which can be used to control sea life, like his pet whale Gorro. He uses his telepathic and Kryptonian powers to help people in various ways, but he's also got a side-project: Building an underwater mountain so he has a place to sit above the waves to look at the sun and breathe in the fresh air. Jor-El realizes that his son is a child of the open air and would never be satisfied there. 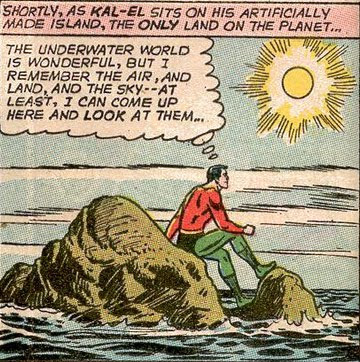 If Earth is an A, then Valair is at least a B+. There doesn't even seem to be any crime there. (As we've learned from Silver Age Aquaman comics, crime is a surface world invention.)
Aquaman Comics Reign Silver Age Superman