Another year, another fake Geek Gala! Put on your virtual gowns and tuxes and take a seat!

Rewarding excellence in stuff I've seen, heard or read this year (regardless of its original inception date - no that's not a pun). As usual, only new material will be up for consideration (or else I'd just listen to the Pixies' Doolittle once a year and be done with it). For television episodes, no more than one per show can be put up for nomination. Other limits may apply. No money or prizes will actually be awarded. Don't try to collect, thanks.

...and the Siskoid goes to: Time Unincorporated vol. 2 (Mad Norwegian Press) - For the second year in a row, I'm ashamed to say I didn't read nearly as much as I would have liked, especially non-genre books. I mean, look at that collection of Doctor Who stuff (all but one). Still, it was hard for an old Whovian like me not to get enthusiastic about "Time Unincomporated - The Doctor Who Fanzine Archives Vol.2: Writings on the Classic Series" (full title). Here's what I had to say earlier this year: "There are inspirational pieces again, but a lot more criticism, both literary and otherwise, as well as humor, re-evaluations, theories and personal testimonies from across many decades and fanzines, and even new essays commissioned for this book. Pretty awesome on the whole, and sure to inspire Whovian articles on this very blog in the coming weeks. The next volume should be about the new series, and I can't wait." Look for volume 3 in this list next year!

...and the Siskoid goes to: Strange Science Fantasy (Scott Morse) - When I participated in the "Read This Too" meme, this was my "undiscovered gem" entry and after the final 6th issue that somehow manages to connect each poetic short story to a loose but cohesive whole. I hope Scott Morse has more such stories in him because I loved the format, the concepts, the art, everything! My 5 Things to Like About Strange Science Fantasy article should tell you more.

...and the Siskoid goes to: A Serious Man (Cohen Bros.) - A Serious Man was my very favorite film of the ten nominated in last year's Oscars. Quoth I at the time: "...an exploration of the incomprehensibility of the universe filled with missed messages from God, whether that God is the Jewish Hashem or the secular power of mathematics. Both are one and the same in this film, and Their presence can be felt in what could easily become my favorite tragicomedy of the year. I'm a sucker for Schrodinger's Cat references anyway." 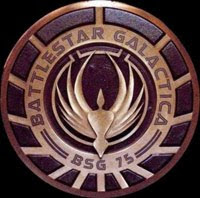 ...and the Siskoid goes to: Battlestar Galactica Seasons 1-4 - Despite everything in the top 5 there being very strong, the fact that I finally saw the whole of BSG this year meant they didn't have a chance. The show has two more nominations below, and hit high marks on every level. A powerful, intricate and satisfying story, excellent acting, stylish grittiness, awesome music and effects... It took no prisoners and pulled no punches. Oh, it wasn't a laugh fest, but it sure grabbed me by the throat and hasn't yet released its hold on me.

...and the Siskoid goes to: The Body (Buffy the Vampire Slayer S5) - A couple of BSG episodes vied for this award, and indeed, a couple of Buffy eps did too, but if anything is going to make me a fan of Joss Whedon, it's got to be The Body. This harrowing, decidedly non-fantastical, episode concerns the death of Buffy's mom and is really about how dull the death of a loved one can be. Whedon plays it without music, extending shots beyond the point of comfort, and directs with Buffy's point of view in mind. It is nothing less than a shocking piece of television, especially for a network genre show. Something gets caught in my throat just writing about it.

Best CD of 2010 - The runners up are...
5. The Gathering (Big Finish's Joseph Lidster)
4. Other Lives (Big Finish's Gary Hopkins)
3. My Hands Are On Fire And Other Love Songs (Old Man Leudeke)
2. Torchwood: Children of Earth Soundtrack (Ben Foster) 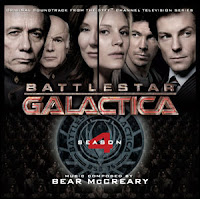 ...and the Siskoid goes to: Battlestar Galactica Season 4 Soundtrack (Bear McCreary) - BSG picks up a second Siskoid! I quickly fell in love with Bear McCreary's music for the show - its strange instrumentation that evoked both ancient and modern tones, and the eventual laying in of Dylan's All Along the Watchtower - which finds its best expression, to my ears, in the Season 4 soundtrack. I could listen to those tracks all day every day, and for a while there, I was.

Stupidest Move in the Geekaverse 2010 - The runners up are...
5. The Daleks' new candy-coated look (BBC)
4. Vote Dalek (UK Green Party)
3. The whitewashing of DC Universe (DC Comics)
2. Female heroes are not commercially viable, so shelve them all (Warner Bros.)

...and the Siskoid goes to: JMS FTW! (J. Michael Straczynski and DC Comics) - Oof, not a good year for DC/Warner, is it? But it's by partnering with superstar JMS that they finally won the award. It all seems too fresh to rehash it all here, but for posterity's sake, here's a quick rundown. DC signed JMS and gave him some high profile characters to play with. With both Superman and Wonder Woman, he basically jettisoned everything iconic about the characters (most importantly, more than 70 years of characterization) and took them out of the equation as far as other books were concerned. Not only were their own books made less viable, but other writers were to keep their hands off them so their appearances became much more limited. In both cases, the story lines were met with apathy and criticism. "Grounded" is especially flawed (follow the link for lots more). Then, in a matter of very few months, DC announced JMS would retire from his books, forcing other writers to work from his notes to finish his one-year stories. A big mess and yet another warning about using star writers recruited from outside the medium (yes, after all this time, I still consider him from outside the medium).

What would YOUR picks look like? Tomorrow: The Technical Awards as given in a ceremony prior to this one!
Awards Buffy Comics Doctor Who Holidays Movies Music Superman TV