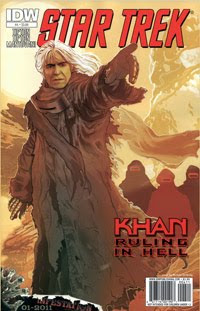 PLOT: Civil war breaks among Khan's people. While those loyal to him prevail on the field of battle, Khan corners the traitor Tamas and kills him. With a smaller population and the dissidents' cave offering a food and water source, they last years in the harsh environment, until the Reliant's landing party finds them.

PANEL OF THE DAY - Trekkie bling

REVIEW: The last chapter is as visual as the rest of the series, which makes sense in that Khan is more a man of action than of words. The desert warfare seems relevant to wars today, but we don't dwell on the larger tactical portrait. Instead, we have a fair-looking fight between Khan and Tamas, and a victory of sorts that explains how the Botany Bay's crew survived to the point where the movies showed them again. No real surprises, just a solid filling in of the blanks and a well-intentioned homage to the character made famous by Ricardo Montalban. As one of four issues, it's a bit thin, but as part of a collection, this will seem like the grand finale of an epic story. Worthy of the great Khan.
Comics Star Trek