Self Christmas gifts continue to arrive in the mail (thanks holiday sales!). I got Richard Castle's two books, Heat Wave and Naked Heat (I must say this is a clever promotional item for a tv show), Alias seasons 2-4, two classic Doctor Who stories - Meglos and The Dominators - Sarah Jane Adventures Series 3, and the films Syriana, The Losers, and Bleu/Blanc/Rouge (the Krzysztof Kieslowski trilogy). Phew! 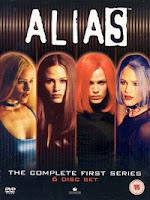 DVDs: Alias originally passed me by, but holiday sales made me get Season 1 (and now the rest). It's an excellent show, with cool stunts and fights, pretty girls and deep conspiracies. Chuck copied a lot from it (successfully adding comedy into the mix), and I love Chuck. Following Alias to its conclusion is going to be my early 2011 project. I do wonder if the Renaissance technology prophet Rambaldi plot line isn't a bit too strange for a spy show, but it's just window dressing to the real story, which is the undercover work. Fact is: Alias comes out of the gate running with an awesome pilot and keeps running (shame about the clip show, though even that has stunts and new revelations). The DVD includes commentaries on 4 episodes, half of them with brief video intros. A 20-minute behind the scenes video diary on the pilot is good fun, as is the featurette on stunts and just how many Jennifer Garner does herself. Deleted scenes, a gag reel and publicity items complete the package.

With Season 2, I find myself really getting into the characters in Castle. The first season's 10 episodes were fun, sure, but the full season worked its magic on the romantic comedy element. I'm in for the duration, as crazy as that makes me feel (a crime drama/romantic comedy thing? ME?! Not since Moonlighting, surely). But here I am actually reading the Nikki Heat books. The DVD doesn't have a whole lot on it, but what's there is very fun (and funny). Dever and Huertas (Riley and Esposito) vist the set, Nathan Fillion terrorizes the crew with silly interviews, and the cast and crew recount their favorite murders and what goes into them. The back copy makes these sound like big featurettes, but they clock in at around 7 minutes each. Still excellent. There are also bloopers, three deleted scenes and the videos from the pop music episode.

Stephen Chow's brand of kitchen sink film-making was on show this week when Kung Fu Fridays showed his much requested Kung Fu Hustle. This thing really does have everything: cartoon sequences and violence, Shaw Bros. style martial arts, musical numbers and lots of CGI effects, a touching romance, zen Buddhist symbolism, a Shining parody and pee jokes. Chow's usual craziness, though I'm guessing Western crowds might have liked it because it feels so random, like a lot of prime time cartoons do. For an armchair expert, there's lots to love, but it's also a bit of a mess. Comes across as more silly than funny. The DVD extras are a mixed bag. The "bloopers" are actually amusing moments filmed for Comedy Central's presentation of the film (matching their short interview with Chow also included). If that brief interview leaves you wanting, there's a half-hour interview done by expert Ric Meyers in which Chow doesn't deliver many answers, so Meyers forcefeeds, and condescends to, the audience. Featurettes on the martial arts, production design and costumes are stronger Chinese-language pieces.

Books: My New Year's resolution was to improve my reading habits and finish at least one book every two weeks (no more than half of them Doctor Who-related). I made the first one, Douglas Coupland's Player One, with a day to spare. Player One (or What Is To Become of Us) is another apocalyptic novel from the Canadian writer, more successful than his previous effort, Generation A, but nowhere near the perfection that is Hey Nostradamus. Written as part of the CBC Massey Lectures (read in university halls and broadcast on the radio), each of five chapters can be read in just an hour. The book paints the portrait of four people trapped in an airport hotel lounge as the world seems to come to an end. As usual, Coupland's writing is crisp, full of humor and pop culture references. Better yet, in this case he waxes philosophical on what it means to be alive in this, our postmodern world. A lexicon at the end has fun with the concepts explored in the book (and more besides), creating psychological abstracts for conditions that could exist in a post-internet universe. Enough to recommend as an entertainment. 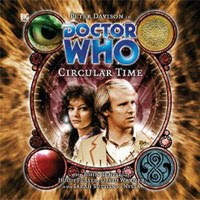 Audios: Circular Time by Paul Cornell isn't your regular Big Finish Doctor Who audio. Instead of the usual 4-part story, we have 4 short stories using the 5th Doctor/Nyssa team, each given the title of a season (though that's not thematically clear). A Time Lord has set himself up as ruler of a society of flightless bird people. The Doctor and Nyssa become prisoners of a truly bad ass, Sherlock-like Isaac Newton. A cricket holiday gives Nyssa the chance to experience her first romance. And in Nyssa's post-TARDIS life, her dreams intersect the Doctor's at a crucial point. Each story is better than the next. The first, Spring, feels a bit unresolved. Summer has a cracking performance from David Warner. Autumn is a quiet character study, sensitively told. And Winter is an awesome and poignant piece that connects to some of the show's more unforgettable 5th Doctor moments. The experiment was (is!) a success, and I think BF wound up doing more short story anthologies like this one.

New Unauthorized Doctor Who CCG cards: 16 new cards from Turn Left. I'm back in the saddle.