Spooks/MI-5 Series 8 just came in the mail, which made for a very long time to wait and see how 7's cliffhanger would play out. And I see Ruth (Nicola Walker) is on the cover. She's back! Sweet! And tired of waiting for Amazon.ca to relist the Doctor Who RPG's Aliens and Creatures, I went for the 5$ pdf (thanks to a Cubicle 7 sale on DriveThruRPG). It's got me all a-twitter for some Whovian role-playing again.

DVDs: The problem with the first half of Alias Season 2 is that it feels so self-conscious about its own complexity. While it may not have been too bad watching week-to-week, back-to-back on DVD, the characters seem to always be regurgitating the same points. There's a lack of confidence there and it's not helped by the severe reduction in action when compared to the first season. But that all changes with a couple of shocking game-changers, a return to great action set pieces and the flocking of movie stars to guest roles. Roller coaster indeed, and not unlike how many an episode is structured (with a resolution, then a new cliffhanger). The DVD includes 4 episodes with commentary tracks (again, solid and no spoilers), a 45-minute making of the finale (which gets us through each step of the production), featurettes on costume and make-up, a few deleted scenes, a well-produced blooper reel, a lame "making of" the video game, and some relatively entertaining radio interviews with members of the cast and J.J.

"Beat" Takeshi Kitano directs and stars in Violent Cop, a 1989 Japanese selection for Kung Fu Fridays, which you could describe as Dirty Harry without the charisma. Violent Cop, like more than one late 80s-early 90s Japanese film I've seen, is raw and almost documentary-like. The director manages a jaded brutality and a stylessness that nonetheless doesn't forget to create memorable shots and lots of tension. Low production values somehow translate into a world that seems strange to my Western eyes, more than Japan usually does. Another plus: The music sounds like Sherlock's. No extras to speak of on this release. 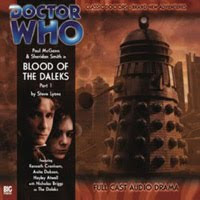 Audios: With Nick Briggs' ascension to the producer's chair at Big Finish, the 8th Doctor is given a new companion (sitcom star Sheridan Smith as Lucie Miller) and a new format based on the New Doctor Who. These 50-minute episodes were released in close proximity to each other (on BBC7), mostly one-parters with a couple of two-parters, and with an overall arc focusing on the companion. Throw in some big stars, a mix of new and old enemies, and future and historical locations, and you've very much got something that could air on tv over the course of 2-3 months like the Davies (and now Moffat) show does. After listening to the first four episodes, I'm also left thinking that I wasn't tired of McGann's 8th Doctor, but rather of his audios' character dynamics. Charlie has been aboard the TARDIS since Doc8 started those adventures and C'rizz remains a non-character to me. The writers may be as bored with that team as I am. 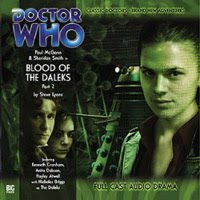 Lucie Miller shows up literally out of nowhere in Blood of the Daleks Part I, sent to the TARDIS as part of a Time Lord version of the witness protection program. What has she seen and who has sent the "Headhunter" after her? Her relationship to the Doctor is thus very different, sort of a Donna to Charlie's Rose, not all that impressed with the Doctor and frequently mocking him. They warm up to each other by the third episode, but for now, their antagonism creates some sparks, and is kept entertaining by writer Steve Lyons and the actors (again, more Donna than, say, Tegan or Peri). The Blood of the Daleks isn't that great an opening story though. It's hard to do something new with the Daleks, and Blood doesn't have much freshness to it. It's ok, but Part I has guest actresses with near identical voices going back and forth, and Part II features a big battle that's just screams and blasters. It's all noise and bluster. Perhaps it needs to be. It's all just window dressing for Lucie's introduction, which is where the interest lies. (Someone attempted a visual trailer for the new duo on You-Tube.) 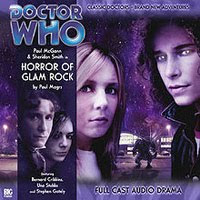 Horror of Glam Rock is a stand-alone episode that takes the Doctor and Lucie to a 1970s roadstop diner known for attracting glam rockers. It's by Paul Magrs (which I have now found out is pronounced "Mars"), so you just know it takes the mickey. The title is only one bit of fun to be had in this audio, along with nice performances by Bernard "Wilf" Cribbins and Una "Sherlock's Mrs. Hudson" Stubbs, and actual songs (including a hilarious take on the Doctor Who theme). Magrs of course peppers this thing with references to music, much of it going above my head. Like New Who episodes, it feels a bit thin at times, with a quick victory over the monster of the week, but as with the television show, the focus on character makes up for it. Up til now, this series has revitalized the Eighth Doctor audio adventures for me. 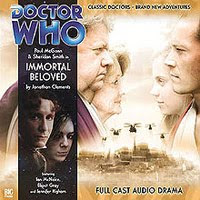 Jonathan Clements' Immortal Beloved takes us to the season's halfway point with a story about young lovers who would rather die than suffer their destiny as receptacles for their brain-switching parents modeling themselves on the Greek gods. Ian McNeice guest stars as "Zeus". Again, the regulars are quite good together (and apart), the wisecracking Lucie somehow bringing a different performance out of McGann's Doctor. If the audio has a flaw, it's that the TARDIS crew are for the most part observers in the drama, rather than being its movers and shakers (at least, until the very end). Still, a well-enough rendered science fiction idea with solid performances from both the guests and the regulars.

Elsewhere on the Net: Jon K interviewed me this summer for a feature he calls "Way of the Geek". And I don't sound too much like a moron! Qapla!

Hyperion to a Satyr posts this week:
II.ii. The Fishmonger Scene
Doctor Who Geekly roundup Websites