DVDs: The thing about Doctor Who/The Monster of Peladon (Doctor Who does The Cloudminders) is that it's so very boring, despite all the business that's going on. The Curse of Peladon really wasn't interesting enough to warrant a sequel, and treading over the same story territory doesn't help matters. I found my attention drifting regularly through the whole thing. There are some good bits, mostly via Sarah Jane, Alpha Centauri and the Ice Warriors, but otherwise... zzzzzz. Better with the commentary on. The DVD has the usual stuff, also including the second half of the making of (the first on Curse) focusing on creatures and characters/actors, a short deleted scene reconstructed from its audio, a clip from an interview with the voice of Alpha Centauri, and a big feature on Terrence Dicks' novelizations (parts of which have been used before, I'm sure of it, it gave me déjà vu).

It's Always Sunny in Philadelphia's 5th season can't be considered its best because of its terribly unfunny last episode, but there are some hilarious moments (the road trip, for example) with America's most horrible sitcom cast (by which I mean they out-Seinfeld Seinfeld, not that they are unlikable or bad actors). Season 5 has more commentary tracks than past seasons, including two with guest-speaker Dr. Drew who attempts to psycho-analyze the sociopathic characters, a gesture that is both futile and very funny. Other extras include 20 minutes of deleted scenes, a blooper reel that is too concerned with corpsing to be of any real interest, and three short videos. The gang's dating video(s) is the best but, though Kitten Mittens on a loop will interest You-Tube/cat fans. The last is a musical montage of behind the scenes footage/photography, slim, though not unpleasant.

Kung Fu Fridays return with the three-hour King Hu classic, A Touch of Zen. Sadly, the DVD is a very poor quality (I hear Region 2 discs are even worse). The picture is murky, dirty and washed-out, and the sound has problems as well. The subtitles are too big and get partially cut off when you try to use wide screen properly. It's too bad too, because you can still tell the cinematography is gorgeous (the last half hour in full daylight looks awesome, trippy Buddhist ending and all) and the locations beautiful, but you do get attention span problems during night scene, and there are a lot of them. This is a movie that takes its time, the first fight only occurring after the first hour, so attention spans CAN be an issue. The story? An unambitious artist falls for the wrong girl, the fugitive daughter of a rebel. Our protagonist spends the first half of the film hoping he's in a romantic comedy, but suspecting he is either in a western or horror film. The realization that he is in a martial picture is nothing less than shocking. From there, the action picks up quite a lot, but all those slow moments at the front end of the picture do pay off. I'll be tempted to buy this DVD again if it ever comes out in restored condition.

This weekend, my KFF crew decided I should hold an Ed Wood marathon, giving me a chance to get through my fat pink boxed set from Hollywood's "worst director". I'm rather a fan of Wood's accidentally bad flicks and had seen the more famous half already. I don't think I need to detail each one in a separate paragraph, so here's what we watched, in bulk. Glen or Glenda? is Ed Wood's surreal assemblage of stock footage, dream sequences, Bela Lugosi framework on top of a psychologist framework, autobiography on the joys of cross-dressing. Awful in every way, which is why it's so wonderful. Jail Bait is Wood's version of a Dragnet episode, showing how boring he can be when he doesn't include fantastical elements (but still of interest because it was one of those I'd never seen and for a particularly gratuitous minstrel show in blackface). Bride of the Monster gives Lugosi a bigger part and adds Tor Johnson to Wood's menagerie, a ridiculous mad scientist film and perhaps the most straighforwardly watchable of his horror pics. After ordering Chinese food, we continued with Plan 9 from Outer Space, his Hamlet (in that it contains Wood's To Be or Not to Be speech, you know the one "Your stupid minds! Stupid! Stupid!"). Then another one I hadn't seen, Night of the Ghouls, which returns us to the old Willows House from Bride and infers that all of Wood's films occur in the same universe/town. It features a Shandu character called Dr. Acula and is about a fake seance turning real in a house that's definitely bigger on the inside (it's in fact a warehouse on the inside). Not in the boxed set, but still pertinent to our interests, was our dessert: Orgy of the Dead. Scripted by Wood (apparently from his novel), but directed by Stephen Apostolof, this is a plotless piece of sexploitation in which Wood mainstay Criswell and Vampira clone Ghoulita spend the night making strippers go through various ethnic dances (in glorious sexycolor). An amazing finish to a long day, aimless and redundant, but the two stars are always fun to watch. As far as extras go, Orgy has a 20-minute interview with Apostolof in which he mentions "mammary glands" a lot, but also gives advice on directing and talks about his relationship with Ed Wood. The boxed set has a disc of extras called The Haunted World of Edward D. Wood Jr. that I didn't watch because I'm all Wooded out. More on this in a later roundup. However, I did watch a 1991 documentary on Plan 9 that's on that film's disc. It's a fun and at time touching 2-hour piece on Plan 9's origins, production and legacy, with interviews with surviving cast and crew, critics, collectors and more. Low production values don't hurt it one bit. 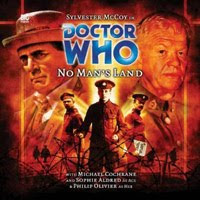 Audios: No Man's Land by Martin Day is an unusual Doctor Who story because it's a historical with no real alien threat. The 7th Doctor, Ace and Hex (one of the better ensembles) land in WWI to deal with a military plot to brainwash soldiers for maximum effectiveness. Sadly, the initial premise of investigating a murder that hasn't happened yet turns out to be a morsel of red herring, but otherwise, there's a good atmosphere, real life horror unassisted by monsters, and well-written and acted characters. No Man's Land is too quiet to be a contender for the list of best Big Finish audios, but it's a solid historical in every way. There's definitely room for stuff like this in the line. 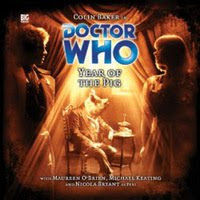 Year of the Pig, a 6th Doctor and Peri adventure by Matthew Sweet is a lovely, offbeat and literate story about zanies converging on a pig-man, or perhaps a man-pig. The text is wonderfully written and the plot full of surprises. The regulars are as usual excellent, and this time helped by a great guest cast that includes other Doctor Who actors, including Maureen O'Brien (best known as Vicki) and Adjoa Andoh (who soon became Martha's mum). Strange and unusual, it stands out among the rather typical sf and historical mix that came out of Big Finish just prior to it. 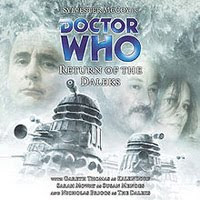 Return of the Daleks is a short, one-hour play that acts as a sort of untold chapter of the excellent Dalek Empire series (technically between episodes 1 and 2). The characters from that series return and meet the 7th Doctor (traveling alone), and we the audience return to a planet that's been featured in a tv episode (won't spoil it). Though it works if you haven't heard Dalek Empire, you'll be wondering what all that Angel of Mercy stuff is about and why the Doctor doesn't feature in the story more prominently. If you're a fan of Dalek Empire, don't worry, the Doctor doesn't undo anything Susan Mendes or Kalendorf did, or somehow reduce their contribution to the Dalek-fighting effort. More than fluff, but less than a full audio experience. Do yourself a favor and listen to Dalek Empire first (I and II for sure).

New Unauthorized Doctor Who CCG cards: Been a while, right? That's because I've been working on a possible 2nd edition. I do plan on finishing Reality Unbound and then come out with an All Good Things-type set to finish 1st ed. properly, but lately, it's been all about consulting players on how to streamline and improve the game, while also keeping everything backwards-compatible for hardcore 1st ed. fans. The bulk of the discussion is taking place at braxiatel.com.