What If... Captain Marvel Had Not Died? 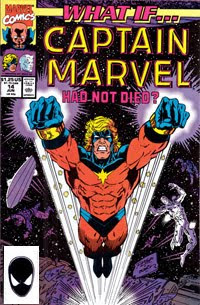 S.C. Ringgenberg's Mar-Vell What If? doesn't quite play fair with the reader. As you'll see, it's not so much a turning point as an additional plot point. There's a difference between postulating that Captain Marvel would have survived his cancer, and the out-of-nowhere idea that this would have caused a cosmic plague. The best What Ifs? are those that seem to progress logically from their turning point. This isn't that.

What If vol.2 #14 (June 1990)
Based on: The Death of Captain Marvel GN
The true history: Exposed to experimental nerve gas, Captain Marvel years later developed a cancer which proved fatal.
Turning point: What if Captain Marvel thought to get a check-up years earlier?
Story type: Momentary difference with side-orders of Slayer and Hockey Trade
Watcher's mood: Awkward voguing

Altered history: Mar-Vell detects his cancer years earlier, and immediately tells Rick Jones to make sure he's ok. No, it's not because he thinks cancer is a VD, but rather because of their symbiotic relationship. One check-up from the medical über medical team of Reed Richards, Don Blake and Dr. Strange, and Rick is given a clean bill of health. They then devise a treatment for Mar-Vell that takes his super-metabolism into account, bringing him to a timeless magical dimension, shooting him up with lasers, and guiding his mind into fighting off the illness. 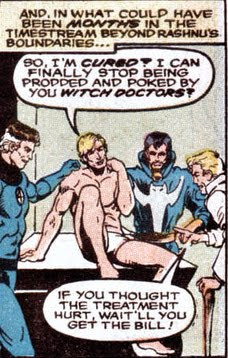 Yes, the Marvel Universe has a cure for cancer, but it costs something like 10 jillion dollars. Mar-Vell returns to his life on Titan, but feels he shouldn't waste his new lease on life. He decides to end the Kree-Skrull War once and for all, using the immense power of the Omni-Wave to force a treaty. Back on Earth, the Silver Surfer, still trying to break Galactus' barrier at this point in his life, feels something is wrong. He visits Reed Richards and discovers that Mar-Vell's cure has unleashed a contagious and virulent cancer super-plague.

The Surfer vows to bring Mar-Vell back to Earth to help find a cure and Thor smuggles him off Earth via Asgard. He finds that the Eternals of Titan, as well as the Kree and Skrull Empires have all been infected. The Surfer eventually finds Mar-Vell and this being a Marvel comic, they fight. Eventually, Mar-Vell hears the truth and the cosmic awareness kicks in. 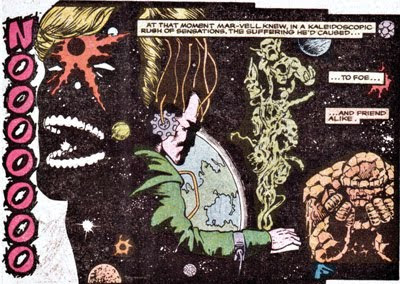 To add injury to insult, back on Earth, Ben Grimm has died. And to add insult to THAT injury, Reed Richards figures out how to cure the plague without Mar-Vell's help (something about using Rick Jones' anti-bodies cuz he hasn't succumbed). In short order, they've also found cures for other affected races, but Mar-Vell realizes his mutated plague-DNA cannot be allowed to remain in our universe. Dr. Strange takes him and his girlfriend to that timeless, empty place for the rest of eternity. 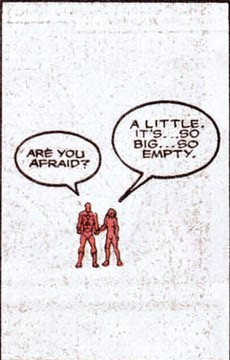 Epilogues... The Silver Surfer was given his freedom by Galactus, much like it happened in our world. The Kree's Supreme Intelligence kinda melted, bringing prosperity to the universe. Luke Cage took the Thing's place in the Fantastic Four. 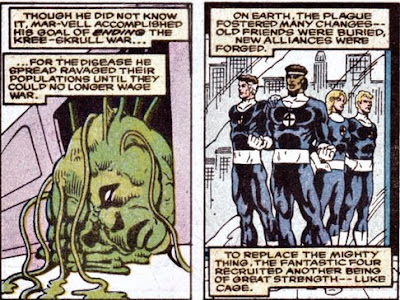 And least believable of all, Rick Jones used his experiences to become a rocking unplugged music sensation.
Books canceled as a result: Captain Marvel's book would have ended soon enough anyway, but the death of Ben Grimm would have killed Marvel Two-in-One and the 80s Thing series it became.
These things happen: While Mar-Vell appeared to have been found alive in the Negative Zone recently, that turned out to be a Skrull impostor. Mar-Vell has been seen even more recently as a member of the Dead Avengers, but while the events of the Chaos War could be used to bring him back, there is no indication yet that he will.

Next week: What if the Fantastic Four had lost the trial of Galactus?
My guess: As a universe bitterly complains, Galactus gets into celebrity golf.
Comics What If?

Shlomo Ben Hungstien said…
alright i've been waiting for this review that i'm glad to see since i used to have this issue. initially it was something of a feel good story with CM getting cured but then . . .well ya know.
January 23, 2011 at 3:32 AM

Anonymous said…
This could've and should've been the best "what if?" comic ever simply because its a character that really shouldn't have been killed off in the first place and is subject matter that fans 30 years later still clamor for. With the exception of a great "what if?" idea and a nice Ron Lim cover, the inside is a slopfest cover start to finish. Almost as if it was purposely done so, or rushed, in other words, it really disappoints almost as though editorial wanted to kill their "marvel's superman" for all tents and purposes EVEN in the "what if" world. Yet this topic still has hardcore fans as well has inspired a new generation of fans (case in point would be the spike in sales of his appearances) Like I said, good to have for the cover art and that they did this, but its a copout because he doesn't really get to live anyways (just jettisoned off to another dimension with his girlfriend never to be seen again). However the cover art by Ron Lim is proof that Mar-Vell was still influencing tv characters well past his apparent death. Case in point: Take a picture of "this" Captain Marvel cover and look at Captain Planet video art. I couldn't make this stuff up, folks. lol. Oh, and the funny thing about the cancer he got in Captain Marvel #34 (during Starlin's original run) was actually cured by Dr. Pym in Captain Marvel #35, but nobody ever acknowledges it. Ah, continuity. Don't ya just loooove it?
March 26, 2014 at 1:13 PM

Anonymous said…
Yep, the Captain Marvel #35 comment is absolutely true (and not a bad read btw). He is cured in it by Dr. Henry Pym (Ant-Man/Giant Man/Yellowjacket), and plus the guy is pink Kree anyways, hes an alien killing some of cancer is serious topic, no doubt about it, but for that story to have impact wouldn't it make sense to have that character from Earth? lol...Great idea for a "what if?" comic, but poor execution. Marvel really drops the ball here on what should be their superman
March 26, 2014 at 1:21 PM

Siskoid said…
The second series of What If wasn't usually too good. 90s, eh.