What If... the Fantastic Four Lost the Trial of Galactus? 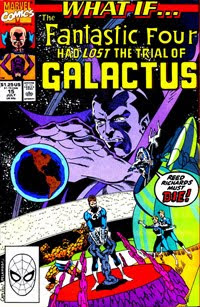 Or rather "What if the Trial of Galactus Had Ended in Reed Richards' Execution?" Coming up coincidentally around the time the FF have lost a member. I do say LOST because in no way does FF writer Hickman indicate that said member was killed. Only Marvel's press releases ever intimated such a thing. Not that it would have mattered, not in a world where you can come back from being shot by a sniper in broad daylight. This time, did you see a body? I sure didn't. And as blog buddy Bully went through great pains to show, it's not like it's the first time. And though What If stories didn't really "happen", here's another:

What If vol.2 #15 (July 1990)
Based on: Fantastic Four #262
The true history: Brought to trial by the Shi'ar for having spared Galactus' life, Reed Richards was cleared when Galactus showed up as a witness and summoned Eternity to reveal that the Hungry One had a pivotal role to play in the universe's destiny.
Turning point: What if Galactus did not appear at Reed Richards' trial?
Story type: Team Slayer
Watcher's mood: Torn

Altered history: When Galactus fails to show, Reed is found guilty. This one's for you, Bully: 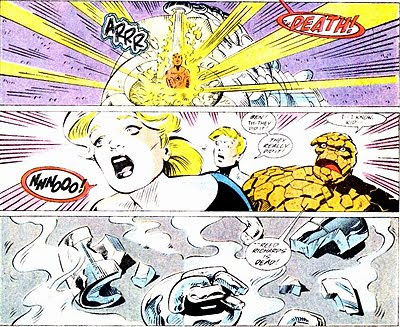 And in case you missed it, here it is again a few pages later: 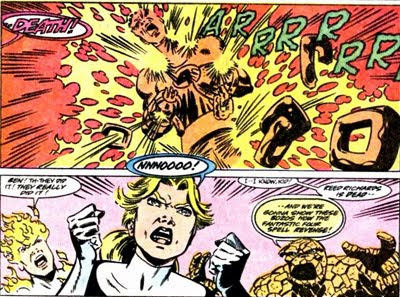 Got it now? Reed Richards is D-E-A-D, DEAD! Distraught, Sue Richards convinces the Torch and the Thing to get revenge. They load an impounded Skrull saucer with confiscated weapons from all of the FF's greatest villains and fly off to the Shi'ar throneworld. What they didn't count on was Annihilus' rod doing so much damage: 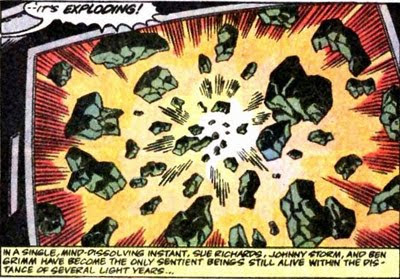 Who needs the Dark Phoenix? The Shi'ar planet and race and genocided but good and the FF return to Earth ashamed and knowing they have invited retaliation. In fact, Gladiator of the Imperial Guard is the lone survivor of the destroyed planet and he assembles an armada composed of every single alien race ever seen to wipe the Earth right off the face of the Marvel Universe. 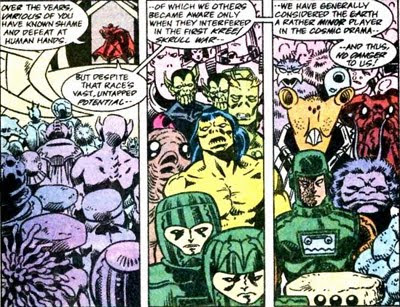 However, the Skrulls decide that, having suffered the most when they lost their homeworld to Galactus, they should use the stolen Omni-Wave to destroy the assembled alien fleet and then Earth, making them the greatest military power in the galaxy. On Earth, the Avengers and SHIELD prepare to defend their home when the FF take off to head off the fleet at the pass. Maybe they can reason with it. They first hit upon the Skrulls hiding on Mars' moon Phobos, realize what's about to happen and attack, giving their lives to stop the Skrull stratagem. This is all detected by the alien fleet and Gladiator decides that justice served. Here's another one for Bully: 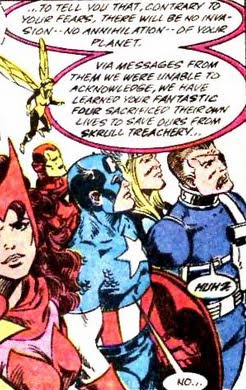 Earth is spared, hooray!
Books canceled as a result: Only the Fantastic Four. Unless Spider-Man, Ghost Rider, etc. want to get together again (for the first time).
These things happen: They keep killing members of the FF and they keep coming back!

Next week: What if Wolverine Battled Conan the Barbarian?
My guess: Business as usual at 1990s Marvel, right?
Comics Fantastic Four What If?

Kandou Erik said…
Pardon me, but is that Dracula on the cover of that issue?! What's Dracula doing placing judgment on Reed?

Speaking of Reed dying, when trying to figure out who was going to be killed in the recent FF story - I recalled how Reed had been dead for awhile already near the end of FF Vol 1.
January 29, 2011 at 1:56 PM

Siskoid said…
They've all been dead at least once in standard continuity.

And yeah, that is a TERRIBLE cover. Gladiator with his malformed hand awkwardly juxtaposed on the Shi'ar court. The crowd so far away, they might as well be an ugly strip of wallpaper. Lilandra standing inside a cannon, dislocating her torso as if Liefeld had drawn her. Johnny about to choke Sue. Capullo has certainly done better work than this.
January 29, 2011 at 2:04 PM

Anonymous said…
I know I'm just nitpicking but this issue is not based on Fantastic Four #244. That one is where Reed Richards spares Galactus Life. #262 is where the trials actually takes place.
January 29, 2011 at 2:09 PM

Will said…
I always thought that Galactus as a force of nature is just bullshit. Tornadoes, earthquakes, etc are not sentient beings. Galactus is just a murderer, he could choose to find some kind of alternative to live on or maybe kill himself before murdering trillions by this point.

That Galactus in some way helps weed out lesser beings is just vile social dawarinist evil.
January 29, 2011 at 8:02 PM

Siskoid said…
IF that is indeed his role in the destiny of the universe.

Do you accept Reed's refusal to take Galactus' life or does he share responsibility in the destruction of the Skrull homeworld and other planets that have fallen to the great hunger?

I of course agree that Galactus is a great evil, but I don't think his alien morality allows him to see it that way. And though what he does is evil, he himself may be nothing more than a weak junkie.
January 29, 2011 at 10:32 PM

Will said…
does he share responsibility in the destruction of the Skrull homeworld and other planets that have fallen to the great hunger?

Being alien doesn't absolve him of anything. Destiny that it should be someone's destiny to take him out. If cows and chickens ever develop a defense against us would that be wrong, be against their role in the universe ?

Galactus must be bought to justice.

Also there should a sequel called "The Civil Trial of Reed Richards" where the survivors of Galactus' attack sue Reed right into the poorhouse
January 29, 2011 at 11:35 PM