What If... Professor X Had Become the Juggernaut? 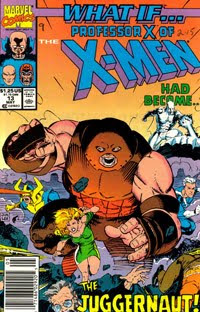 A well-known What If-type story in the X-Men canon is "Days of Future Past" in which anti-mutant legislation leads to a completely dystopic future/puppy mill for Liefeld characters. In What If?#13, we visit another dystopic future, this one based on the opposite notion. What if the mutants ruled? Speaking of mutants that rule: There is an uncharacteristic lack of Wolverine in this story. No explanation forthcoming.

What If vol.2 #13 (May 1990)
Based on: Uncanny X-Men #12
The true history: When Charles Xavier and his stepbrother Cain Marko were stationed in Korea, Marko found the temple of Cyttorak. When he grabbed hold of the Gem of Cyttorak, he gained the unstoppable power of the Juggernaut and caused a cave-in. Leaving him for dead, Xavier went on to found a school for mutants. Juggernaut eventually dug himself and came back for revenge.
Turning point: What if Charles Xavier stopped his stepbrother from touching the Gem of Cyttorak?
Story type: New World Order
Watcher's mood: Obsessed with Sims 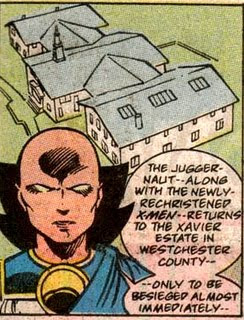 Altered history: Only accidentally does Charles Xavier brush against the Gem of Cyttorak, but it's enough to turn him into the Juggernaut and collapse the cave. Cain Marko escapes, but with hate in his heart for the stepbrother who ruined his chance at great power. Xavier's school for gifted youngsters is never created in this reality, so when Magneto attacks for the first time, it's the Fantastic Four who come to the rescue. No pro-mutant sentiment is generated to balance the anti-mutant movement growing in the wake of Magneto's big speeches. As mutants all over the world get hunted, Magneto declares Santo Marco a sanctuary. 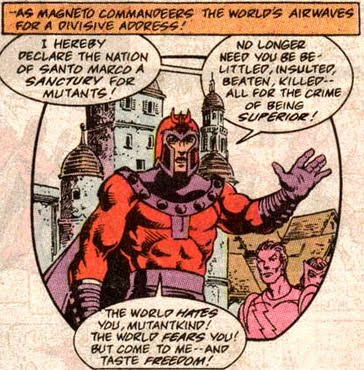 The original X-Men we used to know run to Santo Marco, as do much younger versions of Colossus and Nightcrawler, among others. Magneto soon molds them into an army and attacks humanity, but he hasn't trained them as well as Professor X would have. Iceman bites it. 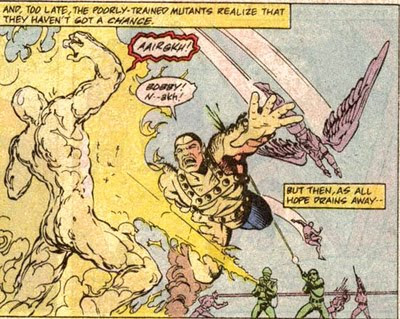 That's when the Juggernaut finally comes out of his mountain, beats on the army, walks into the U.N. and declares that mutants are all under his protection. He then stops Magneto and crushes his anti-telepathy helmet, followed by a host of Sentinels. Nothing can stop him. The Fantastic Four try, but Xavier telepathically links to the greatest scientific minds on Earth and creates a cure to their cosmic powers. Daredevil and the Hulk will also succumb to the depowering gas, while Spider-Man will simply find himself on the wrong end of a threat against Aunt May's life. He telepathically precipitates Tony Stark's alcohol problem, shrinks Ant-Man and the Wasp down to the Microverse, puts Captain America back into a block of ice and even makes a point of defeating Dr. Doom. Namor and Thor are away on other matters, but apparently, never return to shake up the new status quo. The dismantling of the Marvel Universe causes us humans to panic, so we start World War III. 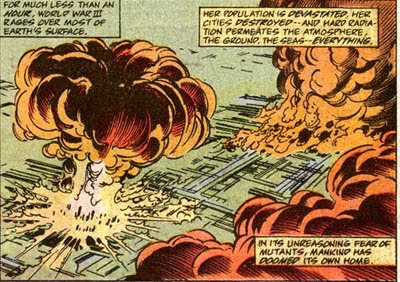 Your stupid minds! Stupid! Stupid! Don't you know radiation begets more mutants? When the dust clears, Juggernaut has come out of top and clearly half of the world's population are mutants. Earth becomes a mutant police state, where humans are routinely terrorized by mutant gangs immune to the law. In this brave new world, Cyclops and Jean Gray are married and have kids (whom the Blob's eldest daughter babysits). Scott is having doubts about this whole deal though. And I don't mean the helmet. 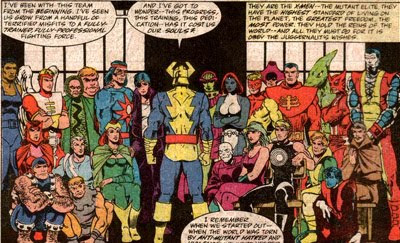 This causes a schism between the mutants, which Xavier gets wind of. He exiles Cyclops and his followers (Jean, Scarlet Witch, Quicksilver and Colossus) who soon meet up with Cain Marko. Marko is using Magneto's anti-telepathy technology to cloak himself and the X-Men from Xavier's probing and he brings them to Magneto's secret base on a metal asteroid in low orbit. They attack the X-compound, allow Colossus to be captured and probed, and lure the Juggernaut to Asteroid M. Their ploy works, and they manage to send the mad Juggernaut careening in space... forever. 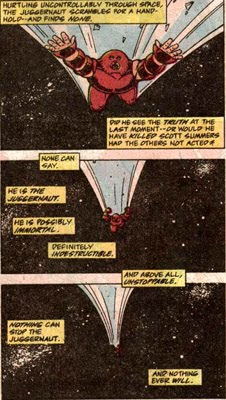 And so it is that Cyclops' X-Men vow to share the world with humanity, knowing they will have to fight Magneto tooth and nail so that he doesn't just fill the vacuum left by Xavier.
Books canceled as a result: Though Namor and Thor could conceivably hold on to "barbarian"-type comics, never visiting Mutant Earth, it looks like the whole Marvel line has to collapse. A new X-Men book would come out of these events, but would one really have been published during the intervening years? Juggernaut's fascist regime didn't really spawn heroics.
These things happen: I'm surprised more people weren't - at least temporarily - Juggernauted over the years. There's Rogue, and the "Exemplars" and that kid. Certainly, Professor X never got his hands on any Cyttorak power.

Next week: What if Captain Marvel Had Not Died?
My guess: Annihilation: Remission
Comics What If? X-Men