What If... the X-Men Had Stayed in Asgard? 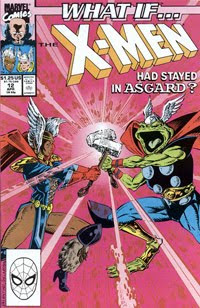 The problem with What Iffing recent storylines is that years later, you might not have any idea what those storylines were. Such is the case with the X-Men in Asgard story (and I have some of the original comics!). I expect a similar reaction to What If Dark Reign in 20 years. Jim Valentino does a good job with it anyway, avoiding the "Marvel Universe would collapse in on itself" trope and writing it like an actual shake-up of the X-books. An unlikely shake-up, but nonetheless possible, especially where the late 80s X-books were concerned.

What If vol.2 #12 (April 1990)
Based on: New Mutants Special Edition #1
The true history: When Loki abducted the New Mutants, the X-Men went to Asgard to rescue them without a return ticket. In Asgard, some mutants found happiness (Wolfsbane fell in love with a wolf-boy, Mirage became a Valkyrie, Rogue could touch people, and Storm gets her powers back) while others did not (Magma was turned into some kind of elfish creature). At the end of the story, Loki gave them an ultimatum. They could stay or leave, but if one of them chose to stay, they all had to. Wolfsbane had it the hardest, but did the right thing and they all returned to Midgard.
Turning point: What if Wolfsbane couldn't leave her boyfriend?
Story type: Hockey trade/New World Order
Watcher's mood: Bill-bored

Altered history: When Wolfsbane chooses to stay, the mutants put it to a vote, trying to make her change her mind. Half of them want to stay, half to leave, so Loki decides to be lenient in order to suck up to Those Who Sit Above in Shadow. All those who said they'd stay, had to stay. Those who wanted to leave were sent home. There, instead of splitting up into X-Men, New Mutants and X-Factor, they combined into a new iteration of the X-Men. 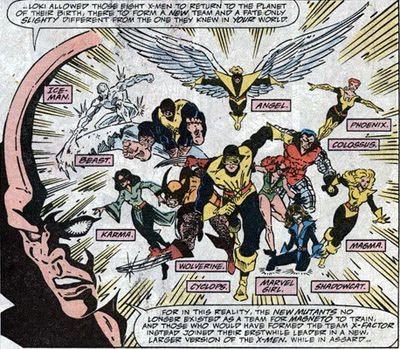 The rest settled down in Asgard. 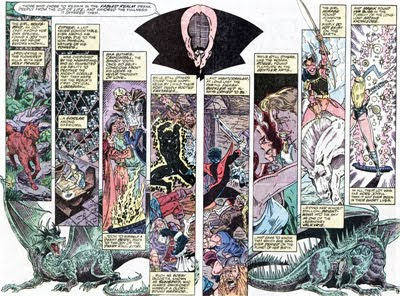 Let's see, we've got: Wolfsbane frolicking with her wolf-boy. Cipher becoming the official librarian. Cannonball marrying a dwarf princess. Sunspot and Nightcrawler each following a hero's destiny. Rogue is romanced by Fandrall. Mirage continues on as a Valkyrie. Magik becomes the new Enchantress. And in Thor's absence (he's been turned into a frog at this point), Storm serves as the new Goddess of Thunder. There's a further complication. Odin is dead at this point, and Asgardians are called to the Althing, a big gladiatorial fight to see who's to become the new ruler. Loki enters Storm into the contest, hoping to manipulate her no doubt, which precipitates an attack by the Norn Queen Karnilla's forces who wanted it to be her lover, Balder the Brave. Karnilla allies herself with Hela who wants Storm's soul anyway for having denied her Wolverine's. In the battle that ensues, which includes Throg by the way, Hela tries to kill Storm, but Sunspot bites it instead. 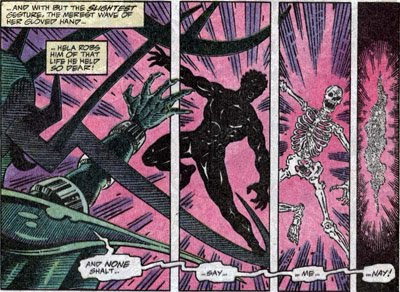 By Volstagg's actions, Thor is returned to Asgardian form, but by then, there are five armies bearing down on them all. The Norn's, Loki's giants, Hela's undead, Cannonball's dwarfs, and Wolfbane's wolves. A battle ensues, but peace is in part ensured when Balder promises to marry the Norn Queen, breaking her attack on the new Enchantress. But there are casualties. The dwarf king and Wolfsbane's boyfriend are killed. That'll teach him to affect the proper course of events! 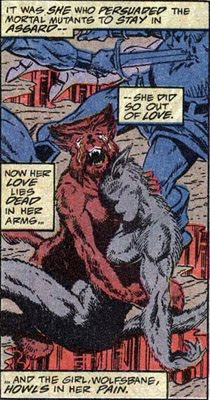 Hela, for her part, is destroyed by the Valkyries who claim her soul for Valhalla. 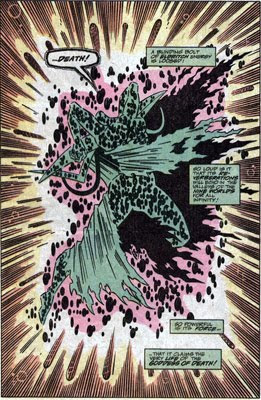 But who is to become the new guardian of the underworld? Well, here are the final fates of everyone: 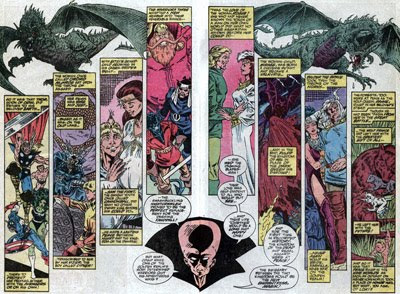 Thor nominates Storm for ruler of Asgard while he continues to split his time between Asgard and Earth and Balder is out of play because he's Norn King now. Storm brings on a golden age with Cipher as her vizier. Cannonball becomes king of the dwarfs bringing a new age of peace between his people and the Asgardians. He starts having children, no word as to their height. Nightcrawler replaces Fandrall in the Warriors Three, because Fandrall gets married to Rogue. Hey, better than Gambit. Mirage becomes the new Hela, again ushering in a new age of peace with the other eight worlds. And Wolfsbane has a litter of pups (sheesh, wasn't she, like, 13? Or is that dog years?) And so Asgard was taken over by peacenik mortal mutants. As for Loki, Those Who Sit in Above Shadow reward him by giving him absolute rule over the universe... in the far future when there's nothing but entropy going on. Haha.
Books canceled as a result: In the short term, New Mutants and X-Factor are gone, but I wouldn't be surprised if an X-flheim book popped up in their stead. In the long term, all these heroes would no doubt have returned to Midgard to multiply the X-books through the 90s.
These things happen: X-Factor would eventually be reintegrated into the X-Men, just as some New Mutants would graduate to the adult team. As for the Asgard stuff, not really.

Next week: What if Professor X Had Become the Juggernaut?
My guess: No one can stop him from THINKING!
Comics Thor What If? X-Men

Anonymous said…
This comic introduced me to most of the Asgardians, several New Mutants, and the almighty Thunder Frog. Jim Valentino went to town on this issue. Between paring the cast down to a reasonable number, deciding who would stay and what would happen to them, fitting in the occasional panel or two of characterization in a What If....? with such a huge cast, and drawing the book, my hat is off to him.

What's remarkable about this issue and the next ("...THINKING!" made me laugh) is the near complete lack of Wolverine.

Anonymous said…
I'm kind of baffled that the X-Men in Asgard stuff isn't in print? An Amazon search reveals only some out of print stuff. There's a Thor movie coming out next summer, it's got the x-men, it's practically begging for a re-release.
January 9, 2011 at 2:24 AM

Anonymous said…
Valentino What Ifs were real good and completejob, and that was one of my favourites.

The FiveArmies battle... I'm the only one to get the Hobbit's reference?