April 01, 2011
This week, WikiLeaks declassifies the pie throwing scandal that hit Task Force X - AKA the Suicide Squad - in the late 80s. They said it was suicide, they never said you could get pied.

Profile: Head of Task Force X
Target value: 500 - the maximum
Accusations: The Wall immediately accuses Captain Boomerang because 1) he's a good thrower, 2) he's probably looking to get revenge for the Loa con she pulled on him recently, and 3) she hates his guts. He immediately gets pied (see below), deflecting guilt to another (unknown) party. If the "Mad Pieman" is a member of the mission team (and pies are only thrown when the team is at Belle Reve), we should look at who is currently in the team. That would be Captain Boomerang, Rick Flag (soon to go over the edge), Deadshot (also soon to go over the edge, though another guy with perfect aim), Nemesis, Vixen, Bronze Tiger, Shade the Changing Man, Nightshade, Duchess, and Black Orchid. It is still possible another Belle Reve inmate couldn't be responsible, someone who is soon to join like Punch, Jewelee, Dr. Light or Count Vertigo (the clownish Punch perhaps the most likely of those suspects). [Suicide Squad #21] 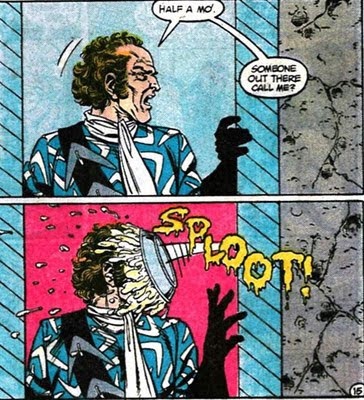 Profile: Member of Flash's Rogues Gallery
Target value: 10 or 125 (if he pied himself)
Accusations: Though this pie throw seems to prove his innocence, one should not forget that Boomer's gimmick is the boomerang. In other words, he's capable of throwing a pie that can return to hit him in the face. Note also that victims never catch sight of the Mad Pieman, suggesting a curve to his throws. [Suicide Squad #21] 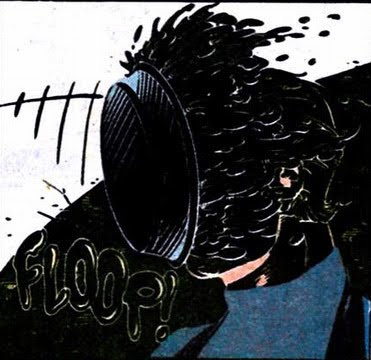 Profile: Man of mystery
Target value: 325
Accusations: Thrown under cover of the gene bomb explosion. One might infer that the thrower is not a metahuman or latent metahuman. [Suicide Squad #23] 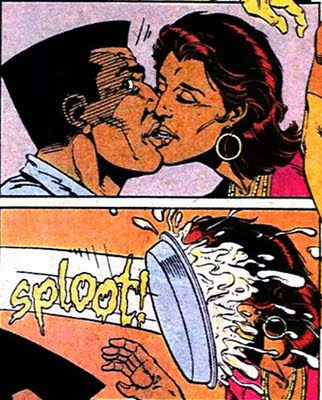 Profile: Former Justice League member
Target value: 300
Accusations: She leans into the Bronze Tiger for a kiss, he feels a pie coming and ducks. The Mad Pieman obviously tried to ruin a moment and perhaps hit two birds with one stone. This may indicate that he is loveless and so, jealous. [Suicide Squad #26] 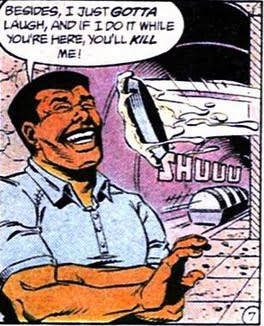 Profile: Martial arts master
Target value: 350
Accusations: While Bronze Tiger is laughing his ass off, he is hit by a second pie. The Mad Pieman has more than one at the ready despite his initial plan. This may indicate that he knows the Tiger's abilities and instincts quite well. At this point, a pattern starts to develop: Only heroes (or at least, non-criminals) get pied, which may mean the guilty party is a criminal. [Suicide Squad #26] 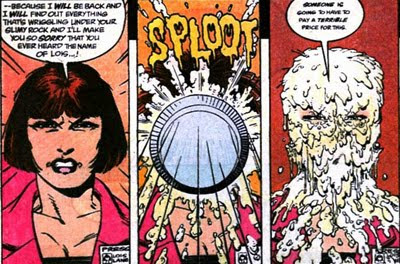 Profile: Superman supporting cast member
Target value: 400 (worth extra because unlikely to be at Belle Reve)
Accusations: Lois gets pied while trying to expose Task Force X. Of note is how head on Lois' pie arrives, again speaking to the curveball nature of these pie throws. [Suicide Squad #30] 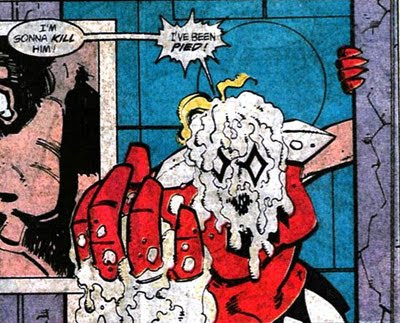 Profile: Obscure Charlton villain
Target value: 150
Accusations: Based on Punch & Jewelee's relationship, it's unlikely he would prank his lady love like that. However, Captain Boomerang makes her believe just that. True, or just deflecting attention from himself? Note that this is the first time a criminal other than Boomer is pied, and Boomer still profits from it. [Suicide Squad #31] 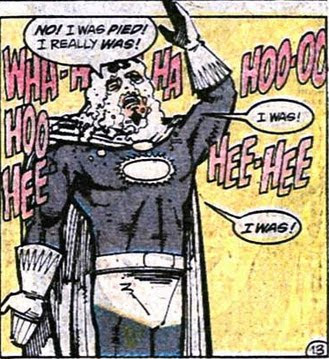 Profile: Lame Atom/Teen Titans villain
Target value: 0 (see below)
Accusations: It is quite clear that Light has pied himself to somehow feel "included". No one believes his deception. [Suicide Squad #31] 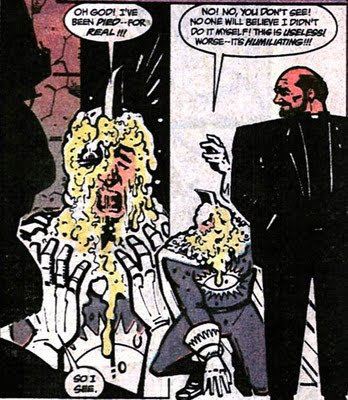 Profile: Lame Atom/Teen Titans villain
Target value: 50
Accusations: Light is pied for real and with no witnesses. The joke is that he still doesn't get the attention he craves. There's a high probability that the Mad Pieman was present at his first (false) pieing. This incriminates Major Victory, Duchess, Ravan, Punch, Jewelee (self-pieing) and of course, Boomer. [Suicide Squad #31] 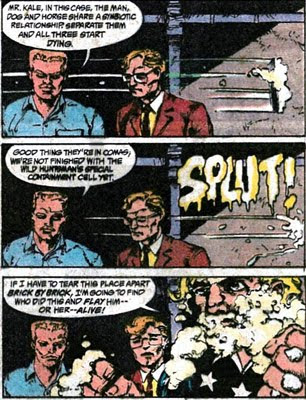 Profile: Marginal patriotic hero
Target value: 200
Accusations: It was only a matter of time before the blow-hard hero was going to get a pieful. By this point, other Belle Reve denizens consider this business as usual. [Suicide Squad #37]

And the Mad Pieman was... 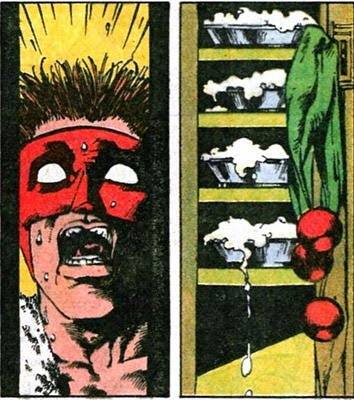 No, not Punch! As Murph correctly guesses, it's a frame-up. Punch's contention that custard is not his style aside, there's the fact (confirmed here) that Punch wasn't part of the team when the first pies were thrown. When everyone who was either absent from Belle Reve, or present in the room was removed from the list of suspects, NO ONE was left. From the accusatory information above, signs still pointed to Captain Boomerang. Security cameras catch him putting pies in Punch's locker. DEAD TO RIGHTS [Suicide Squad #37] 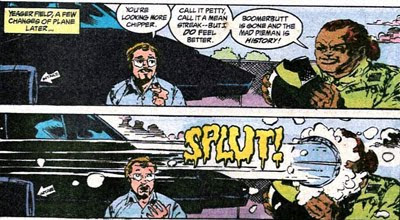 Profile: Head of Task Force X
Target value: 500
Accusations: Even after Captain Boomerang was left on a desert island as punishment, the pie throwing continued, albeit only for a short time. No mystery to the reader, Murph is seen with a pie, claiming to hold up the tradition. [Suicide Squad #37] 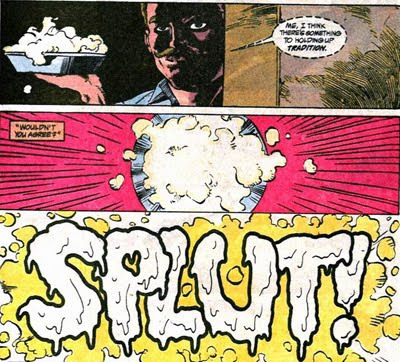 Shlomo Ben Hungstien said…
the part where Waller drops Boomerang on that deserted island still cracks me up till this day. but what was even funnier was how he tried to escape. it's like something Wiley Coyote would have come up with.
April 1, 2011 at 8:53 AM

Siskoid said…
We ARE talking about a guy who's first stories has him tie the Flash to a giant boomerang.
April 1, 2011 at 10:18 AM

Shlomo Ben Hungstien said…
yeah he did that also in an episode of the JLU called "Flash and substance". it's on Youtube. i take it your feeling better? ya know i found some art from Annihilators #2 including this sweet splash page of the fighting on Galador.
April 1, 2011 at 3:24 PM

Aliera said…
Captain Boomerang was always my first suspect.
You didn't include here that when Dr. Light first claimed being pied, Harkness was the first one to imediatelly say the lame villain was crazy and had pied himself.
And only afterwards he pointed the other's pie dirty fingers as proof.
He obviously knew he hadn't trow that one.
This was a very nice comic relief on that SS era.
This was a very interesting post although I think Boomeramg deserved mor vallue points, on pieing himself the way, and at the point he did :)
April 2, 2011 at 7:55 AM

Anonymous said…
Throwing a pie with a boomerang effect? Man, this is AWESOME. And that's revenging with style!

Ostrander managed to insert that funny scenes between his mortaly serious adventures without making it silly. That's what a great comic book writer does.

And Siskoid, if you write a letter to DC to ask for a Suicide Pie Thrower series, I'll sign it!

SallyP said…
This is simply magnificent, and it is something that should be brought BACK!