5 Sci-Fi Films to Drop the TARDIS Into

July 12, 2011
Consisting of five ideas for Doctor Who role-playing games (or simple daydreaming) taking very simple inspiration from the world of cinema.

Call it lazy scenario writing, or just a fun game to play in your head. But don't you sometimes fantasize about the TARDIS dropping into a favorite movie and the Doctor popping out to play with the completely wrong cast? Well, I do. Here then are five SF films that would work reasonably well as Doctor Who stories, with an attention to variety of era and style. Do you hear that wheezing, groaning sound? It looks like we're landing...

The Thing. Doctor Who has almost already done this in Seeds of Doom. A base under siege in the isolated Antarctic. A truly creepy alien monster that tries to take on people's identities. It's right up the Doctor's alley! Can the Thing mimic Time Lord DNA? And if so, with what results? At the very least, it's Kurt Russell's chance to guest-star on Doctor Who. Maybe there'll be survivors, this time. 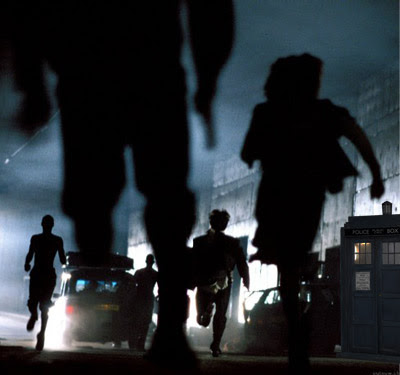 28 Days Later. Never mind that Christopher Eccleston stars in it, the rage zombie subgenre has yet to be done on Doctor Who. Empty London streets are a great setting for the world of tomorrow (in which Torchwood apparently screwed up) and then, well, RAGE ZOMBIES! The Doctor must race to find Patient Zero, and you know how he loves to run. And there's a LOT of running in this film. Also: The army gone bad. Totally Doctor Who. 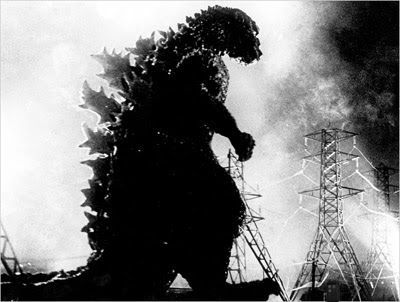 Gojira. The original Godzilla avoids the rubber-suited wrestler moves in favor of an allegory about Hiroshima, and I could very much see the Doctor and his companions offering help both to the victims (as Raymond Burr sorta kinda does in the American version) and to the Japanese government. This is a Godzilla movie where the monster is defeated (spoiler from 1954) thanks to anti-oxygen, so don't tell me the TARDIS doesn't fit the genre. I guess it's up to Ian Chesterton to put the diving gear on and blow Godzilla up. (If you're playing a Doctor Who RPG, don't tell me this doesn't light your radioactive fire.) 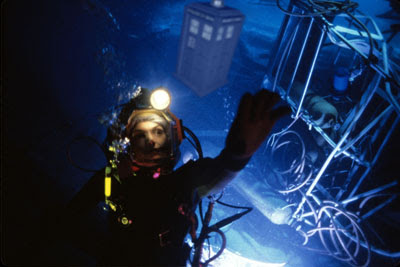 The Abyss. Take Warriors of the Deep and make it scientifically viable, make the aliens as ready to negotiate as the Doctor and give it a real sense of wonder. Michael Biehn is the real villain here. It's an alien world right here on Earth, and it all ends special edition-style with the Doctor and his friends trying to convince the aliens humanity deserves to survive. Gotta stop that giant tsunami before it's too late! 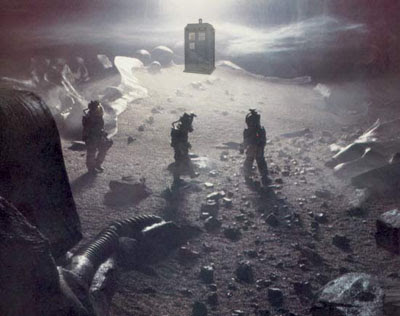 Alien. I realize all my choices were based on Earth, though I hope the environments have been unique. If I've got to go off-world, then I've got to hand it to the original Alien. You've got psychotic androids, face-huggers laying their alien eggs inside their victims, a monster the Doctor will probably think is "beautiful", and a high body count. The TARDIS materializes inside the Nostromo and immediately get captured by the crew, so it's the perfect story for him. Really, it's The Ark in Space in the dark. As it should have been (and perhaps might have if Ridley Scott had, as was for a time scheduled, done the art direction for it).

Set the time rotor for fun (well, by fun I seem to mean TERROR!) and I'll be back in a couple days for some historical destinations. In the meantime, any SF films YOU'D like the TARDIS to visit?
Doctor Who Inspiration Movies RPGs

smacky said…
I'd like to see the Doctor standing in the background with the other aliens in Ming's court during the "football" battle in the 1980 Flash Gordon!

googum said…
First one to leap to mind? Event Horizon. Although, that+Who probably equals "The Impossible Planet."
July 12, 2011 at 9:11 AM

Siskoid said…
Smacky: Yes that WOULD be awesome.

snell said…
This would be ridiculous, but the current TARDIS crew really should show up in Back To The Future, as the Doctor sets out to repair the damage "these bloody amateurs" are doing, Amy ends up taking Lorraine's place in a couple of scenes, and Rory teaches George McFly some real lessons about how to be a hero and win the girl...
July 12, 2011 at 10:09 AM

Bully said…
Beautiful idea and images. I'd like the Doctor to show up in Georges Méliès's A Trip to the Moon, from the reverse angle a la the second act of Noises Off. Since A Trip to the Moon is shot at 90 degree angles to the two-dimensional sets, we'd get a chance to see what really happened with the Doctor and Companions scurrying around behind the scenery ensuring the safety of the moon travellers. And the moon's poor eye.

Ameron said…
I assume you mean "28 Days Later" (the one about Zombies) and not "28 Day" (the one about Sandra Bullock going into rehab). Although, to be honest, having the TARDIS show up in a rehab centre could make for some wild and crazy adventures. "You saw what? Looks like Steve is back on the wagon."
July 12, 2011 at 11:47 AM

Siskoid said…
Hahaha. Thanks for the correction! But it's about time the Doctor got involved with real world problems.
July 12, 2011 at 11:51 AM

Jeff R. said…
Inserting the Doctor into movies that already have unexplained time-travel could also be fun, with very different tonal possibilities between "Groundhog Day" and "Run Lola Run". (At the very least, you get to have someone use the phrase 'chronic hysteresis' in those films that way.)

You could insert the doctor (I'm thinking the 7th here) into "The Fifth Element" and nobody would much notice, would they?

Also, a different Godzilla movie, Godzilla vs. King Ghidorah from the 90's. Did a review of that which can be summed up as follows: time travel doesn't work that way!
July 12, 2011 at 3:50 PM

Martin Léger said…
I'd see him in The Cube that would be pretty cool, maybe he would actually solve the mystery.
July 12, 2011 at 4:32 PM

Siskoid said…
Well, Doctor Who often does horror by way of SF. Straight horror, to me, uses supernatural explanations rather than scientific ones.
July 12, 2011 at 7:05 PM

SFF said…
This is great!

Event Horizon is a superb selection as well.

How about anything with dinosaurs like Jurassic Park. I know Pertwee had an episode like it, but can you imagine the special effects today?

We could drop him behind enemy lines like Band Of Brothers or a sci-fi alien invasion war flick like Battle: Los Angeles.

Maybe The Quick And The Dead or Tombstone. But I'm off focus here. Okay Cowboys And Aliens.

Predators could have been interesting.

I know you mentioned 28 Days Later, but Resident Evil with Milla. Yes!

Or we could have him get caught up with those Time Bandits.

Siskoid said…
Lots of great ideas SFF! Jurassic Park would definitely have worked with the Doctor in the mix, for example.

1. The Fifth Doctor and Nyssa wind up in the Vortex and mix it up with Zed and Zardoz. FYI, Burt Reynolds was originally supposed to play Zed, but got laid low by appendicitis, which led to Sean "Let's get me as far from 007 as possible" Connery prancing about the Irish countryside in his orange nappy and hip waders.

2. The Sixth Doctor and Peri take Brad and Janet's place in The Rocky Horror Picture Show. Just what kind of underwear does Six prefer, hmmm?
July 13, 2011 at 7:45 PM