August 09, 2011
We cut away to Gotham cemetery, where Black Lightning is undoubtedly in a Christmas mood, indulging in some teen angst he must've caught from one of his students. He's visiting the grave of Trina Shelton, whom he accidentally killed during a battle. Not only has this angst been going on since the start of the series, and caused him to initially lose his powers, but it was caused by an event that was never shown. Fast track to angst, Mike Barr-style. It doesn't need to have happened to long as we say it did. A lot. And often. 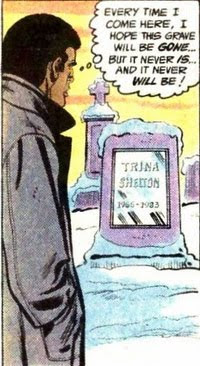 Is this how you atone, BL? By visiting her grave and hoping it disappears? Tricia Shelton is no Jason Todd, buddy. As BL ruminates on his very strange thoughts, he is being observed by Carmen Sandiego. 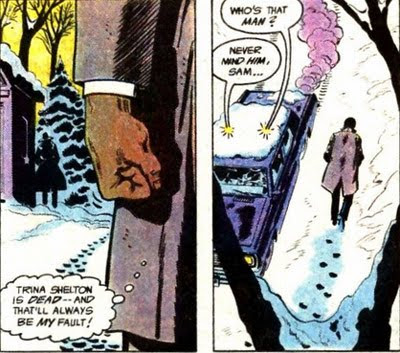 He leaves and crosses a car that will prove to be as ironic as city folk actually asking themselves who a passerby was is bizarre. Perpend... 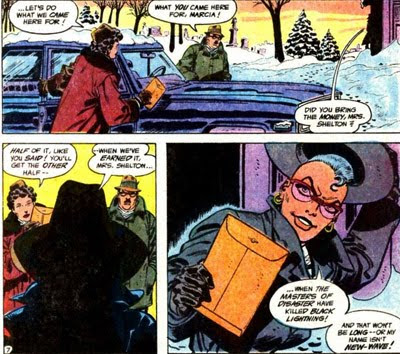 Trina's parents are taking out a hit on Black Lightning and Carmen Sandiego is the hitman! Or New-Wave from the Masters of Disaster, whichever. I don't know if law-abiding families often put contracts on superheroes' lives, or if it's a Gotham thing. I also don't know where the Masters of Disaster - a group that has yet to make its debut - are advertising that the Sheltons got their number. Nor do I know why a group called the "Masters of Disaster" are using their talents for assassination rather than wanton destruction. What I do know is that nothing says 1980s as well as a "punk hairdo". Meanwhile, at Gotham hospital (where the Outsiders seem to spend an inordinate amount of time)... 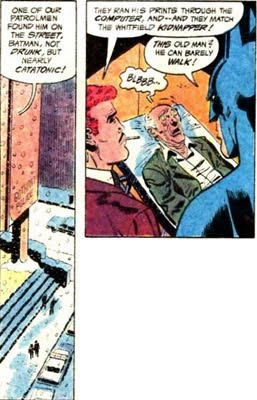 Freeman has called in Batman to discuss a catatonic old man whose prints match those of the babynapper. As we'll discover, Gotham civil servants are especially fingerprint-happy in this story, but I do commend them for picking up a homeless degenerate on the streets and bringing him to a hospital. Does he have insurance, I wonder. You know what bugs me about Barr's Batman? He's such a douche! 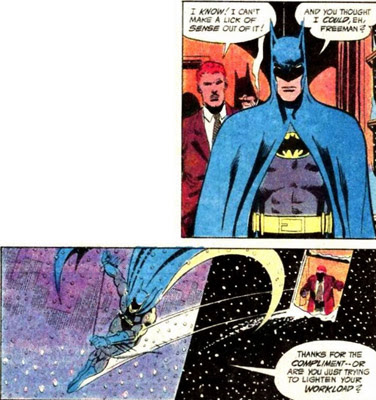 While I normally wouldn't mind Freeman getting slammed like that, I have to ask why Batman is so grumpy. Geez, Bats! Aren't you ON this case (stopping criminals "who would destroy families")? Isn't this an important piece of that puzzle? How is Freeman keeping you updated of the increasing mystery in any way objectionable. I bet if he hadn't called, you'd have slammed him for THAT. Sheesh. Freeman's only crime is not being Gordon. At least he already has an idea what it could mean (though as someone who's read the entire issue, I can tell you he only guesses through Adam West Super-Conclusion power). The Phantom Stranger appears to confirm it. 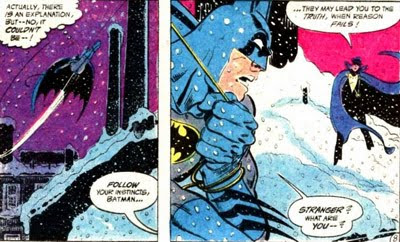 "Follow your instincts, Batman... Kick Geo-Force off the team while you still can." Like a burning bush, he leaves his message and then turns into a stove pipe chimney (I might be remembering the Moses story wrong). 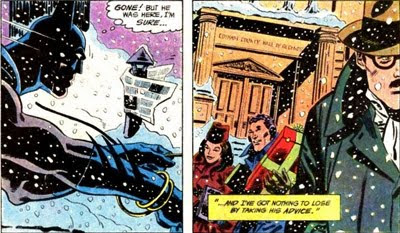 Batman swings to City Hall to check out some records. There he finds that little Timmy Whitfield's fingerprints match the old catatonic man's! Now, they don't actually take a baby's fingerprints at birth in the real world (only footprints), but this is Gotham City. You never know when they'll turn to a life of crime so might as well put them in the database early. And they're justified! I mean, Timmy just done and kidnapped HIMSELF and assaulting his mother! 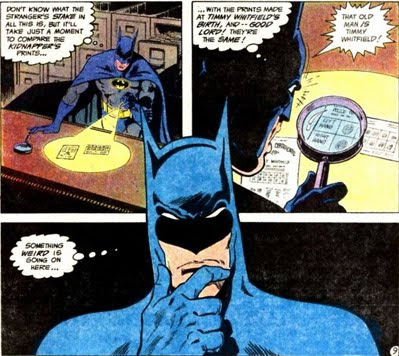 All of which forces Batman to realize that "Something weird is going on here." Oh, it only dawns on you now? It was all business as usual when you were hallucinating the Phantom Stranger?

Next time: The Outsiders call home for Christmas and Batman trips out!
Batman Comics Outsiders

Anonymous said…
I love your deconstructions of this less-than-classic 80s series! It's only to flex my own comic book geekery that I point out that Black Lightning's accidental killing of Trina Shelton actually WAS shown - it happened in DC Comics Presents #16.
August 10, 2011 at 2:42 PM

Austin Gorton said…
I also don't know where the Masters of Disaster - a group that has yet to make its debut - are advertising that the Sheltons got their number.

Seriously. I mean, I know it's Gotham, but still. Do you just put an ad in the yellow pages?

Freeman's only crime is not being Gordon.

Why isn't Freeman Gordon? I mean, it feels like on a TV show when the actor who played a character isn't available so they create an entirely new character to fill the same role.

But there's no reason Aparo couldn't just draw Gordon, is there?

Batman swings to City Hall to check out some records.

Aw, the good old days of breaking into a file room to look at physical records. Now Batman could have all that info with a few keystrokes or a call to Oracle.
August 19, 2011 at 5:26 PM

Siskoid said…
The previous issue does say Gordon is recovering from a stroke at this time. Barr's off the hook for that one.
August 19, 2011 at 5:30 PM

Austin Gorton said…
@Siskoid: Ah, I thought there was something I was forgetting.