Doctor Who RPG: The Retread Campaign 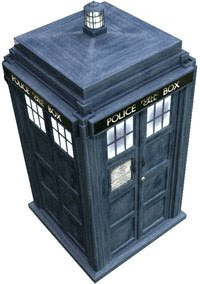 Being a Doctor Who campaign for DWAITAS or the system of your choice, for GameMasters who know their Classic Who and players who don't.
Recent announcements that IDW's Star Trek comics would retell the original episodes with the new cast/paradigm of the J.J. Abrams film - as retrograde and redundant as that might seem (looks like no one wants to do a real reboot anymore) - got me thinking about the idea's potential for the Doctor Who RPG. My players know the new series alright, but next to nothing about the original (though a few did borrow some DVDs to sample the various Doctors at one point). My guess is that while many GMs will be hardcore fans of the classic series (leading them to get the game and pushing to run it), the players they attract might only have sampled the new series. Perhaps I'm projecting my own experience on others here, but it fits the model of the GM collector that has to know everything about anything, and players who are content to let the GM do all the research. At times, I've found the gap between my knowledge and that of my players (not just in Doctor Who, but in the comics some of my superhero games were set in) a bit of an annoyance. But here's a campaign idea to at once make use of players' ignorance AND bring them closer to sharing your interest in the classic series. I call it the Retread (don't call it a Reboot!).

The premise
Basically, whether using their own Time Lord and Companions or the characters from the show, the players experience the same adventures the real TARDIS crew did, and in the same order. They'll get to know each other in 100,000 BC, then face the Daleks for the first time, do some weird stuff in the TARDIS and follow Marco Polo to Cathay. All you have to do is write up each adventure as plot points and define each character's stats. No doubt, the players will go in directions the show didn't, and in DWAITAS at least, the system is easy enough to improvise around the episode you're re-telling. The only thing you need to keep to make this work is an uncontrollable TARDIS so that the players can't set their own destinations. You can skip episodes you don't like, or can start with a different regeneration (trapped on Earth with UNIT? doing chores of Time Lords and Guardians?), it's up to you. If some of your players have cursory knowledge of the program's classic era, you might change some of the details (the James Bond 007 RPG's published scenarios do this very well, if you're looking for an example). Bottom line, you're using the classic series as a huge sourcebook and campaign tool.

Characters
If players use their own characters, it's sure to change the way the story unfolds. They could also use a mix of the show's characters and their own (say, the Doctor and completely new companions). Or a player with some knowledge of the show could opt to play Ian, even if the rest of the cast is different. Finally, and this may be the funnest of all, the GM could give the players a brief on who the PCs are: The Doctor, Ian a science teacher, Barabara a history teacher and the Doctor's teenage granddaughter Susan, and let the players re-invent them. The new Susan will be as related to the old as the Abrams Jim Kirk is related to Shatner's. Same character, different take.

Debriefing
Now, this is something I've had success with the aforementioned James Bond 007 RPG. Once you're done with an adventure, you can invite your group to watch the same adventure on DVD. How did they do compared to the original TARDIS crew? Where did they go in a different direction? Where were they (amazingly!) on the same page as Doctor Who's writers? Soon, you'll have players reenacting their own moments, heckling at the screen and either admiring or lampooning how the tv characters got out of their cliffhangers. Plus, you might just get those New Who fans to stop snubbing the classics!

But don't do too good a job... they'll get ahead of you and make your Retread campaign collapse! ;-)
Doctor Who Inspiration RPGs

Craig Oxbrow said…
Seems like a mad idea for a comic (especially at the issue prices IDW charges) but a fine idea for a game.

F. Douglas Wall said…
If your players are perhaps too familiar with the source material, you could always pull a "Trials and Tribble-ations", forcing them to work behind the scenes of a previous adventure to make sure it goes off without a hitch.
August 11, 2011 at 10:06 PM

Kit said…
Interesting. I've long been sorely tempted to run a DW game with the Cushing Doctor as the First Doctor. Taking something of a Marvel Comics "Ultimate" approach, I would retell old DW stories as I saw fit and reboot old foes in new ways.-Kit
August 16, 2011 at 4:15 AM

Cushing is an interesting Ultimatization too because he's not a Time Lord, just a nutty professor from present-day Earth. So right there, you've got an important deviation.
August 16, 2011 at 8:05 AM