August 30, 2011
As we say goodbye to the DC Universe As We Knew It this week, I thought it might be interesting to check out our poor, about-to-be-rebooted heroes' last words before Reality put the key in lock and the chairs on the tables, turned off the lights, and reopened with a new sign over the door (though not under new management). I'll be waiting for you at the end with a box of tissue or a stress ball, your choice.

Batman (Dick Grayson): "All that's left to do is hang our hats, belly up to the bar, and be ready for what comes next." (Detective Comics #881 by Scott Snyder)

Booster Gold: "This is so weird. Like the only thing I know for sure... is that I gotta get me a new suit." (Booster Gold #47 by Dan Jugens)

Gotham City Sirens: "Nothing prepares you for the end. All we can hope for... is after everything is over... and the darkness has claimed us... there will finally... be calm." (Catwoman in Gotham City Sirens #26 by Peter Calloway) 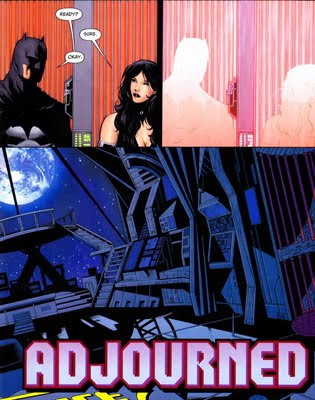 Power Girl: "Okay, boys. Let's go over this point-by-point and you tell me just exactly what the hell this was all about. And don't leave anything out. After all, we've got all the time in the world." (Power Girl #27 by Matthew Sturges)

Secret Six: "I couldn't sway, slow or stop them. So they went out the hard way." (The Huntress in Secret Six #36 by Gail Simone)

Superboy: "But now I know I'll never be normal. I was born in a test tube in a lab. I wear a costume and fight bad guys. And my friends aren't normal either. But maybe that just means I'm not so different after all. I'm Superboy, and this is Smallville... and there's nowhere I'd rather be." (Superboy #11 by Jeff Lemire)

Supergirl: "People like Supergirl, they have a way of sticking around. But you and me... just... don't forget me, okay?" (Supergirl #67 by Kelly Sue DeConnick)

Superman: "I married you Clark, but I dedicated my life to truth long before I met you. I'm not going to turn my back on that even if it does mean losing you." "And that's why you never will." (Lois Lane and Superman in Superman #714 by Chris Roberson)

Teen Titans: "Old. New. It doesn't matter. As long as there are Titans, we will have a tower. Titans together. Titans forever." (Red Robin in Teen Titans #100 by J.T. Krul) 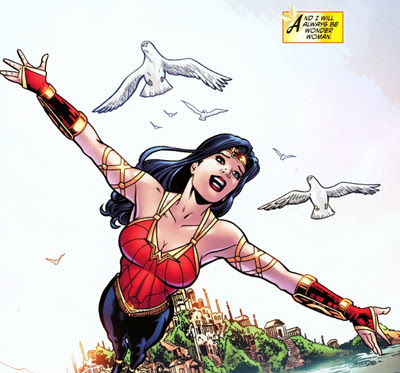 Pass me a stress ball. The execution of the end of the DCU was pretty rough, Batgirl being the worst example I saw with 7 splash pages and a mashed up ending.

Michael Hoskin said…
"As long as there are Titans, we will have a tower."

Moriarty said…
I think Hal was speaking for pretty much every long-time DC Comics reader.
August 30, 2011 at 1:04 PM

Craig Oxbrow said…
Pretty funny coming from Mr. Johns, whose books are all carrying on regardless.
August 30, 2011 at 3:22 PM

SallyP said…
Actually, the little "poot" sound effect with Batgirl just MADE it for me.

Siskoid said…
As huge UK television watcher, I've got most of the lingo down, but didn't know that one. I would have guessed right from the context, but thanks for the confirming translation. :)
September 1, 2011 at 7:27 AM