New DCU: Canada Gets a Boost 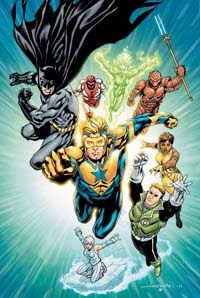 The recent announcement that Booster Gold will be rebooted as a Canadian in New 52's Justice League International has generated mixed feelings in me. On the one hand, it's about time the DCU got itself some Canadian heroes. I'd say Booster would join the Young All-Stars' Flying Fox, except that the character hasn't been seen SINCE Young All-Stars and has likely been erased from continuity. But while I want to be a proud Canuck here... Booster Gold? BOOSTER GOLD? If there ever was a more American concept for a superhero, I don't know what it is. A disgraced football star (with all due respect to the CFL, football is really more a part of American culture) from the future who started his career as a glam & glitz, corporate capitalist, celebrity hound. That's an American stereotype, not a Canadian one. Sure, Booster's come a long way since then, and I'd be proud to call him my countryman, but aside from saving some hockey players in the 5th issue of his original series, nothing about him ever sent out a Canadian vibe.

Of course, if I indulge in some honest national soul-searching, I have to admit that there are plenty of Canadians who fit his profile. The more socialist tendencies of my country are eroding away while Harper keeps an address on Sussex Drive, and American culture continues to filter through (filter! ha! like anything actually gets "filtered" at the border!). Canadian identity is a difficult thing to define, especially in opposition to American identity. I know it when I see it. I feel it. But I can't quite explain it. Canadians do come in all shapes, sizes, colors and creeds, and any member of the JLI could theoretically be given Canadian citizenship (while keeping their own culture, so Vixen, Rocket Red et. al count). I guess I'm responding to what's ICONIC about Canada and about superhero comics. And Booster Gold and Canada do not share any iconic traits.

So who COULD be retconned into a Canadian hero? Good question. If the idea was to make the JLI more international, then there are still two Americans on there. Guy Gardner might have been a candidate (does it strike you as right that all four Earth Lanterns are Americans?). His hard right politics might have pegged him as an Albertan Harper supporter. Too bad Ice is Norwegian, because her powers definitely lend themselves to Iconic Canada. If DC had been really crazy, they'd have put Metropolis on top of Toronto, the city that was used as its model, and made Superman an adopted Canadian (Saskatchewan is a better Kansas than Kansas).

Aquaman raised on the shores of Atlantic Canada? We've got PLENTY of lighthouses here. Our fauna might make it a nice home for Animal Man. Our native quirkiness might inspire heroes like Blue Devil, Aztek or the Heckler. Or if it's the politeness aspect you think is us, I notice they don't know where to put Fawcett City anymore. Doesn't the Marvel Family strike you as Canadian? Even a few villains to join lonesome Plastique would be nice. I'd take Crazy Quilt at this point (that's a sort of Canadian Mosaic joke).

I don't know who I'd import exactly, so I'll leave that up to you and the comments section.
Booster Gold Canada Comics JLA

Anonymous said…
How about John Stewart as a Canadian? As every Ohioan learns in school, runaway slaves had to sneak up to the Great Lakes (especially Lake Erie, it was closest) and row their way to Canada to be free. But that's the end of the story as we know it: whatever happened to those former slaves? I am assuming there are Canadians descended from slaves, and because they are Canadians and I don't know any better, I imagine they would be thoughtful, polite, and well-educated. That's the John Stewart I like best.

While I sometimes object to retconning history into characters' history, once in a while it seems like a harmless enough thing. For the record, I also like the retcon that Dick Grayson has Roma blood in him; there is no people that comics have treated worse than the Roma, and if there's anyone who could reverse the bad PR simply through a positive nature and general awesomeness, it's Dick Grayson. And he'd be another potential Canadian -- "traveling circus" would explain a lot -- so grant him dual citizenship.

They're pulling these out of a hat, aren't they?

You're absolutely right. There's no character more American than Booster, and untypically, he stands for a criticism of the USA as much as a celebration of it.

Michael Hoskin said…
Why not make Green Arrow a Canadian trying to spread his socialist upbringing to his southern neighbours? If you view Green Arrow as a hypocrite then good news: we have those in Canada too.

Since we have so few super heroes, why not give us a Flash? Then we'd have one hero who could police crime coast-to-coast with ease.
August 29, 2011 at 1:54 PM

Siskoid said…
Super-speed would indeed be useful for a Canadian hero (in fact, at least 4 members of Alpha Flight have either speed or teleportation as powers).
August 29, 2011 at 2:00 PM

Wayne Allen Sallee said…
Playing devil's advocate here, what's the 25th Century version of Canadian? Or did BG apply for citizenship after sneaking back here to the 21st century?
August 29, 2011 at 3:02 PM

Siskoid said…
Well, yes, we DON'T know how Canada evolves in the next 500 years, but if we're talking ICONIC, which is something comics do well, though DC seems to sometimes consider it a dirty word, then Booster has always been played as an American with an American personality and American concerns, interests and pursuits.

We can of course say that 25th century Canadians are just like Booster (although he's a bit of a misfit in his era), but isn't that cheating? 25th century Americans might be exactly like Germans or Chinese. But look at the Legion 1000 years from now. National identities are recognizable. Why? Because the readers need those touchstones unless they are explicitly part of the plot.

Hey, it's possible Booster was savagely rebooted, tossing away his time in Metropolis as the hero with a soul for sale, and that he used to be a hockey star in the future, if he even comes from the future. But it's not likely from what we know.
August 29, 2011 at 3:13 PM

snell said…
For what it's worth, Guy Gardner was an American college football star. That doesn't rule out his being from Canada, obviously, but it's just as much a strike against the idea as Booster's football career.
August 29, 2011 at 5:42 PM

Craig Oxbrow said…
Hmm. Not exactly Superhero Girl, is he?

Martin Gray said…
This is a most surprising announcement. Why not just reintroduce the Crimson Fox sisters as French Canadians?

And the ice skating Golden Glider could be revived as a protege of Brian Boitano!
August 29, 2011 at 6:14 PM

Siskoid said…
And then there are real world supervillains like the Harperbot and Céline Dion.
August 29, 2011 at 6:48 PM

Because the then you've got this one-note joke character cluttering up the DCU for however long it takes everybody to get tired of her AGAIN.
The only time Madamoselle Hepzibah was funny was as her original self, back when Walt Kelly was writing and drawing her.
[eek, I almost wrote "doing her" but that would be wrong.]
August 30, 2011 at 10:06 PM

Anonymous said…
Whoa, after watching some "Due South", I have to agree that there should be a Canadian Flash, and that Flash should be Jay Garrick. Compare the get-ups:

... And I suddenly realized that perhaps the entire JSA is Canadian. Besides having that old-school politeness in spades, it would allow the JSA to exist while not contradicting the new mandate that Superman was the first of heroes. First of AMERICAN heroes, maybe, which is a big enough "first" to satisfy the mandate.
September 11, 2011 at 4:02 AM

Siskoid said…
Must be!