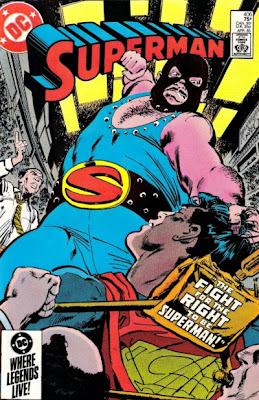 In the dying days of the Bronze Age, Paul Kupperberg and Irv Novick (under a cover by Ed Hannigan and Klaus Janson) revealed the existence of Moe Ramboe, a two-bit wrestler who had used the "Superman" name long before Kal-El ever stepped foot in Metropolis. When our boy from Krypton did, however, it meant the end of his career. No one wanted this lame "Superman" when a real one flew over our heads. But Moe is special. His dreams about sports events come true! 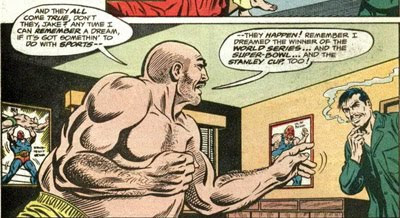 At the same time, Superman is doing Super things, like cleaning his suit by going through solar flares, preventing plane crashes and fighting crooks armed with tanks (oh Metropolis, never change!), but he's got trouble. His powers keep going in and out without explanation. And when Moe's crooked brother Jake organizes a fight between the Supermen for his mob bosses, he trusts Moe's premonition to come true. Indeed, Superman feels compelled to go to the warehouse where a wrestling ring awaits him. And again, there's no explanation. They fight, and Superman's powers give out entirely, allowing him to be pinned rather easily. 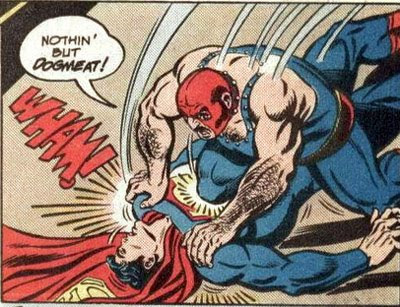 But he gets up, feeling refreshed, and Moe "Superman" Ramboe hits his head on Superman's chest - K.O.! And still there is no explanation. Well, there IS one. Kupperberg keeps talking about the "wheel turning".