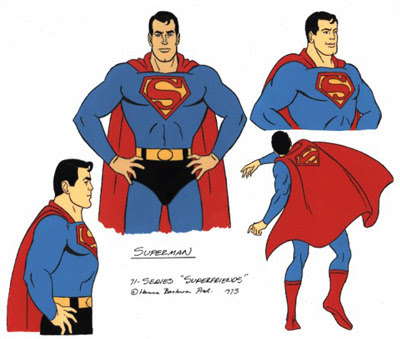 Through all the iterations of the Super-Friends cartoon, from the Marvin & Wendy days to those of Firestorm, Danny Dark was the voice of Superman. A booming, adult voice, instantly recognizable which hasn't been matched, in my opinion, by anyone. Even live action Supermen don't have "Superman's voice" as I understand it in my head. Almost everyone else sounds too young to me, and despite DC's recent contention that superheroes have to be young to be appealing, I have no trouble whatsoever engaging with a 40-year-old Superman. And it's not because I'm that age now, because I've been living with his 40-year-old's voice in my head for more than 30 years! Danny Dark is MY Superman in the way others might say Reeves or Reeve or Cain is theirs.

When reading Batman comics, I tend to hear his Super-Friends voice only in Silver Age material, and the 90s animated series' in more modern appearances. With Superman, it's always Danny Dark, no matter the era. "Great Scott!"

Compare Superman voices for yourself at Behind the Voice Actors.com

LiamKav said…
That's interesting. I definitely have a Batman-voice in my head, and it's Conrow. In fact, it's pretty much all the BTAS voice actors, so much so that when Gordon speaks with Tom Kane's voice (who I love as a voice actor) in Arkham Asylum, it completely breaks the game for me, far more than if everyone had different voices.

For Superman though, I don't have a voice. I'm too young for Superfriends. I suppose it's probably George Newbern, because I've seen more Justice League than STAS. I wonder if it's a harder role to do. Batman is more operatic than Superman, which lends itself to a more standout voice. Superman has to sound both commanding and like the friendliest person ever.
August 21, 2011 at 10:22 AM

LiamKav said…
I will once I get a chance to turn the sound up on my laptop without annoying the person sat next to me!
August 21, 2011 at 4:20 PM

The Superman voice I usually hear in my head is actually the first actor to give Superman a voice: Bud Collyer's. He's got the toughness necessary to be a badass Superman, but his mild-mannered* Clark carried the radio show most of the time, and did a great job as a protagonist too.

Failing that, I also have a thing for Tim Daly's Superman voice.

Gotta be honest, the only time I hear Danny Dark's voice for Superman is when I'm watching Super-Friends.