Reign of the Supermen #310: Supermen in Training 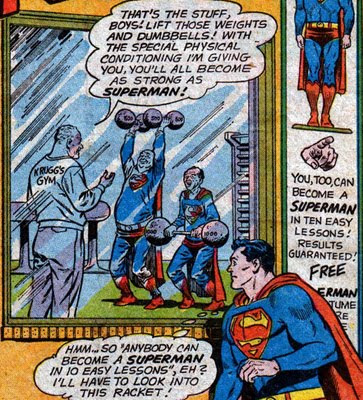 A bunch of middle-aged and older men in Superman costumes, accomplishing feats of super-strength? OUTrageous! But here's the truth of it...

It all starts when Jimmy Olsen sees an old man in the super-suit try to lift a bus and calls Superman. Supes soon arrives and the poor guy tells the story of Krugg's Gym, where an elixir gives you super-strength for an hour and only inside the gym. Why he thought he could lift a bus OUTSIDE the gym is uncertain, but the guy can't be very smart if he can't smell the obvious con. And at 300$ for 10 easy lessons, someone's making cash off the grift. So Superman puts on a fake mustache and shows up at Krugg's as Horace Mopple (Matches Malone, it ain't), pure weakling in search of a "hero of the beach" scheme. He immediately recognizes Krugg as "Soapy" Kryle with his Most Wanted Vision, a swindler wanted in the next state. To his super-senses, the con is obvious. The weights are hollowed-out cardboard, the punching bags are loose, etc. Clark has looking weak down to an art. 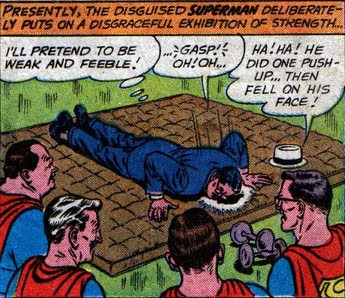 Before his first lesson can begin, a German professor rushes in with his improved elixir. Turns out Krugg is letting him believe his stuff works because he needs the steady stream of vitamin drinks, but plans to skip town before he has to pay him. While Superman has enough to arrest Kryle, this is the Silver Age, so he has to do it by hoaxing the hoaxer. HAS TO. He drinks from the elixir and then ruins a perfectly good suit. 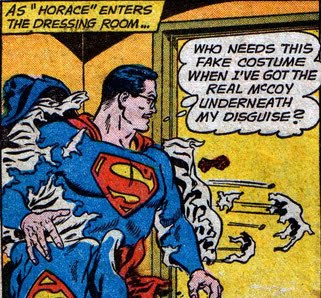 Next, he uses his real powers to make it seem like the elixir is so improved, it actually works. 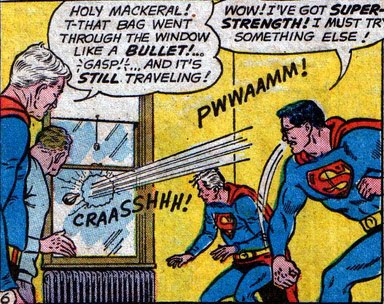 He also uses various powers to simulate Kryle's own powers after he drinks it to make sure Horace isn't a "rare glandular type". Kryle thinks he can now make a lot more money, so he runs to the professor's workshop to get more formula. Superman's beaten him to it and super-disguised himself as the professor after having super-explained the situation. 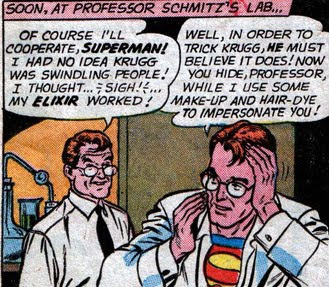 When Kryle arrives, he claims to have perfected the elixir even more and flies around to prove it. Kryle stands to make millions, so he happily pays the "professor" thousands with a check made out to money (enough to pay back all the marks he's conned). Kryle takes a big drink, and Superman makes him fly out the window with his super-breath. He blows him all the way across the state line and into the arms of waiting policemen.

Needless to say, he can't fly away again no matter how much he flaps his arms. Superman stifles a laugh. The end.

And now you know... the REST of the story.

snell said…
Ahh, Superman was just ticked that he wasn't getting royalties from the use of his trademark...
August 26, 2011 at 7:42 AM