Reign of the Supermen #312: Superman Squad 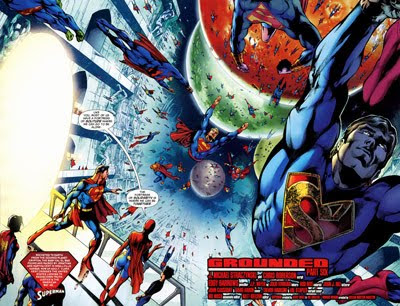 In All-Star Superman, which was supposed to be off-canon, Grant Morrison brought back the Superman Squad, a team of Supermen descended from or inspired by Superman from across all space and time who banded together to defend the time stream. You've seen a few members on this blog and you'll likely see a few more. When I say "supposed to be off-canon", it's because Morrison tied it into his DC 1,000,000 concept, linking it to the proper DC Universe (RIP 1986-2011). Did All-Star's events actually occur in standard continuity, or was the Squad inter-dimensional as well as pantemporal? Jump a few years to Chris Roberson's Grounded.

I have to say: Chris Roberson is my kind of insane. Not only does he bring back the Squad, but he builds on it to the point where it could have been a great spin-off in a non-rebooted world. And wait. Not only does he use the Squad, he reveals that the meeting in All-Star happened. A version of it? Certainly, they couldn't have come for Jonathan Kent's funeral since he was alive recently. Listening to Roberson speak on the War Rocket Ajax podcast this week, he seems to regard continuity through the lens of his own version of hypertime. He says we've been following the same character since Action Comics #1 because even in the Byrne era - which was a complete reboot - he remembers the Crisis - which the previous version experienced first hand. It's a timeline that keeps shifting (shades of my Continuity Bottle), but he doesn't always remember that unbroken history. Perhaps being in the "Still Zone" outside space and time helps him to remember his own parallel histories. Perhaps it's like remembering the Crisis.

One of Roberson's best ideas is that of the Fortress of Solidarity (great name), a place where the Supermen can go to hang out with each other. We meet a lot of new Men and Women of Tomorrow there, but I won't spoil them yet. I've got to think about the future of Reign! In the closing chapter of Grounded (and of Superman volume 1 - choke), we learn that Superman actually started the Squad, for surely, it's what the Supermen of America evolves into.

The Squad, as imagined by both writers, is the ultimate expression of the superheroic legacy, the concept that has driven the DC Universe unconsciously since the Silver Age and more overtly since the 80s. Though the Marvel Universe has spawned replacements, families and like-named heroes, it never really gave off the same vibe. Some of their heroes were part of legacies, but that wasn't what the MU was about. The DCU - at least as we knew it - was. They had a vast number of superheroes from the 40s who inspired or even mentored younger heroes right up to today. The most important and recognizable heroes had sidekicks who dared go out on their own as part of the Teen Titans or even their own series. Many of them replaced, at least for a time, their masters. And 1000 years in the future (and 850,000 years after that), new heroes took their inspiration from that same root. After Crisis, this became even clearer, with a third Flash taking to the streets and helping train a younger model, even as the Golden Age original was running beside him. And at the very end of this "Legacy era", we have multiple Batmen running around and a Squad of Supermen protecting space and time. We no long have to wait to follow in our master's footsteps, we can in fact earn the right to walk right next to him or her.

The pendulum swings. The Golden Age heroes return to their own Earth, and contemporary heroes find their inspiration elsewhere. Everyone will be younger, less experienced, LESS INSPIRING. The legacies are dead and those that survive are suspect. DC has decided that legacy equates with an insurmountable opacity - "How can new readers get caught up when the story started in 1938?" - and that it had gone as far as it could with the legacy idea.

Carl Walker said…
I imagine that DiDio's response would be to babble about how legacies aren't iconic, followed by some foaming at the mouth perhaps. If I was forced to reboot the DCU I would do it by letting the timeline progress at a normalish speed and letting every hero have a legacy, but at 30 I am a young comics reader (yikes) so what do I know?
August 28, 2011 at 2:36 PM

Siskoid said…
Since comics continue to require a deep wallet, you're about as young as most young comics readers would be.

Martin Gray said…
I agree, Chris Roberson's stuff is wonderful. I would love it if DC gave him a non-canon/all-canon Superman book to write. Let the Retroactives have a legacy ...

Siskoid said…
I'd be very surprised if industry professionals at that level ever came here, but your point about Retroactives is a good one. If they'd put a little more effort in the project instead of throwing it in the middle of two other events, it might have had more traction as an idea.

Carl Walker said…
Well, I primarily read comics through the public library (it's like the legal version of bit torrent!) for most of my 5 years of graduate school, so there are other ways, although that wasn't very useful to the industry I imagine.
August 30, 2011 at 3:48 AM