Reign of the Supermen #317: Erok-El the Star King 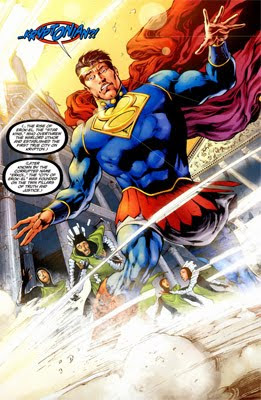 I have no intention of adding every member of the El family to the Reign Roll Call, but since the Flash goes goo-goo in "Grounded" and super-quickly dresses Superman as his ancestor Erok-El, he's fair game. But it's more than that. According to the pre-Crisis mini-series The Krypton Chronicles, Erok-El the Star King (or Erok of the Star) was the first Kryptonian to take the name of "El". He tamed the cannibals of early Krypton and founded its first city thanks to a strength-giving potion. His pet peeve was apparently learning the names of all his ancestors so he could identify himself according to custom, so he invented the surname. "El", meaning "star" would be added to his name, and to the name of all his descendants, first among these, Kal-El ("star-child"). Not our Kal-El, but the ancestor Superman was named after. Most remarkably, both Erkol and Kal I are dead ringers for Superman. 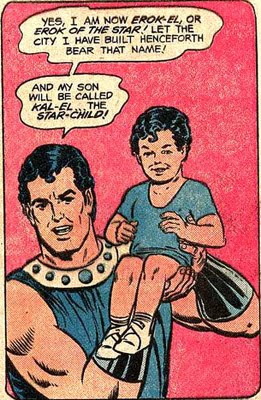 The post-Crisis DCU replaces this history with that of Blood of My Ancestors (Reign #240), which claims the bloodline started with a boy simply called "El". The tales are not necessarily mutually exclusive. Erkol might have chosen the name "El" from HIS first ancestor. In any case, Erkol's appearance here works in the framework of Chris Roberson's theory about continuity (i.e. it ALL happened, even if Superman doesn't remember everything all of the time). Or if you're more conservative about things like that, remember there have been Crises since Blood of My Ancestors, so the history could have been restored.

One question before I go: Is that figure "8" on his chest an archaic way to write the sign of "El" which we usually perceive as an "S"?

Writer Chris Roberson weighs in with interesting behind the scenes information in the Comments. Check it out!
Comics Reign Superman

Chris Roberson said…
Your scheme to get me to post comments by leaving bits for me to nitpick appears to be working!

A couple of quick notes. Those two balloons of "Kryptonian" speech are jam-packed with an attempt to reconcile several different versions of Krypton. As you point out, E. Nelson Bridwell had established in The Krypton Chronicles that Erkol was Superman's first ancestor to adopt the "El" surname; that "El" meant "star" and that "Kal-El" meant "Star-child"; and that Urkol, the oldest city on Krypton, was originally named "Erok-El". But in Blood Of My Ancestors, the beginning of the El family tree is a guy *named* El who fights the warlord Uthor. Since Erok-El HAD fought an unnamed warlord in The Krypton Chronicles, I decided to squint a bit and pretend that the two different stories were simply different accounts of the same person's life, with The Krypton Chronicles being the more-or-less accurate account and Blood Of My Ancestors being the mythologized version that changed over the millennia. So Erok-El overthrow Uthor to establish the oldest city on Krypton, and the symbol of Rao he wore on his chest became the El family crest.

I also decided by fiat to say that "Erok" means "king," so that his name would mean "Star-King" (and so I would have a handy name for him when and if I got a chance to show the Superman Squad visiting him in some future story).

As for the symbol on his chest, that's the Kryptonian letter "S", which has alternatively been established in different comics as meaning "Rao," or "hope," or simply the El family crest. Using Chinese ideograms as a model, which can take on different meanings in different contexts, I figured there was no reason why the symbol couldn't mean ALL those things. Rao is the sun, who is the source of hope, who was championed by the El family.

I spent too much time designing the Star-King's outfit here, considering we only see it for a page. But if you subtract the light blue of Superman's costume, and imagine him with bare arms and legs, what you're left with is something that starts out like the Curt Swan-designed armor from Krypton Chronicles, pushed in the direction of Grecian hoplite armor, with ornamentation and colors that prefigure Superman's outfit.
September 2, 2011 at 10:29 AM

And you simply have to stop* teasing us with the unmade Superman Squad spin-off series. It hurts!

Craig Oxbrow said…
Is dressing unsuspecting people up in short-skirted historical costumes something the Flash does a lot?

Siskoid said…
People with superspeed (Superman included) are prone to moments of super-boredom that make them do some crazy crazy shit.
September 2, 2011 at 10:02 PM