Reign of the Supermen #327: Super-Batman

Why would Superman dress up as Super-Batman? Well, Amalgamonday fans, there's a very good reason!

And here it is.

Uhm... maybe I should say "Mileage may vary." 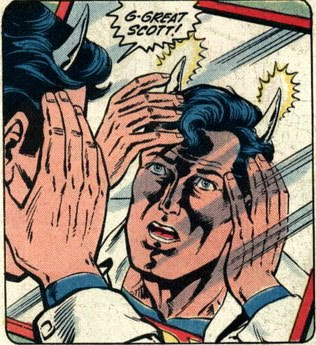 Superman grew horns and needed a costume with horns built-in. Told you it was a good reason.

Ok, ok, here's the skinny: It happens when Clark's co-anchor Lana Lang blows a Pan flute uncovered by her archaeologist father. Why Clark and no one else? Because Pan worshipers of Ancient Greece enchanted the flute to brand a superior being to become their leader. Another blow from the pipes and Superman was healed, but thanks to a pickpocket, it took him a while to find it. That meant wearing hats and helmets and ice packs as Clark Kent, and wearing a spare Bat cowl from the Fortress of Solitude wax museum.

One thing's for sure... You don't want to be on the receiving end of one of HIS batarangs.