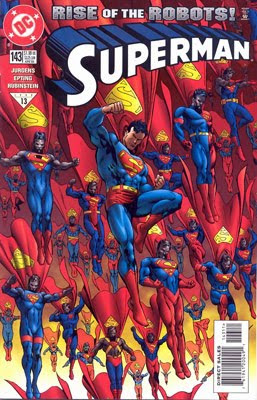 The first tribute to the Superman robots in the post-Crisis universe came courtesy of John Byrne and Jerry Ordway who told the tale from the point of view of the machine. Superman has his hand blown off, and panics because... 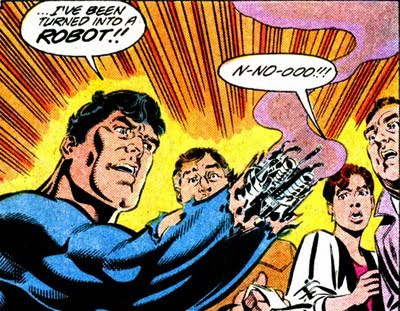 In the middle of this existentialist crisis, "Superman" must save Cat Grant and her son with the help of Lois Lane and Clark Kent. In the end, he sacrifices himself, and the real Superman shows up to explain that he'd had the robot built (by Emil Hamilton) to answer Jimmy Olsen's buzzing watch when he wasn't around, but that this experience made him swear off the idea.

Jump ahead a decade, and under the control of Dominus, Superman builds a whole army of these guys to act as a fascist police force. These guys all looked different, which is cool, and none were meant to look like Superman himself. The JLA chipped in to destroy the robots while Superman fought Dominus, but they still managed to do some damage and pay tribute to the occasional old cover: 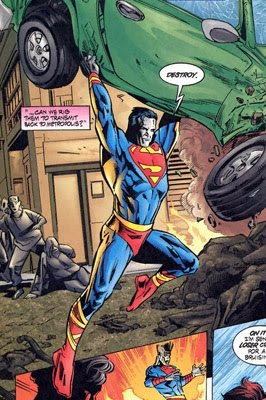 When all was said and done, Superman kept a couple of those robots around as servants for the Fortress of Solitude. One of these appears later this week... I think we're gonna rock a mechanical Superman theme for a few days!
Comics Reign Superman

Wayne Allen Sallee said…
Wasn't that Dominus thing where they had a chance to Superman in the 40s, in the 70s, and the 80s for three-issue series within the titles? DC misses the point on some of their collected material.
September 18, 2011 at 2:49 PM