Reign of the Supermen #344: Superman, Enemy of the Bat 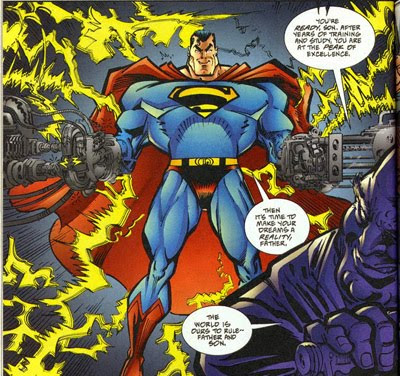 What if Kal-El's rocket crashed in Crime Alley, killing the Waynes instantly? Simple. Young Bruce survives, but is horribly disfigured and swears vengeance on the infant from another planet picked up by multi-millionaire Lex Luthor. Baby Kal-El, raised by Luthor, becomes a gun-toting corporate lackey, while Bruce becomes Batman and gets his hands on the only pieces of kryptonite not disposed of by Luthor. They meet. Bang bang. And Batman uses the last bullet to send himself to his parents. 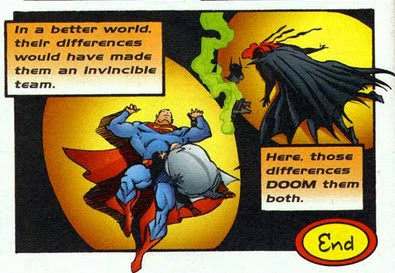 Mr. Morbid's House Of Fun said…
The last comments were funny, and would make for an interesting elseworlds.

This one seems really fucked up, but I'd like to see it expanded upon and more drawn-out before it ends the way it does.

I'd have to agree that if those events really occurred like that, the end result really would work out like that.
September 29, 2011 at 10:17 AM

Siskoid said…
Many of the stories in the 80-page Giant are little more than punchlines to what if premises.
September 29, 2011 at 11:01 AM

LiamKav said…
A lot of them come down to nature vs nurture. It's either "Superman is evil because he was raised by evil" or "Superman is good no matter who raised him because he is good at the core."

Considering that almost every other Kryptonian seems to be an arrogant dick (at best), I think that Jonathan and Martha did a bloody good job with Clark.
September 29, 2011 at 11:50 AM

Siskoid said…
Cultural evidence would seem to point to a "nurture" origin for Superman.
September 29, 2011 at 11:57 AM

Wayne Allen Sallee said…
My eyes are puffy from allergies today, at first I thought you wrote the rocket killed Wayne.
September 29, 2011 at 2:43 PM

chiasaur11 said…
And, after all the dust settles, Booster Gold is the world's greatest hero.