November 15, 2011
So a lot of people were curious yesterday to see just WHICH hairstyle (or brown wig) Linda (Supergirl) Lee chose based on, wow, the 20,000 votes that followed the publication of Action Comics #273. All was revealed in ish #281 (so it took a while to collate): 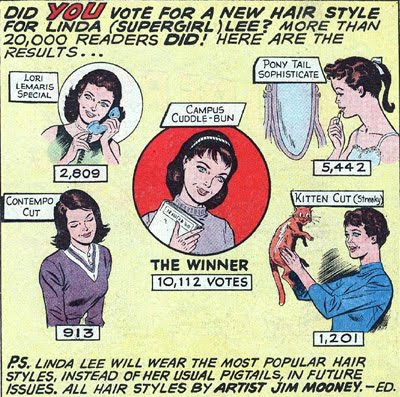 So it was the Campus Cuddle-Bun by a LANDSLIDE! Runner-up was the Pony Tail Sophisticate, which probably only did well because Linda's in her evening wear. Shame 1960s pervs, shame! As for the Contempo cut, which still seems the most modern, it was right out. My internal survey shows that 2011's SBG female fans preferred it exclusively. Of course, my sample wouldn't be called statistically significant. Thanks anyway Joanne!
Comics Supergirl

Arkhein said…
Well - now we know. I guess it shouldn't be a surprise - given the times. But contempo-cut will always have my heart. It's just so damn contempo!

Señor Editor said…
Wow, I can't believe that many people voted on what hairstyle will Supergirl rock in her free time. The thought of over 20,000 kids (at least I hope they were kids) making that decision, writing DC a letter, buying a stamp and mailing it seems just incredible in the 21st century.
They should really keep giving that kind of choice to the readers. Superman's 1990s mullet could have been prevented.
November 15, 2011 at 8:15 PM

Siskoid said…
Or maybe it wouldn't have been.