Batman and the Outsiders #9 - Critical Analysis

December 07, 2011
And you know what I mean by "critical". As promised, December has brought another extra-cruel dissection of a 1980s issue of Mike Barr and Jim Aparo's Batman and the Outsiders. (As recently mentioned in the award-winning Fire and Water podcast - episode 8!) 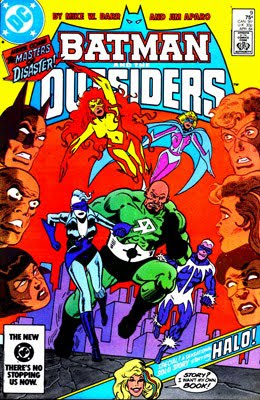 Join me over the next couple weeks as we delve into the first full appearance of the Masters of Disaster. These guys each have powers and code names that have to do with a different disaster. Will we find out how exactly you would go about assembling such a group? Don't bet on it. And do they also play speed metal at a downtown student bar? Again, UNKNOWN!

And look at that, a solo story featuring Halo! And she wants her own book! Bless. She really is the nittest wit in the DCU. And since many readers feel Aparo's art tends to redeem Barr's Outsiders scripts, we'll see what happens when he DOESN'T draw an Outsider (singular) story. It all starts tomorrow, but I doubt we're ready.
Batman Comics Outsiders

Señor Editor said…
Great! This is my favorite feature on your blog. Really looking forward to that!
December 7, 2011 at 4:51 PM

Austin Gorton said…
I'm bummed December left me so crazy I missed this the first time around, but thankfully the internet is always here, so I can catch up now!
January 16, 2012 at 3:13 PM