Bruce Wayne and the Party Crashers

December 20, 2011
Batman and the Outsiders #9 - Pages 9-11
After a fair amount of subplotting (if you can call Katana and Metamorpho getting a bite to eat a "subplot"), we head for where the action is about to take place - a Gotham City ghetto. Of course. And look at that, 1984 is just like the New52! Lots of talk about urban renewal! The more things change...

And who goes to every ceremonial ground-breaking he can? Why billionaire dilettante Bruce Wayne, of course! Partayyyyy!

Well, there you have it. Bruce Wayne loves to drink champagne and eat caviar in the poorest neighborhoods of Gotham, with a blond model on his arm. That's just how he swings. It's not enough to HAVE money, you've also got to RUB IT in people's faces. (But how the HELL is the city spending its money?!) But charity work, right? 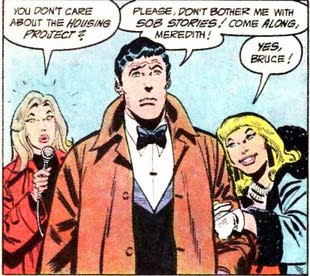 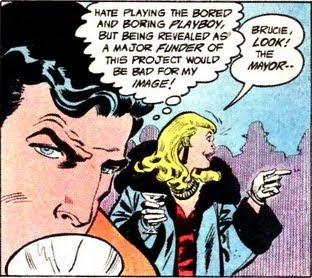 Meredith is a girl who just loves hanging out with socialite types at construction sites in a bad part of town. Bruce sure knows how to pick them shallow. Of course, he's secretly funding this housing project so... did he do so anonymously? Leave a million-dollar envelope on the mayor's doorstep? Since when is this kind of thing kept secret from the media? Sometimes, it feels like you could take down the Batman with a single request under the Freedom of Information Act. And may I also say? Worst reporting job ever (well, until Robin Scherbatsky hits New York). And then it turns dangerous. For gold shovels anyway. Now, how will the mayor defend himself (and his ego, oooh, sarcasm burn!)? 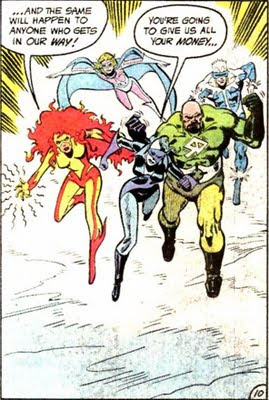 Yes, it's the Masters of Disaster crashing the party of the year by pulling a reverse-Die Hard (1. they're outside and 2. they pose as thieves but have another agenda). Heroes, ACTIVATE! 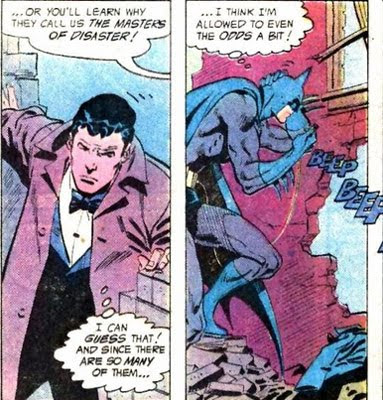 The World's Greatest Detective guesses that "Masters of Disaster" + costumes with obvious elemental themes + Heatstroke melting the only potential battle shovel in sight = Lame Mike Barr villains worthy of the Outsiders. He beeps them, 1984-style. 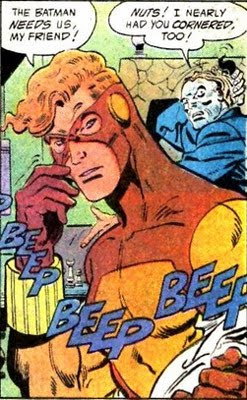 What kind of bedroom games were these two playing? Oh, there's a chess board in the background. Hu-huh, that's what he meant. Hey! How the hell do you cut from Metamorpho going on a date with Katana to THIS? Isn't the whole point of "meanwhiles" to show action is happening more or less simultaneously? Why set up a situation only to ignore it a couple pages later? But since everybody's at home in the following panels, we have to assume the crashed shindig happens later in the day. So Gotham City is also paying overtime for its municipal catering crew? Bruce might want to look into what he's funding exactly. Bet those gold shovels don't come cheap either.

You know, Mike Barr, your subplots run so slow that I can't tell if Halo talking to herself has something to do with HER, or with Katana's sword, or with goblins in the bowels of the Wayne Foundation. 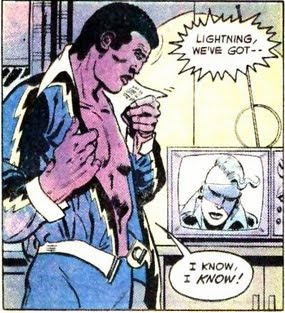 Everybody gets an annoying beep, but Black Lightning at least gets a personal call. Batman can be classy when it comes to people he thinks are real heroes.

Tomorrow: Black Lightning watches the end of that music video on MTV, then heads off to fight the Disasters!
Batman Comics Metamorpho Outsiders

I can't help but picture Meredith as having the same voice as Mayor Diamond Joe Quimby's usual main squeeze.