Doctor Who #12: The Edge of Destruction 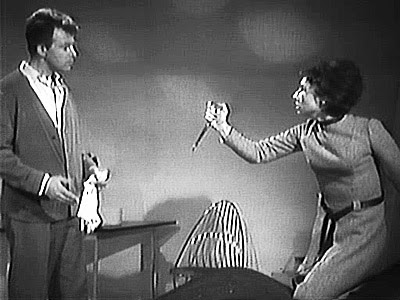 TECHNICAL SPECS: The episode is on disc 3 of The Beginning DVD boxed set as part 1 of The Edge of Destruction (AKA Inside the Spaceship). First aired Feb.8 1964.

IN THIS ONE... A TARDIS accident makes the crew act like they're in a play by Bertolt Brecht.

REVIEW: Sydney Newman's original concept for the show was to alternate three types of stories - past, present, and "sideways" journeys. If The Edge of Destruction is the first example of "sideways", I want to keep going back and forth on a straight line. It's an odd two-episode interlude inside the TARDIS, and there's nothing wrong with that per se (although the actual results may be part of the reason why it wasn't attempted again until just last year). We do get to see more of how TARDISeers might live, where they sleep, what the first aid kit is like. That's not the problem. The problem is that the characters are made to act strangely, and it's too early in the series for that kind of thing. After all, the teacher don't yet trust the Doctor, so it's never clear that he isn't being his old self when his behavior proves sinister. But it's worse than that. It's not clear what their state of confusion is supposed to be like. Amnesia, sure. Emotional detachment, ok. But Barbara falls prey to unmotivated screaming and William Russell goes way too far, turning Ian into an awkward man-puppet out of the theater of the absurd. No, not absurd, it just looks like an improv that's gone wrong, with awkward pauses and improvisers who don't understand what the others are doing. Yes, that's exactly what it looks like.

Whatever intelligence seems to have infiltrated the TARDIS (see Theories for the answer and my conclusions based on that answer), Susan is the most susceptible to it. If not an outright psychic, she has, in the past, shown more intuition than the other characters. Here, it seems a force is possessing her. She speaks in a different voice, lurks in the background observing the action, and infamously attacks Ian with a pair of scissors (though she seems to fight it too). Not a good idea on the a show geared towards children, but quite effective nonetheless. The eerie music and Hitchcockian lighting all help create a sense of unease that hits its peak during that scene.

Once you've seen the second part, you'll understand some of the weird happenings here as "clues" - the scanner's pictures, the melting clocks, the malfunctions, the door opening onto nothingness - but in this first part, they're just frustrating hogwash. There's actually potential in David Whitaker's script, but Richard Martin's direction makes it too surreal for its own good, and once you lose the characters, you've lost the audience as well. It's not like the clues aren't repeated in the next episode. Among the chaos, there is one intriguing bit of character business, and that's the prone Doctor mumbling about not being able to take Susan back. Was she possibly taken aboard against her will? When she asks Barbara to forgive the Doctor, there's almost an unspoken "like I did" in there. It's a relationship the series sadly never really explored. This episode teases us with a possible origin story, but we never get it.

THEORIES: It is half-confirmed in the next episode that the "intelligence" at work is the TARDIS'. I say half because while the various clues are attributed to it, the machine is not blamed for the characters' odd behavior. However, might we not see there the effect of the TARDIS' telepathic circuits - the same ones responsible for translating alien languages right into the characters' heads - trying to communicate with the crew and failing? Humans are just not built for it, so Ian, for example, becomes empty-headed for lack of RAM, a zombie trying to carry out actions (like attacking the Doctor in the cliffhanger) without thought. When Susan is possessed, is she then speaking with the voice of the TARDIS? And is the TARDIS seeing the world for the first time as a humanoid, fascinated, lurking in the shadows as part of Susan's mind? And most importantly, why does the TARDIS attack its human passengers with scissors? Does it see them as a threat because they don't trust the Doctor, the Doctor it needs to get itself fixed? To me, this is what's happening, even though the matter is more or less dropped in the second part. The alternative is that the accident, or the region of space-time where the TARDIS is stuck, is screwing with everyone's minds. I'm afraid that doesn't hold a lot of weight with me.

REWATCHABILITY: Low - A real mess. And annoying too. Thankfully, it's more or less redundant. Skip ahead.
Doctor Who

Tim Knight said…
Now you see I really like this one because it is such a "mess" and there are no definite answers.
December 4, 2011 at 3:19 PM

Tim Knight said…
I'm not that deranged, but I do think The Twin Dilemma gets an unfair bashing.

The all-time worse story though that I can think of, off the top of my head, has to be Time-Flight... I'm looking forward to seeing what you have to say about that ;)
December 4, 2011 at 7:16 PM