December 08, 2011
"Promising paradise, he gave his followers / A potent draught and whilst they slept / Transported them to a vale where / Streams of milk and honey, wine and water, flowed." 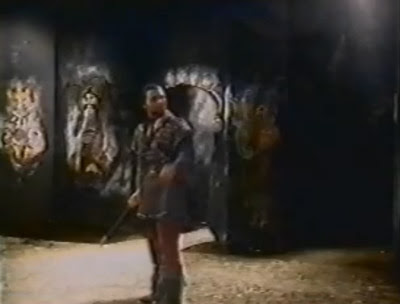 TECHNICAL SPECS: Part 3 of Marco Polo, a story that has been entirely lost. For these reviews, I've looked at the Loose Cannon reconstruction (part 1, part 2, part 3). First aired Mar.7 1964.

IN THIS ONE... The Doctor draws water from the TARDIS, Ping-Cho tells a story to an enraptured audience, and Barbara is captured by Tegana's bandits in the Cave of 500 Eyes.

REVIEW: When we left Marco Polo's caravan, they had lost their water supply and were getting rather dehydrated. Writer John Lucarotti gets them out of the predicament cleverly, by using science (so another good mix of educational science and history - he really gets that part of the show's mandate). The caravan survives on the condensation forming on the interior TARDIS walls (an infinite number of walls?). Between Tegana and Marco, the scene shows how it can be difficult to operate in the past, where even simple science can be interpreted as black magic, or in the case of rational Marco Polo, trickery. Is the serial showing some unenlightened 60s attitudes in its portrayal of a level-headed European "hero" and a superstitious and brutal Asian "villain"? One this is for sure, neither is stupid. And we do have the charming Ping-Cho to balance Tegana's treachery.

Once the thirst dilemma is resolved, we're back into the story's leisurely mode. Ping-Cho tells a story/poem about the Hashashins (Doctor Who was talking about hashish, albeit in historical context, as far back as 1964 - how adult) that may or may not mirror the Doctor's kidnapping of his companions, and Barbara later visits some caves. It's time travel as tourism. And wouldn't it be like that? At this early stage, the show has yet to settle into its "quick adventure and let's get out of here" format. The setting is allowed to live and breathe, with no indication as to when our heroes will be able to leave it. Obviously, it'll have to be after they meet the Khan, but that seems a long way away. In the meantime, the Doctor touts his superior intellect (something that's remained a constant through most incarnations), Ian teaches us about the etymology of the word "assassin", Barbara gets into trouble and Susan does a bit of screaming.

Seeing the Cave of 500 Eyes for the first time in the video reconstruction, I'm a little surprised. I'd always imagined it as an actual cave, not a set with obsidian walls. Still, it's an unusual space, and probably not unlike actual Chinese landmarks of this type (studio floor allowing). The city of Tun-Huang, just as studio-bound, looks a lot like Lop, a simple outpost, did, but we shouldn't ask too much of the production, though a sense of those remarkable temples would have been nice. The set dressing is quite nice though, and the Silk Road appears to be well-traveled and almost cosmopolitan, with its Westerner bandits, Mongol warriors and stories that originated in Persia. Lucarotti paints a complete world, not an isolated land and time.

REWATCHABILITY: Medium-High - The historical detail and sense of setting more than make up for the story's slow pace.
Doctor Who