December 13, 2011
"She was a bit frightened at losing her shoes but she's gone back to the ship for another pair." 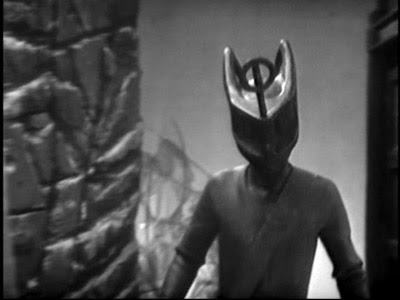 TECHNICAL SPECS: The story has been released on DVD as The Keys of Marinus. This is part 1. First aired Apr.11 1964.

IN THIS ONE... The TARDIS arrives on Marinus, on an island surrounded by acid. They meet the evil Voord and poor, old Arbitan who asks them to find the hidden keys to his mind control device so he can bring order to the planet again.

REVIEW: My complaints that writer Terry Nation is a one-trick pony are reawakened in the first chapter of his Keys of Marinus. Though the structure is new - though he'll use it twice more - a chase/quest across multiple environments stretching the serial budget beyond reason, it feels like we're right back in The Daleks. Our heroes arrive in a blasted, deserted wasteland, find signs of civilization, get lost and/or captured in a maze, and learn all about the dangers of not getting along. Susan once again is the only one who knows they're being stalked, though this time, it's by the evil Voord (nowhere near the Daleks' cachet, but I like their look - monsters that are scripted as rubber-suited). Not to say there aren't things to enjoy. Instead of the petrified forest et al., we have glass shores on an acid sea, cool personal submarines, trap doors aplenty, and the ridiculous effect of a flat cardboard Voord falling down a pit (unsurprisingly, I love this). And because we'll soon leave this environment to go looking for some keys, we explore it that much quicker.

I do take issue with some of the writing. Should the Doctor think the Conscience of Marinus - a device made to pacify men's minds on a global scale - is a good idea? Since Arbitan holds the TARDIS hostage, our heroes will have to gather the keys anyway. So why make them sympathetic to Arbitan's cause? As we'll see again and again, the Doctor is a force against mind control in all its forms. George Coulouris gives us an Arbitan with can at least sympathize with. He's alone on that island, and even his daughter hasn't come back from the quest. His performance goes a long way making the entire enterprise palatable because you really do feel sorry for him. But of course, he gets bumped off almost immediately. A lot of people and places will turn out to be disposable in this serial.

I do like Ian's "let's just get on with it" attitude. Looks like he's read the script and doesn't think much of it either. Re: Continuity, Barbara refers to the Aztecs again when contemplating the island's pyramid, so it's really not too far-fetched that a school teacher would have that expertise in the next serial. It's evidently a passion of hers. By this, their fifth serial, the companions actually manage a chuckle at the fact they're still not home. Hartnell fluffs a LOT of dialog in this episode, almost every line, and appears distracted throughout. It's a sign of this to come, but atypical of his performances thus far. Is the fluffing directly proportional with his interest in the script? All this one has him do is jump to conclusions about almost every topic. And then there are absurd "techie" moments that always seem to crop up in Nation's scripts, like the poorly mimed forcefield around the TARDIS, or the joke(?) about its broken color television.

THEORIES: When acid dissolves one of Susan's shoes, she FREAKS OUT! Now think ahead to the introductions of both the 3rd and 8th Doctors and their early obsessions with finding shoes that fit. Is this a common Time Lord trauma? Is it perhaps the hardest thing about regeneration, or culturally significant in some way? Susan hasn't regenerated yet (and some will argue she's not even a Time Lord), but already, losing footwear seems of major import. What is it with Time Lords and shoes?! (I'm just kidding, but it's more fun to imagine Susan's freak-outs have some kind of justification, no?)

REWATCHABILITY: Medium-Low - A reasonable start to a new adventure, with good sets, creatures and effects, but it seems like we've already seen something like it this season. Much of the script sounds wrong-headed.
Doctor Who

LiamKav said…
Regarding shoes: don't forget that the 4th to 5th Doctor regeneration also saw his shoes changing. Mistake, or CONSPIRACY!?
December 13, 2011 at 10:37 AM