December 25, 2011
"No opinion can be worse sometimes than a very dogmatic one." 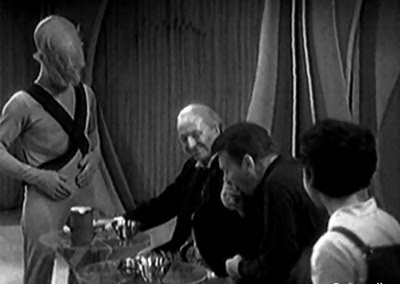 IN THIS ONE... The Sensorite Elders agree to meet the Doctor's party, but their City Administrator doesn't trust them and tries to kill them.

REVIEW: We continue to learn more about the Sensorites, but there's a lot of repetition in this episode, a sure sign of padding. We discover they have a caste system they are quite content with, and that "Sensorites" are only one of these casts (presumably the telepaths, but they look the same as the Elders). They fear physical confrontations and are defeated by the Doctor armed with a light switch. Their Elders aren't any more stylish though they accessorize with black sashes or collars, according to their rank. It's a handy way to tell them apart, but the writer really should have resisted the urge to explain all this to us. It's part of the script's redundancies. Sometimes information is repeated, and sometimes it's just not necessary. We got it. Pretty obvious, really. We don't see much of the planet, but it's a welcome break from the dreck that is the ship. One the Sense-Sphere, there are no sharp angles. Everything is rounded (perhaps the designer's inspiration was the word "Sphere", but it does make at least one room look like a TARDIS interior full of roundels), and the buildings outside, as seen rather quickly through a window, makes me think of the town of Bedrock, for some reason.

The most important piece of information, however, is that the Sensorites were burned by humans some years earlier when five people came to the Sense-Sphere and started fighting each other over the planet's riches, a fight that ended in an atmospheric explosion that released a deadly disease into the air (there's an echo of the Aztecs' final fate in there - I wonder if it was on purpose). It doesn't take a genius to figure out Ian's been infected with it via tainted water in the final scene, nor that the water carries the disease (the characters aren't as quick the audience on this one). It's one of two ploys by the distrustful City Administrator (who seems to be third in the Elder hierarchy) to kill the landing party against orders. It's a better one than the dreadfully slow disintegrator scheme that sounds like the Sensorite version of bingo (and which our heroes have no hand in stopping). Skip the system checks, next time, sheesh! (The heroes' eating scene isn't much better as things start slowing to real time again.)

When the plot is slow and the dialog repetitious, I seek refuge in the character moments. It's unfortunate that Susan isn't allow to fulfill the promise she made in the previous episode. She's instead absorbed in a larger party and returns to being under-utilized. It is interesting however to see a bit of teenage rebellion in her, and her first argument with her grandfather, ever. She's growing up and he's not liking it. Barbara, the "mother", understands this much better, of course, though she's left aboard the ship with Maitland. It's Jacqueline Hill's turn to go on holiday for a couple weeks (she'll be missed). Ian's role isn't much more than choking on plague water though. Even Carol and John get bigger parts, she seeing her love slipping away, and he, promised a cure to his affliction, sensing good or bad through the haze of his madness.

REWATCHABILITY: Medium-Low - It's a lot of people, some in masks, some not, standing around and talking, often making points they've already made. Rather dull.
Doctor Who