Doctor Who #39: A Change of Identity 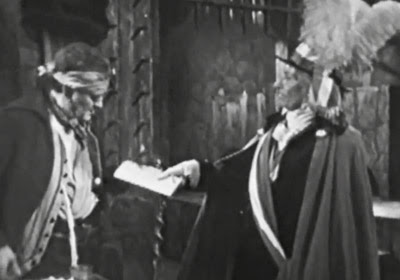 IN THIS ONE... Barbara and Susan are liberated by rebels and Ian escapes the Conciergerie, so they're not there when the Doctor shows up disguised as a regional officer to bust them all out.

REVIEW: What I like about The Reign of Terror is how subversive it is. In the midst of the French Revolution, it has its own little revolts, subverting audience expectations. Historicals have thus far been rather ennobling of the era represented, a heightened, even Shakespearean reality. Not this version of France, though. As the Doctor walks into Paris, he wrinkles his nose at how it stinks (much like Barbara did at the jailer's breath in the previous episode), old women run around coughing loudly, and you half expect the contents of some chamberpot to come splashing down on him. It's an earthy, smelly version of history. But it's still not a realistic one. Melodrama and comedy jostle with the very real threat of public execution. It's a fiction. But writer Dennis Spooner subverts that element too. We're naturally expecting the Doctor to bust his friends out of prison, but by the time he gets there, they've already escaped!

The plot leaves some things to be desired, however. For example, it strains credulity that a tailor shop would have badges of office the Doctor can use to fool the authorities. They're just asking for impostors. Ian also seems to delay his escape upon seeing the girls taken to the guillotine. While the piece of business with they key is well worked out (and I like how Ian's presence was kept strong despite the actor being on holiday), it still means the girls are probably dead by the time he gets out. You would have thought he'd have taken more of a risk in that situation. Then there's the traitor among the rebels, who pretty much has to be Léon because there's no one else. I could be wrong, of course, but from this episode's point of view, there's no mystery to the mystery. And of course, there's the matter of Susan being more than useless in this episode. What's wrong with her? (See Theories.)

What I can forgive is the melodramatic coincidence of how Barbara and Susan are rescued by the same people who got Rouvray and D'Argenson (from episode 1) out to that cottage. Somehow, it's like something out of Victor Hugo (an author I dislike, but still relevant to the period). Speaking of plot twists, there's also Lemaitre who seems to predict the jailer will end up jailed (will he?) and his letting Ian escape so he can lead him to the mysterious Sterling. It's hard to care about this subplot because it's unfolding so slowly, but events to date have shown that it's all connected. It's the Doctor who gets all the best scenes though, as he talks circles around the shopkeeper and the jailer, although the former isn't really fooled as we find out in the cliffhanger. It's also the first time the Doctor uses forged papers, but we're still very far away from psychic paper.

THEORIES: It's not really addressed, but following The Sensorites as this story does, we have to wonder if there isn't a connection between the Sensorite telepathic field and Susan's constant headaches. Might her brain have been damaged by the telepathic activity? Or might she even be in withdrawal? (Of course her illness can just be the result of having been thrown into a drafty 18th-century jail, but she's uncharacteristically irritable very early on, and "Theories" is all about over-analyzing stuff.)

REWATCHABILITY: Medium - There are too many plot holes to wholeheartedly recommend this episode, but it has amusing scenes and a diverting structure.
Doctor Who