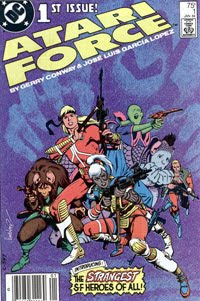 When it was new: Atari Force was published by DC Comics for 20 consecutive issues between 1984 and 1985, with a Special in 1986. The first 13 issues were written by Gerry Conway, with art mostly supplied by José Luis Garcia Lopez, with Mike Barron and Eduardo Barreto taking over after that.

Premise: By the year 2028, humanity has resettled on New Earth, somewhere in the wide multiverse. Atari Force tells the story of a group of human and alien outsiders who face incredible odds to destroy a threat to all existence, while their own people are after them for stealing the ship Scanner-1.

Insert cartridge: I have no doubt that Atari Force's uncollected status is due to the long-lapsed licensing agreement with Atari, relegating this book to publishing limbo like Rom Spaceknight and the Micronauts. Not that is has very much to do with Atari aside from the name, the logo, and the fact the forgettable first volume of the comic came out in specific Atari 2600 cartridges (the whole story is retold in volume 2 as flashbacks, no worries). It's too bad, because its 20 issues represent a complete story with art by a handful of comic book rock stars.

Somehow, Conway and Barron have managed to craft a space opera with characters that have powers, abilities and code names (or at least a cool Will Magnus pipe) that would fit superheroes, without turning it into a superhero book. It's pretty obvious the focus was originally going to be the strained relationship between space explorer Martin Champion and his multiverse-powered son Chris, until the sexy mercenary Dart and her tragic love story with the one-eyed Blackjak pulled much of the attention. Which is awesome because Dart is a kickass female character. Joining them on the mission to find and stop the Cthulhoid-made-flesh Dark Destroyer are: Morphea, the charmingly sympathetic empath; Babe, a baby mountain (at least, that's what these aliens eventually become); Pakrat, a rat-like thief and frequent comic relief; the pet-like Hukka; and late-comer Taz, whose secret will surprise the reader. It's a full generation after the events of the first series, and the first year's arc ends on an epic note, after which Mike Barron takes over as writer, dealing with the aftermath and more resolutions. The series has a definite ending, albeit an open-ended one if you care to let your imagination run away with it. The 1986 special is somewhat disappointing, but it keeps the integrity of that ending by taking place at different points before it. There's an origin story for Dart, a Hukka comedy piece, and a lackluster story where the whole Force appears. 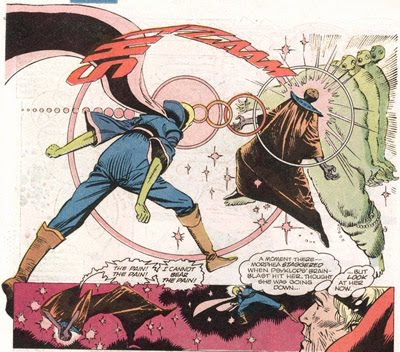 But as competent as this series is, it wouldn't be anywhere near as good without its unusually strong sense of design. Lopez's work is simply wonderful, full of innovative page layouts, dynamic action and detail. When he takes a breather for issues 4 and 5, he still inks over Ross Andru's more traditional pencils. Barreto definitely follows the style Lopez brought to the Atari universe, and when the book started doing comedic back-ups with some of its goofier stars, editor Andy Helfer brought in the big guns: Keith Giffen and Marshall Rogers on the Hukka (not simultaneously), Klaus Janson on Babe, Mike Chen on Pakrat, and Ed Hannigan on Taz. The unsung hero of Atari Force, however, is letterer Bob Lappan, who integrates sound effects into the art and creates more than a dozen alien languages and accents on the fly. Without him, the book would simply not have worked as it does, as evidenced by the Special, where his absence is deeply felt.

Trade in for one of the New52? Oh, for sure. I'd happily do away with something like Red Lanterns (trading aliens for aliens) to read such beautiful work.
Comics Old52

De said…
I've always meant to go back and read this. My only exposure was in the mini comics (beautiful art but so bloody boring) that came with the game cartridges and the Who's Who entries.
December 29, 2011 at 9:44 AM

Randal said…
I have this series in the ol' arcives, during a time I decided to get entire runs of licensed comics. ROM, Micronauts, Transformers, GI Joe, Star Wars, Star Trek (OK,I didn't manage to get all the Star Treks), Conan (I did manage to pull that one off...
I love Conan), MASK, V, half the Star line, it seemed...came to my senses when I tried to track down Married With Children.

Anyway, loved Atari Force. You're missing the Star Raiders graphic novel though!
December 29, 2011 at 11:52 AM

wgungfu said…
The entire series came to be because both companies were owned by Warner Communications at the time. Warner tended to leverage multiple subsidiaries at the time on projects. Hence the Swordquest project with both DC Comics, Atari Inc., and another subsidiary the Franklin Mint. Atari went under in '84 and it's pieces sold off, hence the license expired and so did any more tie-ins.
December 29, 2011 at 12:46 PM

Siskoid said…
Awesome historical insight, wgungfu! I did wonder why they even tied the book to Atari given how small the relationship between the story and the game company was.
December 29, 2011 at 1:00 PM

Anonymous said…
Thanks for the review. Atari Force has always been my second favorite comic next to the Legion of Super-Heroes. It's life was cut way too short, but these 21 issues plus the related Star Raiders graphic novel are an excellent read!
August 16, 2013 at 9:59 AM